What the Supreme Court’s move means for EPA climate rules 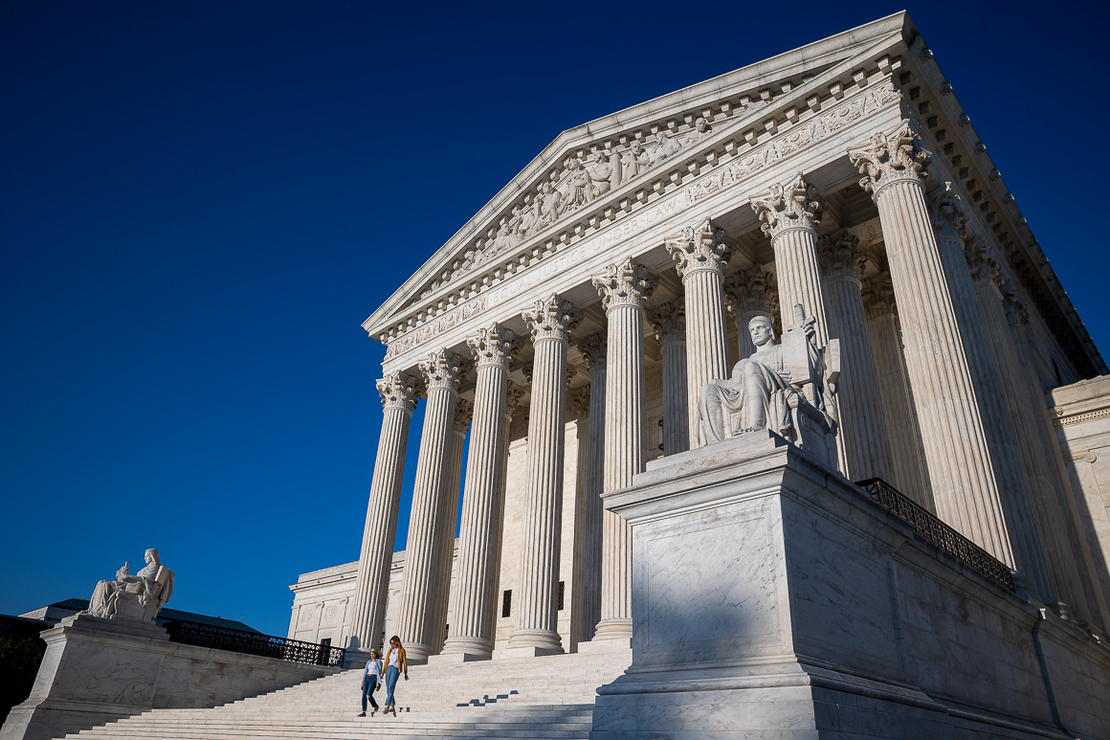 The Supreme Court may be poised to put new guardrails on the Biden administration’s climate agenda after justices agreed last week to consider the extent of EPA’s authority to regulate carbon emissions.

The court sent shock waves through the legal world when it agreed Friday to consider a consolidated challenge from Republican-led states and coal companies. The challenge stemmed from a federal court ruling that struck down a Trump-era regulation gutting EPA’s climate rule for power plants (E&E News PM, Oct. 29).

When the justices issue their ruling in the EPA case, which is expected by next summer, the decision could provide the first indication of how the court’s new 6-3 conservative majority will approach questions of the federal government’s role in curbing global climate change.

“This is likely to result in one of the most significant environmental rulings the court has ever reached,” said Robert Percival, director of the Environmental Law Program at the University of Maryland’s law school.

The court’s decision could place new limits on how expansively EPA can interpret its authority to use the Clean Air Act to address climate change.

Friday’s order coincided with the beginning of global climate negotiations at the 26th Conference of the Parties, or COP, in Glasgow, Scotland. It also comes as Congress is negotiating a Democratic spending package that would pump more than $500 billion into addressing climate change. The Biden administration’s goal is to cut U.S. greenhouse gas emissions in half by 2030 and put the electricity sector on a path to zeroing out carbon emissions by 2035.

West Virginia Attorney General Patrick Morrisey (R) praised the justices’ decision to review the ruling earlier this year by the U.S. Court of Appeals for the District of Columbia Circuit, which scrapped the Trump administration’s Affordable Clean Energy rule and handed the Biden team a clean slate to draft a new regulation for coal-fired power plant emissions (Greenwire, Jan. 19).

“This is a tremendous victory for West Virginia and our nation. We are extremely grateful for the Supreme Court’s willingness to hear our case," Morrisey said in a statement Friday.

"This shows the Court realizes the seriousness of this case and shares our concern that the D.C. Circuit granted EPA too much authority," he continued. "Given the insurmountable costs of President Biden’s proposals, our team is eager to present West Virginia’s case as to why the Supreme Court should define the reach of EPA’s authority once and for all."

"The courts have repeatedly upheld the EPA’s authority to regulate dangerous power plant pollution," she told reporters on a call. She noted that the appeals court had struck down the Trump-era rule that would have weakened power plant regulations.

McCarthy said the White House is confident that the Supreme Court will rule in a way that affirms that “EPA has not just the right but the authority and responsibility to keep our families and communities safe from pollution."

Critics of the Supreme Court decision to hear the case said that in most instances, federal courts wait for an agency to enact a rule before they weigh in on a legal controversy around the agency’s power to regulate.

"In that sense, this seems like a power grab. But we don’t know yet," said Bethany Davis Noll, executive director of the State Energy & Environmental Impact Center at New York University School of Law.

Instead of reinstating the Obama-era Clean Power Plan — which interpreted the "best system of emission reduction" to include emissions trading or shifting generation to renewable energy — EPA under Biden opted to start from scratch. The power sector has already surpassed the 2015 Clean Power Plan’s emissions reductions target a decade early.

The agency under Biden has yet to publish a draft proposal, and observers says it may now choose to wait for the Supreme Court’s decision before writing a new carbon rule.

EPA did not respond to a request for comment on the Supreme Court’s order but agency Administrator Michael Regan defended the agency’s authority Friday on Twitter.

Several observers said the Supreme Court’s eventual ruling in the case could be limited to power plants, while others predicted a bigger blow to emissions regulation for other sectors.

"The issue just gets dumped back in Congress’ lap," said Jeff Holmstead, a partner at the law and lobbying firm Bracewell LLP, of the possible consequences of the court’s limiting EPA’s power.

"Any kind of meaningful regulatory program could be well off the table," he said.

A more concerning — but less likely — possibility would be if the high court used the case to more broadly undermine the regulatory authority of federal agencies.

"It’s possible that what the court is seeking to review here is Section 111(d) itself," said Michael Burger, executive director of Columbia Law School’s Sabin Center for Climate Change Law.

He referred to the part of the Clean Air Act that EPA used to regulate carbon emissions from existing power plants under former presidents Obama and Trump.

"If that’s the case, the broadest threat here is not just about climate change, or about EPA’s authority, but it’s about the power of the court to review congressional authorizations of agency action," he said.

In a worst-case scenario, the high court could give itself authority to tell Congress "in almost any instance" that it has to be more specific about delegating authority to agencies, Burger added.

In their petitions to the Supreme Court, the coal companies and states targeting EPA’s power to regulate raised concerns about whether Congress had clearly given the agency the authority to address utility emissions on a broad, systemwide basis.

The challengers also asked the justices to weigh in on whether Congress could lawfully allow EPA to act on emissions under Section 111(d) of the Clean Air Act under the non-delegation doctrine, which says that lawmakers cannot hand off their legislative authority to executive agencies. The Supreme Court’s conservative wing has expressed interest in reviving the long-dormant legal doctrine.

That argument could threaten not only Biden’s rule proposals, but also existing regulations.

The challengers have also cited the major questions doctrine to argue that Congress did not give EPA enough specific guidance under the Clean Air Act to craft a rule that allowed it to impose regulations beyond technological fixes that could be applied to an individual power plant.

D.C. Circuit Judge Justin Walker, a Trump appointee, cited the doctrine — which says that the nation’s most significant economic and political questions should be addressed by Congress, not the executive branch — in his dissent from the court’s ruling this year that struck down the Affordable Clean Energy rule.

The Trump regulation championed power plant upgrades “inside the fence line” of existing facilities and argued that broader strategies like generation shifting and emissions trading regimes were not permitted under the Clean Air Act.

The Supreme Court had initially said in its Friday order that it would consider whether EPA could regulate carbon emissions in one part of the Clean Air Act, if it was already regulating the sector under a separate provision of the statute.

A short time later, the court quietly changed its order to remove that question.

“If [the court] adopts the most restrictive view of EPA’s authority, namely that any rule with major economic consequences requires explicit unmistakable delegation of power from Congress with clear limiting principles to prevent abuse, that could have very broad implications for public health and environmental regulations across the board," he said.

In its initial order, the court had agreed to a coal company’s request to consider whether EPA could regulate power plants at all under Clean Air Act Section 111(d) if the sector is already controlled under Section 112, which requires EPA to set maximum hazardous air pollutant emissions thresholds for major sources.

Opponents of the Obama-era Clean Power Plan have maintained that the "best system of emission reduction" applies only at the facility level.

"EPA cannot use that to force one facility to shut down in favor of a different type of facility (which may not even exist yet) that EPA likes more," Devin Watkins, an attorney for the Competitive Enterprise Institute, said in an email.

"The Clean Power Plan interpretation gives EPA a massive amount of power to reshape the entire economy as it sees fit, rather than focus on just ensuring the best technology available is used at the existing facilities," he added.

Yet despite the Supreme Court showdown, some legal analysts were optimistic that the Biden administration could impose carbon regulations on the electricity sector.

"I do think it probably complicates EPA’s job and potentially disrupts the momentum that the administration is trying to build around their climate regulation and climate policy efforts," said Hana Vizcarra, a staff attorney at Harvard Law School’s Environmental & Energy Law Program.

She noted that EPA was already thinking about how to craft a rule that is likely to survive a challenge before the conservative-dominated Supreme Court. The agency will now need to consider whether it should move forward with a proposed rule as planned or wait to see how the Supreme Court comes down in the case.

"They probably were trying to move relatively quickly, knowing that the administration has some very aggressive goals they want to show action on," she said.

Legal experts had expected the Supreme Court to rule at some point on the extent of EPA’s authority to regulate greenhouse gases.

One silver lining for EPA may be that the agency will get an answer about the court’s views sooner rather than later, said Holmstead of Bracewell.

“This is unusual, but it actually probably saves EPA a lot of time and effort," he said. “I think they just have to put pens down until June.”