What tips the scales in America’s favor 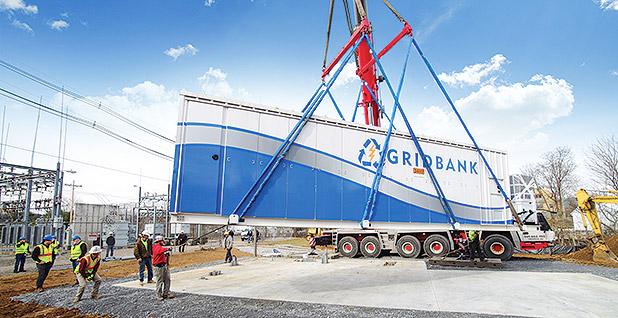 The sheer weight of energy storage, like this 90,000-pound container by North Carolina's Alevo, could influence where tomorrow's industry grows. Photo courtesy of Alevo.

At a retired tobacco plant in North Carolina, a company called Alevo offers a weighty argument for why an energy storage industry could flourish right here in America.

Its production line assembles the GridBank, a box the size of a shipping container intended to help utilities manage output from wind or solar farms, or perform many other tasks for which electrical storage can be useful. It holds enough lithium-ion batteries to power 1,000 typical homes for an hour and weighs 90,000 pounds — as much as 20 Tesla Model S sedans.

"The negative side of our technology is that we’re heavier than most," said Chris Christiansen, the company’s president. "Transporting that around is obviously something we spend a lot of time thinking about."

That straightforward fact — batteries are heavy — is starting to assert itself as a factor in where the multibillion-dollar energy storage industry will grow. It pencils out to ship lithium-ion batteries from South Korea or China when the battery is small, like in a phone or a laptop. But as batteries move into powering cars and a serious role on the electric grid, the equation changes.

"It doesn’t make sense to take the thing that is half the size and weight of the car and ship it over an ocean," said Danny Kennedy, the president of CalCharge, a California battery trade group.

In the case of Alevo, the battery’s weight carried a lot of, well, weight in determining the location of the factory. The Swiss company chose this former Philip Morris tobacco factory as its first commercial-scale location because it has cavernous space for growth but also because it had a rail spur. The weight, Christiansen said, influenced the GridBank’s design, with the racking systems and tray assemblies designed to handle the G-forces exerted by a freight train going around a bend.

These battery cells, and the ever larger packs that hold them, need to be made with exacting care. Lithium-ion batteries are like any other piece of electronics in that they need to be made to high standards. But unlike other electronics, batteries can overheat and explode, as happened with Samsung’s Galaxy Note 7 phones, which turned into a corporate disaster.

Taken together, the poundage and the demands of quality control might tip the scales away from Asia and toward domestic production.

Company executives interviewed for this story say that, even at this early stage in the industry, the weight and complexity of batteries are exerting a slow but steady gravity on decisions about where to make them and how to move them.

One example is Ford Motor Co., which assembles the batteries for its hybrid cars, like the C-Max and the Fusion, at its Rawsonville plant in Ypsilanti, Mich., and trucks them for installation to two other factories that are 15 and 25 miles away.

"That’s because they tend to be large assemblies," said Ted Miller, the automaker’s senior director of energy storage strategy. Also, he added, "we can handle some just-in-time demands of manufacturing that way."

The decisions by today’s carmakers are all over the map. Nissan Motor Co. Ltd., whose all-electric Leaf has a battery of 660 pounds, puts it together at its plant in Smyrna, Tenn. General Motors Co. splits the difference, having its 960-pound Chevy Bolt assembled and shipped from LG Chem Ltd. in South Korea but making its hybrid batteries in Michigan.

Every model of hybrid and electric cars has its own peculiar battery. Its design is as central to the manufacturing process as the internal-combustion engine has been for over a century.

"You can’t imagine a Ford or GM if they hadn’t built engines 40 or 50 years ago," said Alex Luce, the program manager of CalCharge.

That integration — the need to closely customize a battery to its eventual use — is drawing the design studio in closer proximity to the factory floor and further increasing the likelihood that both will happen here.

No better example exists than Tesla Inc., which has put extraordinary attention on the processes it uses to make its batteries and cars. It has pioneered robotic techniques in order to make both its batteries and its cars as inexpensively and quickly as possible.

"In the future, the factory will be a more important product than the car itself," Musk said on a recent call with investors.

And that brings us back to weight. Tesla’s batteries are tremendously heavy — 1,200 pounds for a Model S, more massive than the 660-pound battery pack of the Nissan Leaf and the 960-pound pack of the Chevy Bolt.

Moving all that poundage was a factor in the company’s decision to locate its plant in Sparks, Nev. A spur off the Union Pacific rail line runs right into the Gigafactory. When the company begins production of its mass-market sedan, the Model 3, the batteries will be sent by train directly to Tesla’s auto plant in Fremont, Calif.

Poundage will probably become part of the equation also for Ford, which has said it will invest $4.5 billion to create 13 models of electric cars.

"Once you get to high volumes, you really start to look at shipping costs," said Miller of Ford. At that point, "North American plants for North American cells will be obvious."