What to expect from Interior’s oil report 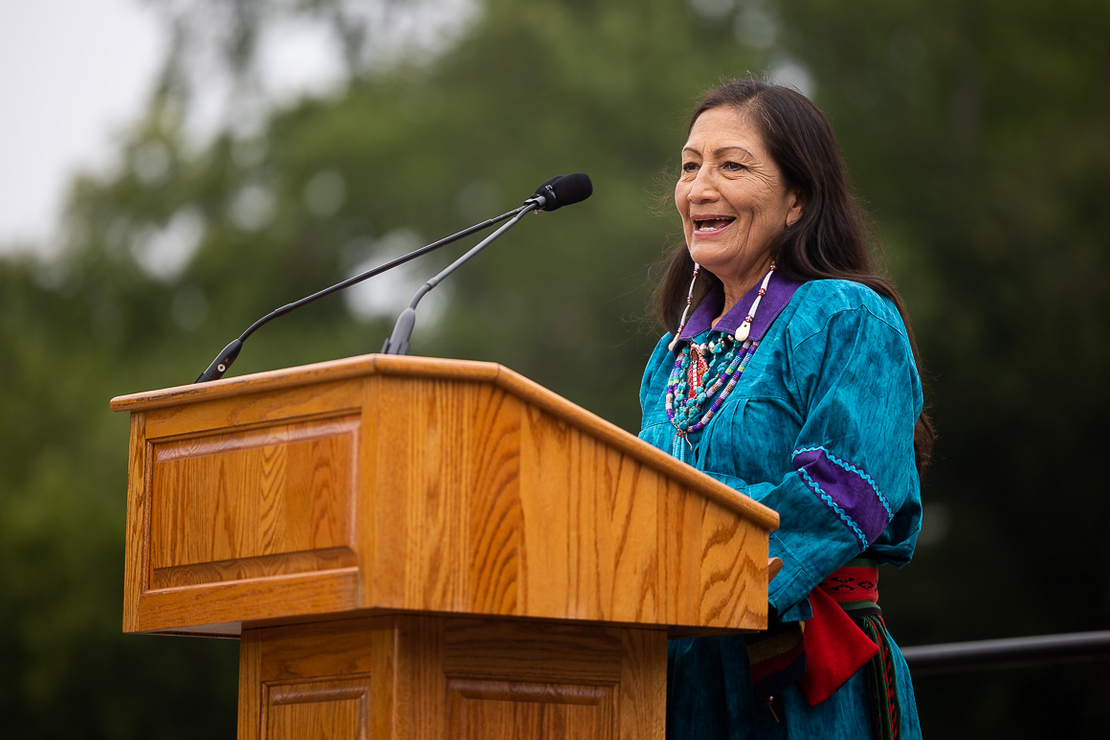 Interior Secretary Deb Haaland speaking on the National Mall last week during an event commemorating the delivery of a totem pole from the Lummi Nation to the Biden administration. Francis Chung/E&E News

At a budget hearing on Capitol Hill last week, Interior Secretary Deb Haaland faced few questions about line items in her department’s budget request. Instead, several Republican lawmakers grilled her about an oil and gas report due any day from the White House.

It’s expected to offer a first glimpse at the kind of changes the Interior Department could make to the fossil fuel program on federal lands and in offshore drilling areas, like the Gulf of Mexico.

States with significant income riding on federal crude oil and natural gas production have been some of the most vocal in demanding answers about the report’s contents and its timeline for publication, which Interior promised by early summer. Their lawmakers have also been the most incensed over an apparent delay in the report’s release and any reforms that could slow the flow of crude.

“I hope you can sense the frustration so many of us have in anticipating this,” said Alaska Sen. Lisa Murkowski (R), a champion of fossil fuel development, after Haaland parried several attempts by GOP lawmakers to extract details or a sense of timing of the report’s release.

The lawmakers’ irritation underscores how much importance has been laid on this report, which is set to shed light on the Biden administration’s possible paths for revamping a 100-year-old oil and gas program.

Interior officials have been tight-lipped on what it might contain, and their communications staff members have adopted a refrain of “no update” when asked about the report’s release.

Still, there are hints about what could be coming, whether from the few brief public statements from Interior staff or long-standing policy suggestions percolating among think tanks and conservation groups, including those with the administration’s ear.

“We’re seeking to restore balance on public lands and waters,” said Laura Daniel-Davis, the Interior Department’s principal deputy assistant secretary for land and minerals management, during a March forum on the review. “We’re facing serious challenges onshore, in the form of a contribution of fossil fuel development to climate change, including methane emissions from operations and addressing idled and orphaned wells. In the offshore program, we also need to ensure that we’re driving down the emissions, protecting marine life, and that the program serves the interest of taxpayers.”

With the report due “soon,” according to Haaland, here are two policy changes that experts believe the Biden team could be weighing — and another that many expect is already off the table.

The one policy change the Biden administration has already flagged as likely is raising royalty rates.

Not long after taking office, President Biden signed a climate order that required Interior to begin a comprehensive review of the oil program, while also ordering a temporary pause on new leasing during the assessment. A task specifically named in that order was whether royalty rates should be changed to account for the climate impacts of drilling.

One-hundred-year-old royalty rates are a long-standing grievance of conservation groups and government watchdogs like Taxpayers for Common Sense, which reported last year that raising the 12.5% royalty rate for onshore oil and gas production to 18.75% — the rate already paid by federal producers offshore — would bring in an additional $12.4 billion in revenue.

Industry members are anticipating this as a possibility and raising flags that it will cripple their businesses.

“Any increase in royalty rates, the cost of doing business from a regulatory standpoint, could be devastating,” said Paul Ulrich, vice president of government affairs for Jonah Energy, an operator in the largest federal gas-producing basin in the United States, the Upper Green River Basin in Wyoming, during a forum held last week by House Natural Resource Committee Republicans.

In an interview, Ulrich said he had spoken with Nada Culver, the acting chief of the Bureau of Land Management, about this issue and acknowledged some nervousness around the possibility of regulatory change. But he said he thought the administration was going to have to balance other priorities, too.

“They are certainly going have to weigh conservation values and find that delicate balance between conservation efforts and protecting and enhancing responsible development,” he said. “It’s critically important for a state like Wyoming for that balance to exist, and frankly, I think it’s important for the federal government.”

2. Other fees or requirements?

Of course, raising royalties — which advocates say is a matter of fiscal responsibility — isn’t the only way the administration could place a price tag on climate impacts.

Brian Prest, an economist with Resources for the Future, an energy and environmental policy think tank, suggested that Interior might ask to levy a cost-of-carbon fee on federal production.

Researchers have assessed the social cost of carbon pollution at roughly $50 per ton of carbon, something like $20 per barrel of crude oil.

That price — an accounting of the negative health and environmental impacts of burning crude oil and natural gas — is so expensive that it’s unlikely the Biden administration would consider levying the full amount, Prest said.

If it did, profitability would drop, and rigs would abandon federal lands for cheaper oil reserves on state or private lands. And the administration would lose its ability to gain those revenues, and carbon offsets, he said.

But the administration is under pressure from environmental groups to be as bold as possible. Kelly Fuller, energy and mining campaign director for the Western Watersheds Project, said conservationists plan to keep pushing Biden toward dramatic changes, even if those seem unlikely.

“The conservation community has been working very hard to get the administration moved closer towards ending leasing, ending drilling, because of the climate emergency,” she said. “We’ve not been hearing real comforting things, so we’ll see.”

So far, under the Biden administration, approvals of wells have not slowed, according to federal data (Energywire, July 13).

But Fuller also said there is extensive room for the administration to make a difference on the ground, by attaching more wildlife, air quality and water stipulations on approvals to drill. It could also adhere to federal obligations to consult tribes on energy, something tribal historic preservation officers broadly say has failed to happen.

Those smaller details matter, although they attract less attention at the national level, she said.

“If the focus [of the report] is just on improving the royalty situation, that’s not going to be enough,” Fuller said.

3. The big change not likely to be included

Although oil and gas operators are apprehensive about what is to come, many experts say the furthest-reaching possibility, a permanent freeze on new oil and gas leasing, would run afoul of federal law.

“In my reading of the [Federal Land Policy and Management Act], the Mineral Leasing Act, the acts that require use and multiple use of federal land, I do not believe he [Biden] has the legal authority to say, ‘Everything is going to stop because I’m concerned with climate change,’” said Karen Budd-Falen, a Wyoming lawyer who served in the Trump Interior Department and has pushed for local property owners to take control over land and mineral resources.

The confidence that the courts will restrain the Biden administration grew after a federal judge in Louisiana last month barred the administration from continuing its temporary federal leasing pause until the full legality of that action had been reviewed by the courts.

A federal judge in Wyoming will also soon weigh in on the issue, following a lawsuit over the pause brought by the Western Energy Alliance.

Oil advocates have not been mollified by recent statements by several Biden administration officials in favor of the oil program. For example, Haaland told lawmakers on Capitol Hill last month that oil and gas “will continue well into the future” on public lands.

Instead, the industry expects the administration to depress activity in less obvious ways. And experts are leaning into this theory, as well.

Aside from the leasing freeze, the Biden administration doesn’t appear to be pressuring its boots on the ground to slow drilling. Quite the opposite: Drilling permits on existing leases are being approved at a rate that could outpace the Trump era.

The drilling activity also highlights how entrenched the federal oil and gas program really is, something some observers say needs to be deeply considered.

Shawn Regan, vice president of research at the Property and Environment Research Center in Montana, noted that any policy moves that cut into oil and gas leasing and royalty incomes will shave the dollars available for conservation, one of the Biden administration’s chief priorities.

Laws like the immensely popular Great American Outdoors Act, which passed last year, building on the Land and Water Conservation Fund Act, have tied conservation funding to federal oil and gas incomes. How to decouple those hasn’t been addressed, Regan argued.

“That may not be the best approach,” he said of reliance on oil revenues. “But we can’t deny that that is what we have. If we are going to do something different, we need to say what that is.”

Correction: An earlier version of this story misstated the mission of Resources for the Future.