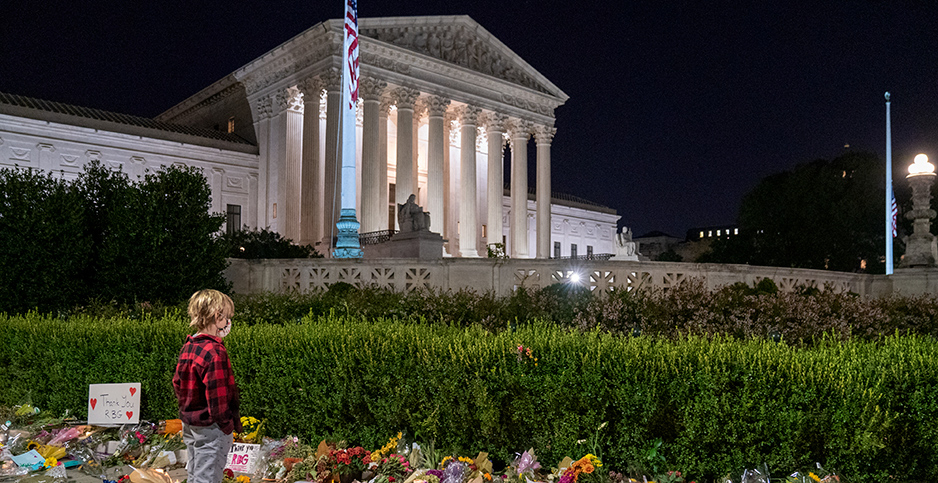 Miles Flynn, 10, views the thousands of flowers and trinkets left near the steps of the Supreme Court as mourners pay their respects to former Supreme Court Justice Ruth Bader Ginsburg. President Trump plans to name a replacement Saturday. Ken Cedeno/UPI/Newscom

An opponent of the social cost of carbon. A former Michigan judge backed by industry and conservative activists. And a Florida jurist who refused to acknowledge climate science.

They have risen to the top of President Trump’s short list for the Supreme Court.

Trump’s pick to replace the late Justice Ruth Bader Ginsburg could help decide how far the court moves to the right on energy policy, administrative law and other climate issues, as the bench becomes more conservative potentially for decades to come.

Several of the finalists, drawn from lists of potential Supreme Court justices that Trump has released over the years, could also help bolster the president’s reelection bid in certain swing states.

The women on Trump’s short list for the lifetime appointment all hew toward the originalist, textualist postures of Justice Clarence Thomas and the late Justice Antonin Scalia, whom several of the potential nominees clerked for early in their careers.

While all have conservative reputations, their backgrounds and records point to distinctions, if not fundamental differences, among the likely finalists. Some have opposed aggressive climate action, while others have been silent on the subject.

Barrett had a long meeting with the president at the White House on Monday and has emerged as the clear front-runner in recent days, according to media reports.

A former Scalia clerk and Notre Dame Law School professor, Barrett was reportedly a runner-up for the high court vacancy filled by Justice Brett Kavanaugh. Barrett’s potential appeal in the Midwest — home to many of this year’s most important swing states — could help the devout Catholic win the nod this go-round.

During her 2017 confirmation hearing for the 7th Circuit, Democratic senators raised questions about how faith influences her interpretation of the law.

They pointed to a 2006 Notre Dame commencement address in which she told graduates to keep in mind that the purpose of their legal careers should be "building the kingdom of God."

Barrett promised that "my personal church affiliation or my religious belief would not bear on the discharge of my duties as a judge."

Under Pope Francis, the Catholic Church has urged its followers to take action on climate change (Climatewire, May 22).

If Barrett is nominated and confirmed, six of the high court’s nine members would be observant Catholics.

Legal experts say Barrett’s academic writings indicate that she might favor a limited role for agencies like EPA in regulating emissions of carbon dioxide and other greenhouse gases that contribute to climate change (Greenwire, Sept. 19).

During Barrett’s brief time in private practice, she was part of the team that represented President George W. Bush in Bush v. Gore (E&E Daily, Sept. 7, 2017).

Originally from New Orleans, Barrett has family ties to the oil industry.

Her father was an attorney for Shell Oil Co., and Jesse Barrett, her husband, has "advised a petroleum producer in a regulatory proceeding concerning allocation of proceeds from the Alaskan oil pipeline," according to SouthBank Legal, the law firm where he works. Jesse Barrett was also a former federal prosecutor.

The Barretts have five biological children and two adopted children from Haiti, a country Trump reportedly referred to as a "shithole."

A Cuban-American from the perennial swing state of Florida, Lagoa is reportedly Trump’s second-favorite finalist.

But that could change before Saturday, when the president has said he’ll announce his nomination. Trump is reportedly planning to meet with Lagoa in Miami on Friday.

Lagoa, who will turn 53 before Election Day, has served as a Sunshine State judge since 2006. In January 2019, Republican Gov. Ron DeSantis, a staunch Trump ally, appointed Lagoa to the state Supreme Court.

On the state high court, she expressed skepticism about a ballot initiative that sought to dismantle Florida’s regulated electricity market (Energywire, Sept. 3, 2019).

Before Lagoa and her colleagues reached a ruling, however, she was nominated and confirmed to join the federal judiciary (E&E Daily, Dec. 2, 2019).

During the brief vetting process, Lagoa punted on questions about human-caused climate change and the limits of presidential powers.

"Do you believe that human activity is contributing to or causing climate change?" Sen. Dianne Feinstein (D-Calif.) asked the nominee in written questions for the hearing record.

"As a sitting justice on the Florida Supreme Court and a judicial nominee, it would be inappropriate for me to state my views on this issue as it might be the subject of pending or future litigation," Lagoa responded.

She offered similar answers to questions about how courts should respond if Trump refuses to comply with a court order or seeks to pardon himself.

A Catholic, Lagoa is married to Jones Day lawyer Paul Huck Jr., and is a mother of three.

Trump said his list of possible nominees includes "a great one from Michigan" — and in Larsen, Trump might find more than just a jurist.

Unlike most high court nominees, Larsen has experience campaigning for statewide office in a presidential battleground state. Michigan features a competitive Senate race, too.

Larsen has presidential campaign experience — though not for Trump. She volunteered for Democratic nominee Joe Biden during his 1987 presidential run. She did "low-level" work that included phone calls and stuffed envelopes for him in Iowa, she wrote in paperwork for her appellate court nomination.

A former Scalia clerk, Larsen worked in the George W. Bush administration’s Office of Legal Counsel. She was also special counsel to the dean and a lecturer at the University of Michigan Law School.

Former Gov. Rick Snyder (R) nominated her in 2015 to the Michigan Supreme Court, and she was reelected to the seat in 2016 with nearly 59% of the vote.

Her other donors included Richard, Dan and Suzanne Cheryl DeVos, members of the billionaire family of Education Secretary Betsy DeVos. She also got donations from Lee Liberman Otis, a founding director of the Federalist Society, as well as then-President of the Business Roundtable John Engler, a former Republican Michigan governor.

Larsen said she promised nothing during that campaign except to work hard.

"I think once judges start running on results, I don’t know what the point is. Like, just elect the legislature to decide everything," she said during a 2018 appearance at Duke University.

At a different 2018 event, she said there was no perfect way to pick judges, but the process should be fair — comments that Senate Democrats might now use against her as they gear up for a battle against their Republican colleagues who have said they would act to swiftly confirm a Trump pick for the court.

The same GOP lawmakers said they would wait for the outcome of the election instead of considering President Obama’s selection of U.S. Court of Appeals for the District of Columbia Circuit Judge Merrick Garland for the Supreme Court seat that opened when Scalia died in February 2016. Trump took office in January 2017 and tapped Justice Neil Gorsuch for the post.

"There must be some form of democratic input in the process of selecting our least majoritarian branch of government," Larsen said in a speech at Case Western Reserve University. "There is no perfect solution to the problem of selecting who will sit in judgment of our laws, our leaders and ourselves. We can only ask that the process be transparent, and the process be fair."

When Trump nominated her to the federal bench in 2017, the conservative Judicial Crisis Network ran an ad pressuring Democratic Michigan Sens. Debbie Stabenow and Gary Peters not to block her nomination.

Larsen told the Senate Judiciary Committee she didn’t know why the group was supporting her. Both her home-state senators ended up voting for her confirmation.

Larsen often has spoken of the differences between state and federal courts. In one speech, she used the example of Chevron doctrine, the legal principle that gives federal agencies leeway to interpret ambiguous statutes as they see fit.

Agencies get no such deference in Michigan, Larsen said.

"As a result, Michigan courts are untethered from an agency’s interpretation of a statute," she said in a 2018 speech at Case Western. The Ohio Supreme Court had been considering a similar stance, she added.

"Again, the point is not to praise or condemn Chevron deference. Instead, my point here is that there are all sorts of ways in which state courts can accept, reject or tinker with federal doctrines," she said.

That viewpoint has encouraged conservatives.

"At least a Justice Larsen would know what a post-Chevron world could look like," the conservative New Civil Liberties Alliance said in 2018, when she was also under consideration for the U.S. Supreme Court.

In 2019, Larsen authored a 2-1 opinion dismissing for lack of standing a petition to review air pollution permits for a gas pipeline’s compressor stations. The dissenting judge called Larsen’s opinion "inconsistent with the review procedure Congress created and my view of public safety."

Earlier this year, Larsen also ruled in favor of a pipeline company, finding in a 2-1 decision that Enbridge Inc. did not need to conduct more environmental analysis for its Line 5 cleanup plan (Energywire, June 8).

Todd is a deputy assistant to the president and deputy counsel in the White House — one of Trump’s potential Supreme Court picks who has no experience as a judge.

A former Thomas clerk, she previously served as the senior vice president and chief counsel at the U.S. Chamber of Commerce’s Litigation Center.

In 2015, while working for the Chamber, Todd filed an amicus brief in the 5th U.S. Circuit Court of Appeals arguing against Energy Department regulations based on the social cost of carbon.

She said that metric was developed "behind closed doors" and away from peer review or public comment, leading to "highly speculative" and inflated damage estimates from climate change.

"These foundational flaws render the [social cost of carbon] estimates unsuitable for use in any regulatory proceeding," her filing said.

DOE eventually settled the case, which centered on walk-in refrigerator and freezer regulations.

In the George W. Bush administration, Todd worked in the White House as associate counsel. Under Trump, she has handled judicial nominations.

Her father-in-law, William Todd, worked as a financial manager for Exxon Mobil Corp., according to her New York Times wedding announcement.

During her nomination, Democrats asked her about the role of science in judicial analysis. Rushing responded that it "depends on the nature" of the case.

In written questions, Sen. Sheldon Whitehouse (D-R.I.) asked: "As a judge, would your personal views prevent you from objectively evaluating scientific evidence that demonstrates that there is overwhelming consensus that human activity is a contributing factor to climate change?"

She also was asked about Trump’s statements that millions of people voted illegally in the 2016 election, and that immigrants "must immediately, with no Judges or Court Cases," deport them.

She was a volunteer legal adviser for Mitt Romney’s presidential campaign. In 2009, she volunteered and raised money for Sam Arora, a former Democratic member of the Maryland House of Delegates.