What Trump’s order means for CRA, litigation on BLM rule 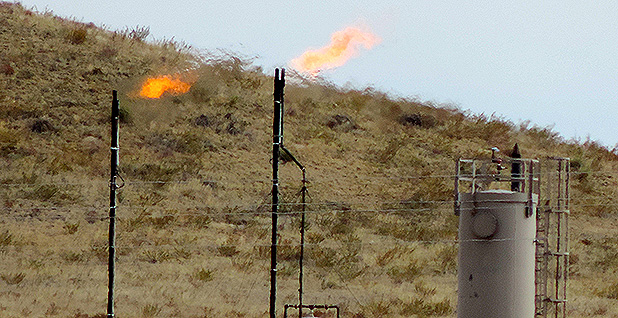 What's next for the Obama administration's rule to limit methane emissions? Photo by WildEarth Guardians, courtesy of Flickr.

As the CRA resolution stalled in the Senate, ACCF this month launched a campaign to strike from the books BLM’s regulation curbing natural gas venting, flaring and leakage from production sites on public lands. If the upper chamber were to vote in support of the CRA resolution, the Methane and Waste Prevention Rule would quickly disappear, along with any possibility that BLM would reintroduce a substantially similar regulation.

Trump’s direction to the Interior Department to suspend, revise or rescind four rules, including the methane rule, is a much lengthier process, ACCF said.

"Unraveling the methane rule at the agency level would require months of staff work and would undoubtedly face vigorous legal challenges from environmental groups, which could delay its repeal for up to two years," ACCF wrote in a statement yesterday. "On the other hand, Senate passage of a disapproval resolution under the CRA — something the House has already accomplished — would be quick and efficient, saving the agency both time and resources."

In a legal sense, rescinding a rule under the CRA is a far cleaner process, said Mark Barron, a partner at the law firm BakerHostetler.

The order did little to move the needle, particularly with respect to the methane rule’s future, Barron said.

"It was already widely known that the Trump Administration did not support the venting and flaring rule and I think most folks anticipated that, if the CRA did not pass, BLM would move to rescind the rule through the regulatory process," he wrote in an email to E&E News. "The debate since the election has never been whether the rule would be discarded, but whether it would be discarded quickly and easily in Congress or through the time consuming and expensive process of administrative rulemaking (and subsequent litigation). The Executive Order doesn’t do anything to change that analysis."

A revised rule could keep the elements of the regulation that strengthen BLM’s royalty collection process, said Ryan Alexander, president of Taxpayers for Common Sense.

"That’s much more productive than CRA," she said.

Environmental lawyers saw a silver lining in the White House’s direction. Groups that opposed CRA repeal have asked BLM to tweak the rule, rather than allowing Congress to eliminate it.

"The fact that this executive order shows that President Trump himself wants the Bureau of Land Management to use a scalpel to change the methane waste prevention rule is yet another sign that the oil and gas lobbyists who are asking Congress to use a sledgehammer to get rid of the rule using the Congressional Review Act are just too extreme," said Joel Minor, an Earthjustice attorney representing environmental intervenors in litigation over the methane rule.

The regulation went through years of comment and technical review and is therefore deserving of a more thorough examination before it is killed, said Erik Schlenker-Goodrich, executive director of the Western Environmental Law Center.

"The current administration might not like it, but it does have the authority to go through a new rulemaking process," he said.

A window of opportunity to pass the CRA resolution through the Senate could open up after the chamber votes on Supreme Court justice nominee Neil Gorsuch, ACCF said.

The Senate has until the week of May 8 to nullify the rule with a simple majority vote, the group said.

This week’s executive order creates a wave of uncertainty for litigation over the methane rule.

Industry groups and states challenged the regulation immediately after BLM finalized it last year. The U.S. District Court for the District of Wyoming declined their request to freeze the rule, and it took effect in January, gradually phasing in compliance requirements.

Environmental defenders of the rule are now monitoring the court docket to see if the Justice Department seeks to pause the case. DOJ lawyers have already asked courts to pause proceedings in litigation over U.S. EPA’s Clean Power Plan and BLM’s hydraulic fracturing rule, which were also targeted by the executive order. As in those cases, environmental lawyers have vowed to oppose any attempt to halt the methane litigation.

"We don’t see any reason to put the litigation on hold until there is a firm and final decision revoking the rule from the Bureau of Land Management, and that will require notice-and-comment rulemaking, and that’s a process that is likely to take far longer than resolving the litigation in court," Minor said.

Earthjustice and other environmental groups will argue that the issues in the litigation must be resolved to inform Interior’s reconsideration of the rule, as challengers contend that the methane rule is essentially an air quality regulation that falls on EPA’s and states’ turf. Minor noted that BLM "at least in theory needs to know what it has legal authority to do before it takes action."

Tompkins, the former Interior solicitor, said it’s "a big question mark" whether the district court would agree with environmental groups and allow litigation to move forward in either the methane case or the fracking case.

"I think the court will want to know: Is this an issue that could likely be capable of repetition and recur?" she said. "Or are we truly mooting out all the issues in these cases? It’s really going to depend on the vantage point of those judges."

Another wrinkle from Trump’s executive order is its erasure of the Obama administration’s metric for weighing the "social cost" of greenhouse gases. The social cost of methane was incorporated into the cost-benefit analysis for the methane rule and faced deep skepticism from the federal judge handling the case (Energywire, Jan. 17).

Minor said the new administration’s rejection of the metric should not affect legal arguments surrounding the rule.

Legal briefs in the case are due in April and May.

And as Interior moves forward with a rulemaking process to reconsider the rule, supporters of increased regulation are also preparing for new opportunities to hold the agency accountable along the way and challenge a final decision if needed. Minor noted that any attempt to weaken the Obama administration’s effort to prevent methane waste "could well be grounds for litigation over that choice."

"They are going to have to provide a robust rebuttal of all the vast administrative record that exists for [the methane and fracking rules]," Tompkins said. "There was extensive public comment, analysis and research, and if the new administration is going to rescind or significantly change those Interior regulations and policies, they’re going to have to provide a counterpoint to why and address all those issues in the records that support the prior administration’s actions."