What Trump’s permit order means for NEPA, energy and race 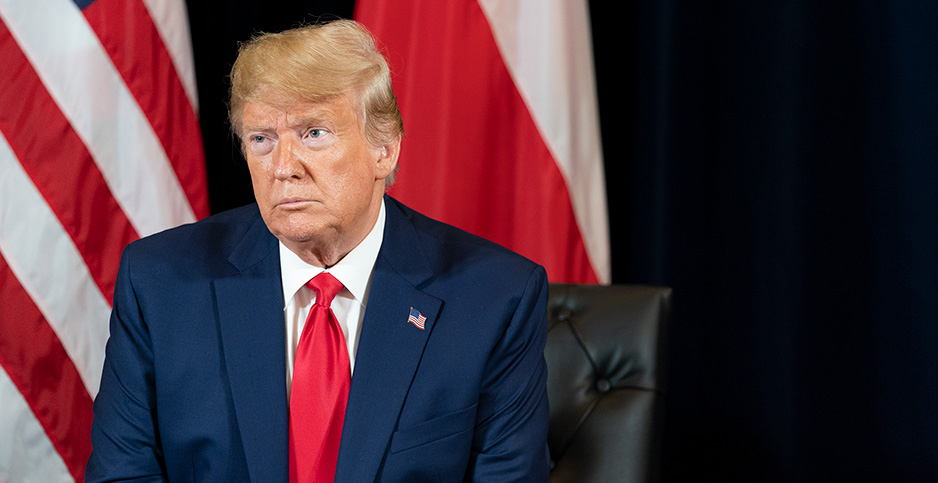 Amid a public health crisis that has crashed the economy, President Trump yesterday ordered his administration to accelerate permitting for major projects — sparking blowback from critics who say it will inflict damage on communities of color he’s accused of ignoring as thousands protest across the country against police brutality and injustice.

While Trump had hoped to run for reelection on a booming economy, COVID-19, which has disproportionately affected African-Americans in the United States, has upended that plan. In recent weeks, the president has taken steps to waive regulations across sectors, including energy.

"The need for continued progress in this streamlining effort is all the more acute now, due to the ongoing economic crisis," Trump said in the executive order. "Unnecessary regulatory delays will deny our citizens opportunities for jobs and economic security, keeping millions of Americans out of work and hindering our economic recovery from the national emergency."

Industry sources privately doubted that this latest action would provide the kind of regulatory relief he is looking for, however. Critics also saw the effort as a giveaway to the oil, gas and extractive industry that has backed Trump. The move comes as Trump has faced growing criticism for his handling of a pandemic that has killed more than 105,000 Americans, as well as his response to nationwide protests sparked by the killing of George Floyd, who died after a Minneapolis police officer pressed his knee against his throat for nearly nine minutes.

"It’s clear that while we are suffering, and he wants to say that he is thinking about Americans, it’s clear his goal is to help industry at our detriment," said Kerene Tayloe, director of federal legislative affairs at WE ACT for Environmental Justice.

"It is just repeated attempts by this administration to whittle down any environmental protections. At the end of the day, it is going to harm communities," Tayloe added.

Specifically, yesterday’s order would direct agency chiefs to take "appropriate steps to use their lawful emergency authorities" and take "all reasonable measures to speed infrastructure investments." It also directs Transportation Secretary Elaine Chao to speed up the construction of highways and other projects and, in 30 days, submit a report on her progress. The order directs the Interior, Defense and Agriculture departments to do the same.

NEPA forces the government to give notice to communities when major projects like pipelines or highways are planned for their neighborhoods. It also allows communities to challenge projects, sometimes leading to alternative options for projects with mitigated impacts.

That was true with projects such as the Atlantic Coast pipeline, a Dominion Energy-proposed gas pipeline slated to border the historically African American Union Hill community west of Richmond, Va., Tayloe noted. A federal judge recently found that the environmental review for the project did not fully consider environmental justice impacts as required under federal law.

Other groups, such as the Center for American Progress, have noted that before NEPA was enacted in 1970, infrastructure dollars were spent bulldozing communities, particularly black communities like the Rondo neighborhood of St. Paul, Minn., which had no say in the matter (Greenwire, March 12).

Industry, however, has long complained about the bureaucracy of page limits and timelines associated with NEPA review and publicly hailed the measure, saying it would help jump-start the economy.

"The president is putting the economy first; he’s putting America’s workers first," said Dan Eberhart, CEO of Colorado-based Canary LLC, one of the largest private oil field service companies in the nation, and a Republican donor.

"If we want to rebuild America, clearing away the unnecessary regulatory hurdles that can add years to infrastructure projects that are in the public interest is a smart move — and more efficient than new stimulus dollars," Eberhart said.

The move also comes amid troubling signs for Trump’s campaign in a number of critical battleground states, including energy-rich Pennsylvania. A Fox News poll released Wednesday had Trump trailing Democratic rival Joe Biden by 8 percentage points in the state, with 50% of registered voters saying they planned to vote for the former vice president compared with 42% for Trump.

Just as worrisome for Trump, a separate poll showed Biden closing the gap with Trump in Texas, with the president receiving support from 44% of respondents and Biden receiving 43% in a general election matchup. Trump won Texas by 9 percentage points in 2016.

"Too tight to tell in Texas," said Quinnipiac polling analyst Tim Malloy. "As the country confronts chaos and COVID-19, perhaps one of the most important states of all is a toss-up."

Texas hasn’t voted Democratic in a presidential race since 1976, when Jimmy Carter won the White House.

Trump is expected to resume in-person campaigning next week with a fundraiser at a private home in Dallas.

His campaign has already signaled that it will look to tout Trump’s efforts to shore up the oil and gas industry, pointing to Trump’s role in securing an April agreement between Russia and Saudi Arabia to cut oil production and charging that Biden’s support for climate change initiatives would cost jobs.

While the executive order works as a messaging tool to rally Trump’s base, it could also be significant, stifling public input and transparency, said Nada Culver, vice president of public lands and senior policy counsel at the National Audobon Society. Plus, it’s unclear how long Trump’s national emergency declaration will stay in place.

"If it’s an emergency forever, then we have no environmental review forever," she said. "When those things go out the window, it would be public risk."

Offshore wind and a ‘relief valve’

Given its ambiguity, many unknowns remain about the order. There are a host of offshore wind projects currently making it through permitting and environmental review, for example, but it’s unclear if the executive order would push those across the finish line.

Erik Milito, executive director of the National Ocean Industries Association, praised the opportunity to boost American workers and industries via "smart and tailored" reform but asked for direct funding for the Bureau of Ocean Energy Management’s renewable program to make that a reality.

BOEM had requested a $25 million bump earlier this year for its renewable budget to accommodate a slew of offshore wind projects in the pipeline.

The closest U.S. project to construction and operation, Vineyard Wind’s 84-turbine proposal off the coast of Martha’s Vineyard, Mass., is expected to clear federal permitting this year and could be affected by the order. It was stalled last summer when BOEM decided to execute a broader analysis of how the offshore wind industry could affect other ocean users, like fishermen.

Vineyards’ final environmental review is scheduled for completion by December, a year and a half after its original expected publication in 2019.

The delay has depressed confidence that the Trump administration supports the offshore wind industry today. Interior has gone through two distinct periods on offshore wind during the Trump era, first under the pro-offshore leadership of Secretary Ryan Zinke, followed by the less enthusiastic guidance of Secretary David Bernhardt, whose silence on the sector has not gone unnoticed.

BOEM directed a request for comment on the order to Interior, which touted its "all of the above" approach to combat the coronavirus. A spokesman said the supplemental review to look at offshore wind’s cumulative impact would be completed by this month.

For others, the order is a late-term acceleration of the Trump administration’s existing policy approach that prunes or eliminates environmental regulations, oversight and public input that would hamper industry.

The impact really depends on how the executive order is applied, said Susan-Jane Brown, an attorney with the Western Environmental Law Center.

There is a "relief valve" in NEPA that allows for expediting. But it doesn’t waive environmental review obligations, it delays them, she said.

"Simply saying we’ve got an economic emergency on our hands and therefore go build large infrastructure projects — it just doesn’t work that way in the real world," she said.