What we learned from the Big Oil hearing 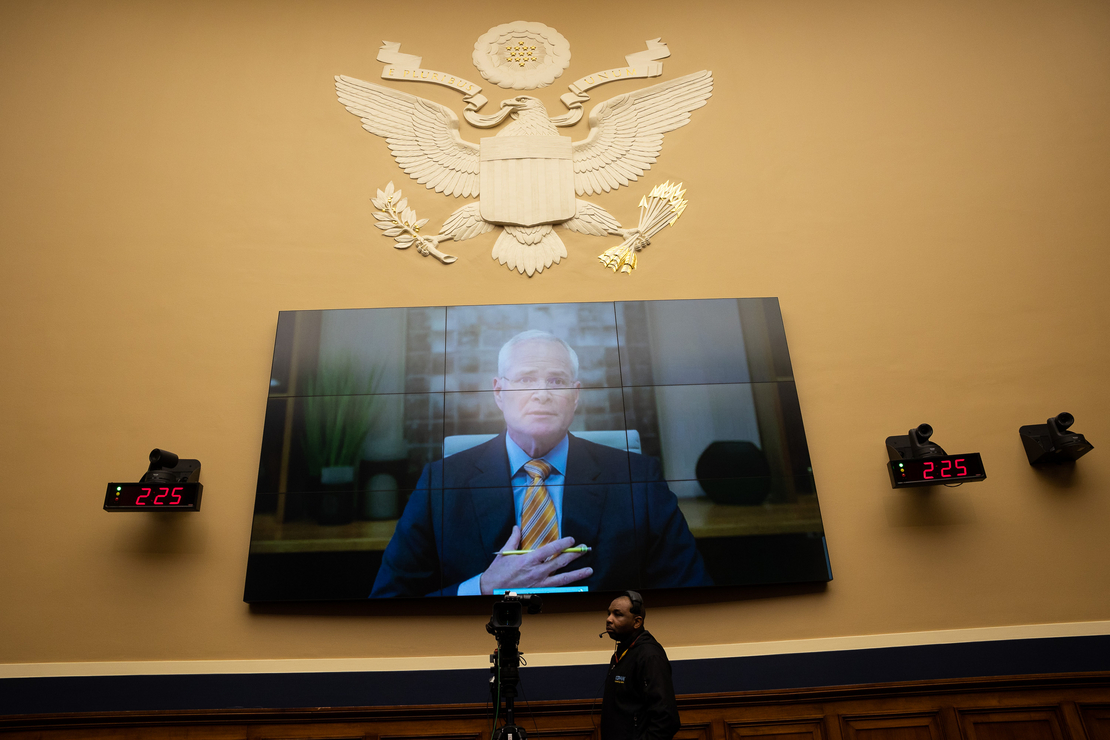 The House Energy and Commerce Committee yesterday held the most anticipated of several planned hearings on the energy policy fight precipitated by Russia’s invasion of Ukraine.

Democrats, looking to deflect blame for high gasoline prices as the midterms approach, launched an all-out campaign against the oil industry for alleged price gouging. Republicans defended the industry, delighting in Democratic calls to boost oil and gas production after they campaigned in 2020 on climate policy.

The six-hour hearing in the Oversight and Investigations Subcommittee offered a distillation of virtually every energy talking point lawmakers have lobbed at each other over the past month and a half. An array of lawmakers chimed in, as the subcommittee allowed other members of E&C to join the hearing, dragging the questioning late into the afternoon.

It was also a high-profile platform for Democrats to make their case against the industry, with testimony from top executives at Exxon Mobil Corp., Chevron Corp., BP America Inc., Shell USA Inc., Devon Energy Corp. and Pioneer Natural Resources Co.

The companies denied gouging consumers, but Democrats pointed to high 2021 profits — more than $75 billion among the six — and stock buybacks as evidence of wrongdoing.

“The way you talk about your business, it’s as if you have no control over anything and that you’re just helpless participants in the global market,” said Rep. Debbie Dingell (D-Mich.). “But I’m not sure that’s true.”

It’s not clear whether the proceedings will have much of a policy impact, with both sides dug in and Congress wielding little ability to influence global crude oil prices.

But it did offer some political insights, particularly for Democrats, who are still trying to pass some version of their massive climate and social spending bill through the 50-50 Senate.

While climate change was not the topic of the hearing, it was notably absent from the questioning on the Democratic side of the dais, and it could portend a larger rhetorical shift as they enter the midterm season with high gas prices and inflation a major focus for voters.

Here are four takeaways and some notable moments from the marathon hearing with Big Oil CEOs:

Democrats have now put themselves in the unusual position of demanding oil companies aid the clean energy transition while simultaneously asking them to increase near-term oil and gas production.

Just a few months ago, many of the executives who appeared yesterday — from Chevron, BP, Exxon and Shell — were also at a House Oversight and Reform Committee for a hearing on climate misinformation. At the time, Democrats on that panel urged them to reduce production and ultimately make good on their pledges to hit net-zero emissions by 2050.

Yesterday, Democrats pondered why the companies do not increase oil and gas production more rapidly to make up for shortfalls caused by the embargo of Russian energy imports.

Despite the latest dire warning from the United Nations Intergovernmental Panel on Climate Change this week, their focus was primarily on oil markets — not emissions or clean energy. Indeed, the first person to discuss greenhouse gas emissions at length during the hearing was BP America President David Lawler.

Democrats insist the two goals are not necessarily at odds, particularly given that cleaner energy and electric vehicles would make the United States less dependent on foreign oil cartels. They also remain resistant to federal policy that would make it easier to drill and are still eager to repeal special tax breaks for the industry.

“We need a long-term energy policy that moves toward clean energy, that will keep us independent from foreign oil, and that’s what we need to do,” said Subcommittee Chair Diana DeGette (D-Colo.). “But you know something? When my constituents went to get gas in their cars today, they paid $3.95 a gallon. And nationally, they’re paying $4.16 a gallon.”

But it’s a dynamic Republicans are eager to capitalize on.

Senate Republicans have been hopping into the attack, as well.

“The kangaroo court that’s playing out in the House is particularly amusing,” Sen. Ted Cruz (R-Texas) said during a news conference yesterday. “Especially when every single nominee from the Biden administration has laid out their objective to starve the energy industry of capital.”

Is this an investigation?

For now, Democrats’ price gouging allegations amount to a pressure campaign, rather than a corporate malfeasance investigation. And it’s not clear yet if there will be more hearings or if the congressional committees will be asking oil companies to turn over documents.

In essence, they asked the companies yesterday to sacrifice financial gain for patriotic reasons by passing along profits to consumers, with most Americans and lawmakers from both sides of the aisle supporting the ban on Russian energy imports.

“I think there’s more potential for investigation,” DeGette told reporters after the hearing. “I would hope that these executives got the message today that they really need to meet with their boards and their shareholders to talk about what they’re doing.”

Still, Democrats at times were able to outline in simple terms how the industry profits from high prices and the current geopolitical situation.

Under questioning from Dingell, the executives said their break-even point is between $30 and $50 per barrel, meaning they’re taking in at least double what they would need to account for costs on each barrel.

The U.S. benchmark West Texas Intermediate was at $97 per barrel last night, while Brent crude was going for roughly $101.

Republicans and the companies, meanwhile, pointed out that many of their biggest shareholders are retirees and institutions that reap the benefits from dividends.

In reality, there’s not much Congress can do to immediately lower oil prices.

As the executives and lawmakers from both sides noted during the hearing, prices are set in a global market. While the United States is currently the world’s largest oil and gas producer, its production is spread out over thousands of private companies that individually have little sway on the price — unlike state-owned giants such as Saudi Arabian Oil Co.. Major oil companies also typically do not own significant numbers of retail gasoline stations.

Pioneer CEO Scott Sheffield told the panel that given the industry’s current challenges securing capital and with the supply chain, “it would take 18 to 24 months to add any meaningful incremental production.”

Oil executives pointed to that market complexity as they avoided answering questions directly about their business practices and how future oil prices would be impacted in various federal policy scenarios.

“Can’t you bring more clarity to this than just saying that everything is so complex?” Rep. Anna Eshoo (D-Calif.) said, summing up Democratic frustrations with how the oil companies had responded. “I know that this is not pleasant, but the American people are really not with you. They’re angry.”

Rep. Donald McEachin (D-Va.) asked each company whether their sale price for oil would be impacted if Congress suspended the 18-cent-per-gallon federal gas tax. The companies said they would not collect the tax but did not offer a clear answer on how it would impact prices, and to McEachin, that was the point.

“What I’m trying to do is disabuse the American public of this myth that if we do something like declare a federal tax holiday, that the price of gasoline will go down,” McEachin said. “We don’t know what’s going to happen.”

Still, the hearing and other efforts underway around Capitol Hill could bear some legislative fruit in the coming weeks.

McEachin suggested simply giving Americans a dividend to pay for gas. Other Democrats on the panel batted around recent proposals to tax oil companies’ windfall profits and eliminate special tax breaks for fossil fuels. That’s an idea the Biden administration proposed in its budget last month, which argued nixing the tax breaks could bring in $43.6 billion over 10 years (Greenwire, March 28).

A few Republicans used the hearing to introduce a new front in the culture war against the Green New Deal.

In short, they accused the companies of pandering to the left in advertising that touts their investments in clean energy, mirroring points about corporate America conservatives have talked up on a variety of social and cultural issues.

Rep. Bill Johnson (R-Ohio) said oil companies should be proud of domestic oil and gas production and the jobs it creates.

“We’ve all seen the TV commercials from Big Oil filled with solar panels, green climate messaging about how you’re diversifying your portfolio and how you’re embracing liberal progressive values. What’s been your return on investment with that effort?” Johnson said.

“You’ve taken a shellacking today from the Democrats,” he said. “Do they seem impressed by your efforts to show your allegiance to their anti-fossil-fuel agenda?”

Crenshaw similarly questioned why the companies would behave like they “have Stockholm syndrome” by playing ball with Democrats and environmental groups.

“They will never like you,” Crenshaw said. “Please stand up for your work, your employees and your consumers. Speak the truth. Don’t pander to what they want on the left.”

This story also appears in Climatewire and Energwire.