What will become of Trump’s statue garden? 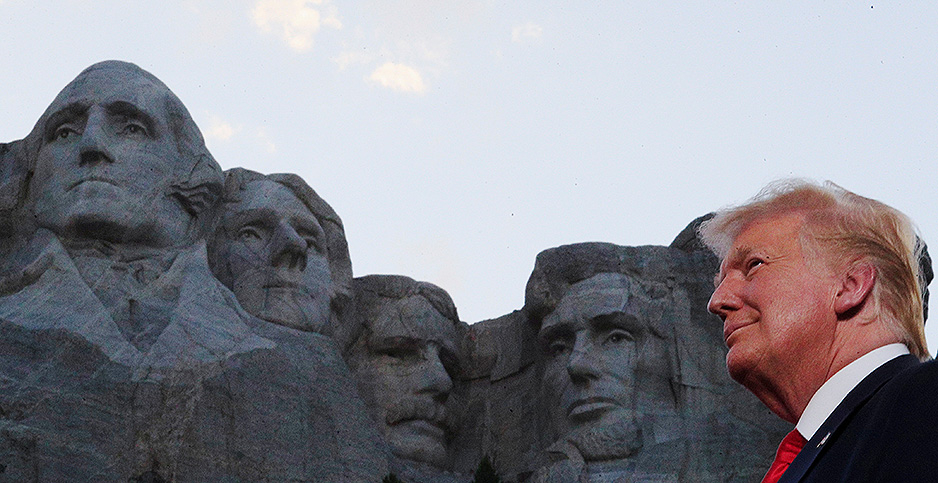 At Mount Rushmore this summer, President Trump announced his plan to create a "National Garden of American Heroes," which appears to be ending with the close of his administration. Tom Brenner/Reuters/Newscom

With time running short on President Trump, Colin Byrd figures there’s no way the proposed "National Garden of American Heroes" will ever be built at the National Park Service’s Greenbelt Park in central Maryland.

"It was a bad idea," said Byrd, a Democrat who has been Greenbelt’s mayor since 2019. "It was a bad plan and thankfully we as Greenbelters — the city of Greenbelt and more broadly the American people — have soundly rejected not only that plan, but the maker of that plan, so that’s where we are."

Greenbelt Park, located roughly 10 miles northeast of Washington, emerged as a possible site after the president first pitched the idea on July 3 during a visit to Mount Rushmore National Memorial in South Dakota. Trump vowed to fill the garden with statues of 31 of his favorite heroes, including six presidents, and to get it opened by 2026 (Greenwire, Sept. 30, 2020).

Trump’s pledge to memorialize figures the White House called "historically significant Americans" came as people across the country debated whether to take down statues in honor of Confederates who fought to uphold slavery in a secessionist movement. While Trump made the preservation of Confederate and other historical statues a key issue in his failed 2020 reelection campaign, his pet project appears to have quietly faded away.

"It seems dead in its tracks," said Adam Sarvana, communications director for Democrats who control the House Natural Resources Committee. "We haven’t heard anything about it in months, pro, con or otherwise."

Byrd said talk about the project evaporated as last year’s campaign heated up in the fall: "I believe their priority shifted to trying to suppress votes and undermine the democratic process, so this became less of a priority."

While the Trump administration insists the proposal is still alive, President-elect Joe Biden’s nominee to lead the Interior Department — Democratic Rep. Deb Haaland of New Mexico — has made it clear she wants nothing to do with the idea.

In a scathing letter in August, Haaland and fellow Democratic Rep. Raúl Grijalva of Arizona, the chairman of the House Natural Resources Committee, told Trump that Congress "will not spend public money to help you tell a fairy tale," criticizing him for not including any Native Americans or Latino Americans in his list of people worthy of commemoration (E&E News PM, Aug. 5, 2020).

"While it was a welcome surprise to see no Confederate generals on your proposed list of American heroes, Congress will not pay for any monument to your personal, very limited conception of who counts as an important American," Haaland and Grijalva said in their letter.

Even as Biden prepares for his inauguration on Jan. 20, spokespeople for the Interior Department said the project has continued to advance since Trump’s loss on Nov. 3.

"I don’t have anything new for you at this time but can confirm the project is moving forward," Interior press secretary Ben Goldey said an in email to E&E News last month, shortly before he accepted a position as communications director for newly elected Rep. Lauren Boebert (R-Colo.).

Nicholas Goodwin, another Interior spokesman, reiterated that position this week. "Ben’s statement still holds and is our statement," he said in an email.

Later, Trump added a 32nd person to his list: Caesar Rodney of Delaware, one of the 56 signers of the Declaration of Independence. Officials in Wilmington, Del., took down a statue of Rodney, who owned enslaved people, over the summer.

While neither Interior nor the White House disclosed a complete list of possible sites for the garden, Byrd said he was notified by Prince George’s County officials that the 1,176-acre Greenbelt Park was a possible location after department officials reached out to the county.

Byrd hosted a virtual town to gather feedback, discovering the project had nearly unanimous opposition. Byrd said he promised his constituents he would do whatever he could to defeat Trump’s proposal.

Interior Secretary David Bernhardt became one of the project’s biggest cheerleaders, saying in August that Trump wanted it built to honor "folks from all areas of Americana" because he "loves our country, loves our freedom and our liberty, and believes in our exceptionalism" (Greenwire, Aug. 6, 2020).

In their letter to the president, Haaland and Grijalva said Trump first misfired by announcing the project at Mount Rushmore "as a backdrop for an open appeal to white grievance politics" without making mention of the shortcomings of the men whose faces are carved into the granite: Presidents Washington, Jefferson, Lincoln and Theodore Roosevelt.

"They all held beliefs and committed acts unconscionable by today’s standards: Two saw fit to own human beings, at least one saw non-white peoples as inferior, and one oversaw the largest mass execution of Native Americans in our nation’s history," they wrote. "All of this is a matter of public record and failing to acknowledge it does you and your administration no credit."