What will the eclipse mean for solar power? 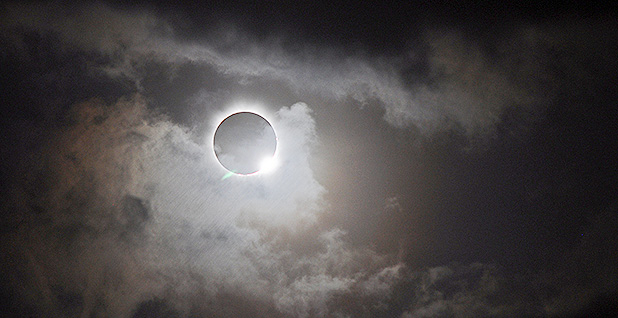 A total solar eclipse is slated to cross a narrow swath of the United States on Aug. 21. This photo shows a similar eclipse in 2012 that was visible in part of the Southern Hemisphere. Romeo Durscher/NASA/Flickr

As solar eclipse-chasers are gazing up at the sky later this month, grid operators and energy companies will be anxiously staring at their monitors as they work to compensate for a temporary loss of solar power.

The Aug. 21 eclipse slated to cross the United States from Oregon to South Carolina will cause problems for thousands of utility-scale solar power plants in the United States but is not likely to dent the reliability of the country’s power system, according to analysis from the U.S. Energy Information Administration.

The eclipse will obscure sunlight at approximately 1,900 solar plants, but only a small portion of the country’s solar capacity — 17 facilities, mostly in eastern Oregon — is in the 73-mile-wide path of totality, where the sun will be completely obscured, the EIA report says.

Solar plants outside the path of totality will be less affected, depending on how much of the sun is blocked in different regions.

EIA analyst Michelle Bowman said customers probably will not notice any changes. And that’s primarily due to the advance preparations by grid operators.

"They had to do a lot of planning ahead and have a lot of agility with backup power sources on standby," Bowman said.

Possibly the highest stakes are in California, which has 8.8 GW of utility-scale solar. The state’s grid operator has estimated that California will lose nearly half of that capacity, 4.2 GW, during the eclipse, which is expected to affect the state for nearly three hours in the morning. The state, however, is outside the path of totality.

To compensate, California is planning to use more energy from hydroelectric and natural gas plants, according to the California Independent System Operator. The operator is not anticipating any outages.

"We will ramp up generation to compensate for lost solar production, and there is plenty of capacity to meet need. It is not unusual for the ISO grid operators to manage ramps this large on certain days," CAISO wrote in a FAQ.

North Carolina is also preparing for a significant drop in solar output, from 2.5 GW to 0.2 GW, during the eclipse. But solar makes up only 3.1 percent of the state’s electricity generation. And only a small portion of the state’s mountainous southwest corner will be within the path of totality.

Duke Energy, which manages more than 75 percent of the solar power produced in North Carolina, will have natural gas ready to step in and predicts it will be able to meet customer demand, according to a blog post.

Bowman said solar generation right now contributes only a very small percentage of energy in the United States. But that’s a trend that’s changing — a May EIA report found, for example, that utility-scale solar has grown rapidly over the last five years.

"We are seeing it really take off lately," she said. "So the next time we have an eclipse, we might see a much bigger impact."