What will Zinke do with the rest of his life? 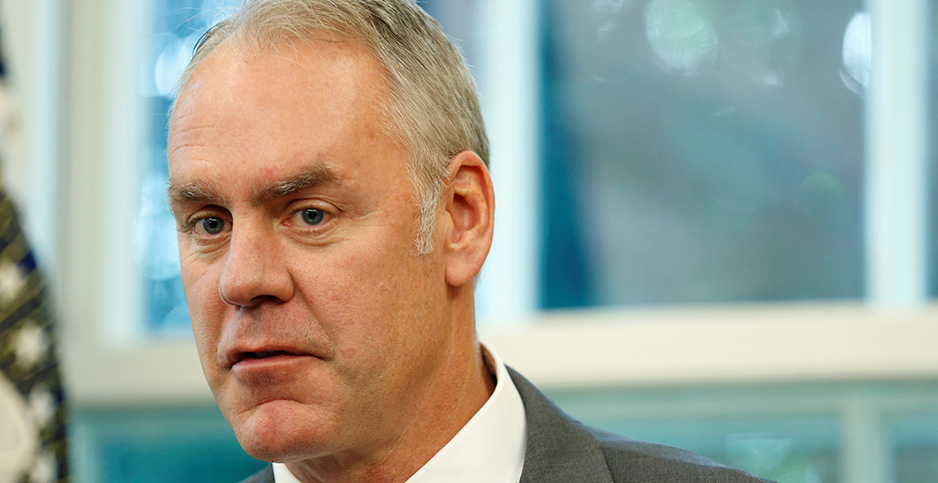 Once a rising star in Montana politics, the 57-year-old former Navy SEAL has already declared he won’t run for governor in 2020. The state’s next U.S. Senate election, also in 2020, is for a seat currently held by a fellow Republican, Sen. Steve Daines.

Returning to the House seat he left for the Interior post appears an unlikely option in the current political configuration, too, as the state’s sole congressman is a Republican, Rep. Greg Gianforte.

Other traditional next steps for former top administration officials range from leading trade associations or joining an established law-and-lobbying firm to setting up shop on one’s own or finding a seat in academia.

Former Secretary Sally Jewell, who began her career as a petroleum engineer and served as REI’s chief executive before joining the Obama administration in 2013, took time off to explore the nation’s public lands after her tenure ended.

"A fond farewell to DC; road trip begins to see great public lands and people who care for them. Follow the adventure!" Jewell tweeted at the start of a road trip in February 2017 (Climatewire, Feb. 6, 2017).

Jewell previously spent a semester at the Institute of Politics at the Harvard Kennedy School of Government and more recently returned to her alma matter, the University of Washington, to chair the advisory council of EarthLab, which seeks to find the "intersection of science and humanity" (Greenwire, Aug. 9, 2017).

She also serves as a global board member at the Nature Conservancy.

While Zinke’s hometown of Whitefish, Mont., might beckon, he and his wife, Lola, have a home in Santa Barbara, Calif., where she was raised, as well.

Early last month, as questions were heating up about his hold on the Interior job, Zinke told KBUL’s "Montana Talks" radio show host Aaron Flint that he won’t be going after the post currently held by Gov. Steve Bullock, a Democrat in his second term (E&E News PM, Nov. 9).

Bullock enjoys good favorability ratings and won re-election in 2016 by a margin of 50 percent to 46 percent, but under Montana’s term limits system, he can’t run again in 2020.

"I am not going to run for governor," Zinke told Flint. "I think there’s some great candidates out there, and I look forward to supporting them."

Should he contemplate a return to elected politics, despite the obvious impediments, Zinke might look to former Secretary Ken Salazar, who served in the Senate and as Colorado’s state attorney general before joining the Obama administration in 2009.

Salazar, a partner in the Denver office of the law firm WilmerHale, is often mentioned as a contender for statewide office in Colorado.

He opted against running in the open gubernatorial race earlier this year, however, pointing to his "family’s well-being" in an op-ed in The Denver Post.

Salazar also serves on the board of trustees for the Mayo Clinic.

Former Secretary Gale Norton, who likewise served as Colorado’s attorney general before her tenure in the George W. Bush administration, has kept her eye on what she described as "cooperative conservation" issues.

"I’ve been focused on how you can protect the environment without having too much government intrusion and government mandating control of people’s lives. I worked on that 30 years ago when I was a national fellow at the Hoover Institution, and I have been concerned about it ever since," Norton told E&E News in a 2013 interview (Greenwire, Jan. 18, 2013).

She also serves on the board of the Federalist Society and the external advisory group for the University of Colorado Renewable and Sustainable Energy Institute.

Zinke’s own congressional campaign treasury from his 2016 House race is almost depleted, limiting what otherwise might have been some options for ongoing political viability. His campaign bank account reported having $16,277 on hand as of Sept. 30.

A separate political action committee established by Zinke in 2014, the Supporting Electing American Leaders (SEAL) PAC, reported having $123,938 on hand as of Nov. 26, as well as a potentially invaluable list of willing small donors. Zinke has not been involved with the PAC since joining Interior, officials say (Greenwire, Feb. 5).

Another political action committee that Zinke founded but later left, Special Operations for America PAC, reported having $31,477 on hand as of Nov. 26.

Zinke may want to eschew the path taken by James Watt, who held the post under President Reagan.

Following his much-criticized tenure at the agency’s helm — which ended shortly after he described the members of a coal advisory panel as "a black, a woman, two Jews and a cripple" — Watt became a lobbyist focused on the Department of Housing and Urban Development.

At the time, Watt discussed his decision not to seek the state’s governorship, focusing instead on his career as a legal consultant and keynote speaker: "If you’re an effective guy, you use yourself up," he said.

Watt would later be indicted on 18 felony charges tied to work lobbying HUD for federal contracts for low-income housing projects, pleading guilty to a single misdemeanor charge in 1995 that resulted in five years of probation but no jail time.