What’s next for the Civilian Climate Corps? 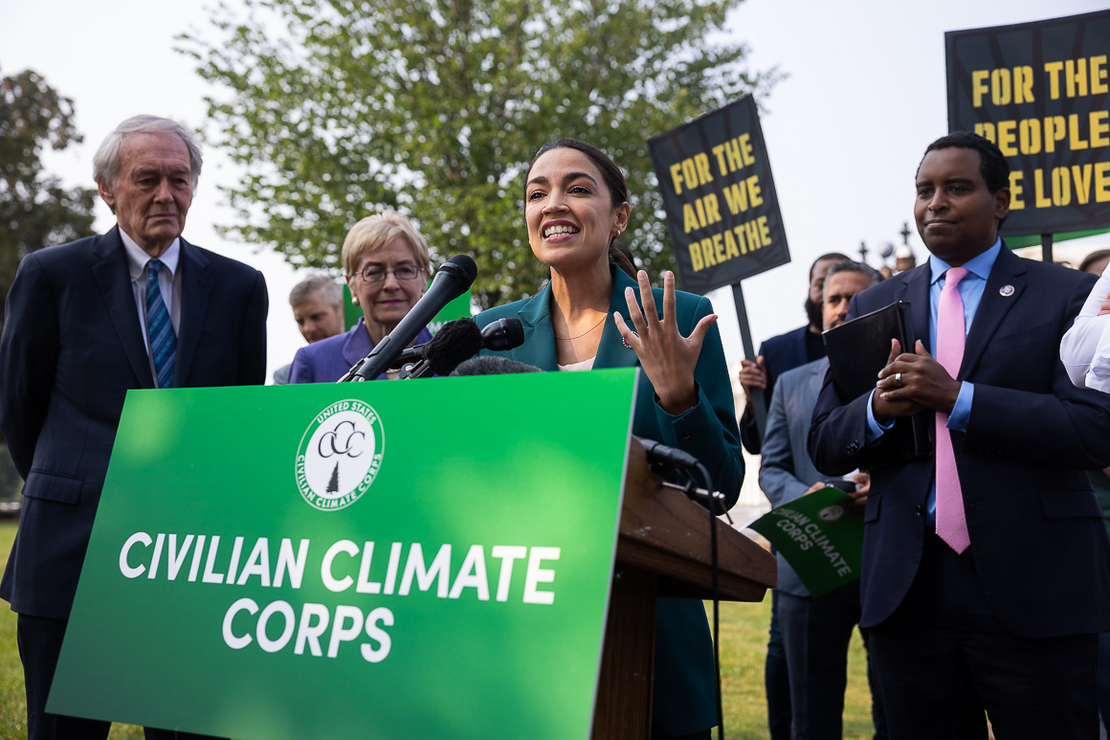 All last year, the promise of a new Civilian Climate Corps galvanized young, progressive voters, with the Democratic base energized around President Biden’s support for the initiative.

But now that the legislative vehicle for creating such a green jobs training and placement program has stalled on Capitol Hill, both the White House and congressional Democrats are under pressure to find other ways to keep the concept alive.

“The young people who came out to vote for [Biden] were driven by climate at an unprecedented rate — this is an incredibly popular program with them,” said Lena Moffitt, campaigns director for Evergreen Action. “This is a key item they are looking to Democrats, both in the White House and Congress, to be delivering on.”

With the fate of the $1.7 trillion climate and social spending package now uncertain, some top appropriators have said they will fight to keep House-passed appropriations for the Civilian Climate Corps in the annual government funding bill. The path for such an effort, however, is unclear.

Other Democratic lawmakers have talked about moving stand-alone bills on the matter, but that is likely a nonstarter in an evenly divided Senate. At the same time, advocates have argued that federal agencies have the power to birth the program in some form or another on their own.

But none of these options would come with as much money or staying power as the close to $30 billion investment once promised in the now-stuck budget reconciliation bill, also known as the “Build Back Better Act.”

The Civilian Climate Corps would be modeled after the Civilian Conservation Corps of 1930s and ‘40s, a New Deal-era undertaking that employed and trained millions of young people in jobs on public lands. Many of the roads, bridges, parks and trails still enjoyed today were constructed during that time (Greenwire, Sept. 10, 2021).

After Democrats on Capitol Hill spent years clamoring for different iterations of such a program, Biden threw his support behind the idea in 2021. The version he championed — a rebranded corps popularized by Rep. Alexandria Ocasio-Cortez (D-N.Y.) and Sen. Ed Markey (D-Mass.) — would pay participants a living wage to do work in the areas of restoration, resiliency, and wildfire risk mitigation and prevention.

This was the version included in the “Build Back Better Act.”

Democratic leaders continue to insist the bill can come back from the dead.

And environmental activists, including Moffitt, say their primary focus right now is not on contingency plans for saving individual priorities like the Civilian Climate Corps, but rather on messaging to Congress that the planet cannot afford to squander $550 billion-worth of investments in the larger spending bill that would address the climate crisis on a scale of historic proportions.

Yet as weeks go by without action on the “Build Back Better Act,” or even the resumption of negotiations over its future, Democrats will likely find themselves increasingly pressured to show they haven’t forgotten about a program that proved so enormously popular with their constituency.

“We should be passing climate legislation immediately, with a CCC that will create millions of jobs for young people and marginalized communities,” said Eden Alem, a spokesperson for the Sunrise Movement. “Joe Biden and Democrats were elected to pass a bold climate agenda … and they’re just not delivering.”

‘Make it to President Biden’s desk’

Congressional Democrats are working to show they’re committed to finding other ways to fund a Civilian Climate Corps without the “Build Back Better Act.”

Rep. Chellie Pingree of Maine and Sen. Jeff Merkley of Oregon, the Democratic chairs of the House and Senate Appropriations Subcommittees on the Interior and EPA, respectively, have both promised they are working to ensure a climate service program has robust funding in the fiscal 2022 government funding package that also remains subject to negotiation.

“When my staff and I were drafting the FY2022 House Interior Appropriations bill, we put everything through the lens of fighting the climate crisis. That’s why we fought to fund the nation’s first-ever Civilian Climate Corps,” said Pingree in a statement to E&E News regarding the House-passed Interior bill that proposed $101 million for the program. “I remain optimistic that funding for this critical program will make it to President Biden’s desk.”

Merkley, who in the fall introduced a Senate Interior appropriations bill that included $120 million for a Civilian Climate Corps and other conservation projects such a corps could undertake, likewise committed to standing by this funding request.

“My Interior Appropriations bill supports the President’s request to fund a CCC with annual appropriations for the Department of the Interior and the U.S. Forest Service, creating a baseline and a backbone to bring the CCC to reality for those agencies,” he said in a separate statement.

Outside the appropriations process, House Natural Resources Chair Raúl Grijalva (D-Ariz.) told E&E News yesterday that his panel is currently “exploring options” for stand-alone legislation dealing with the Civilian Climate Corps as the “Build Back Better Act” remains in limbo.

Beyond these avenues, advocates are looking to the federal agencies to make the program a reality, in some capacity.

Moffitt said the Corporation for National and Community Service, which runs AmeriCorps, has the authority to prioritize “programs that would advance climate goals” when putting out annual calls for funding.

She added that the existing Public Land Corps, which is administered through federal land management agencies, “is already involved in a lot of things that very much go hand in hand with climate action” but could do even more, like focusing on forest fire preparedness.

Paul Sanford, the national recreation policy director at the Wilderness Society, noted that Biden’s January 2021 executive order was still in effect. It instructed relevant agencies to support Civilian Climate Corps activities within their purviews and blessed $10 billion for the effort.

The $1.2 trillion, bipartisan infrastructure package signed into law last year would also bolster climate corps goals, he said, as would the Great American Outdoors Act of 2020.

“Some things can happen, even in the absence of ‘Build Back Better,’” said Sanford.

‘Make it a priority’

Still, Sanford and Moffitt both agreed the loss of guaranteed funding through the “Build Back Better Act” was a major loss that couldn’t be replicated through other channels.

“The administration … can and very well should use the existing programs to make as much of a climate corps as they possibly can — of course, drawing the distinction that if they don’t get the ample investments from the ‘Build Back Better Act’ for that program, it’ll mean thousands of jobs, rather than hundreds of thousands,” Moffit said.

“Climate change is a big deal, so we need to make big commitments to have a big impact on climate change and achieve climate remediation at large scales, and those scales that we need to in order to minimize some pretty significant effects,” said Sanford.

Without the “Build Back Better Act,” he continued, “we’ll continue to do good projects, but we won’t be able to do them at the scale we need to do them to head off the effects of climate change.”

At the same time even the staunchest backers of the Civilian Climate Corps say the treatment of the program by the “Build Back Better Act” wasn’t without complication and uncertainty.

Due to rules governing the budget reconciliation process, lawmakers decided to not specifically name the program as the beneficiary of as much as $30 billion in funding. Instead, dollar amounts adding up to such a sum, or thereabouts, were scattered throughout the bill for related climate service projects.

In fact, as advocates explained, the only reason supporters of the bill could credibly claim the Civilian Climate Corps would get anywhere close to that amount of money in the end was never based on statutory language but rather on an agreement between lawmakers and the Biden administration that the dollars would go toward fulfilling that single mission.

For Sanford and other backers of the Civilian Climate Corps, a more ideal scenario would always have been to pass a bill that specifically called for the creation of such a program, by name, with fixed, guaranteed dollar amounts attached. There are already half a dozen bills in the House and Senate that would achieve this goal.

“I’m more optimistic under this administration than under the last one that the agencies will make that a priority,” Sanford said, but he added, “if you legislate it, then you have to make it a priority.”

Grijalva, who is now mulling advancing one of these stand-alone bills through his committee, was one member who fought during “Build Back Better Act” negotiations to ensure Congress had control over at least some of the Civilian Climate Corps’ money (E&E Daily, Oct. 21, 2021).

In the House Natural Resources portion of the reconciliation bill, which the House passed last year, Grijalva was ultimately able to assign $500 million for conservation, resiliency and restoration projects on public lands managed by Interior. The Senate Energy and Natural Resources Committee’s proposed portion of the “Build Back Better Act” would have included the same provision.

Andrés Jimenez, the executive director of Green 2.0, a nonprofit working to expand diversity and representation within the environmental movement, said he agreed with Grijlava: The lack of enforcement mechanisms in the “Build Back Better Act” for a new Civilian Climate Corps was a problem, specifically hindering objectives to attract diverse applicants and serve communities of greatest need.

“The chances of having accountability are greatly improved,” Jimenez said, “if Congress plays a role in a program that is created, such as the Civilian Climate Corps.”