What’s on the chopping block in Trump’s budget request? 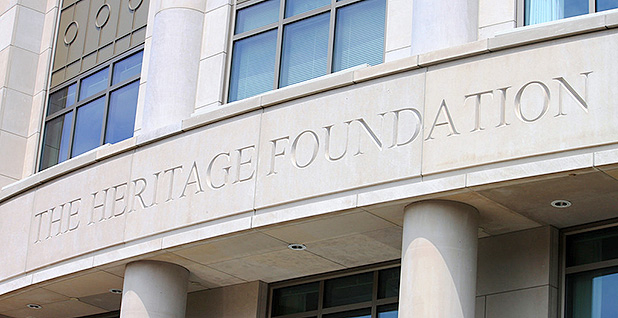 President Trump and congressional Republicans are expected to take a hatchet to the federal budget — with major cuts likely coming soon for some of the Obama administration’s top environmental and energy initiatives.

Programs that could be in the crosshairs: U.S. EPA climate offices, the renewable energy shop at the Energy Department and efforts to increase federal land ownership.

During the presidential campaign, Trump made it clear that environmental programs would be targeted. "Environmental protection, what they do is a disgrace. Every week they come out with new regulations," Trump told Fox News during the campaign, referring to EPA. He added, "We’ll be fine with the environment. We can leave a little bit, but you can’t destroy businesses."

Now that he’s moved into the White House, questions abound over precisely which programs will be purged.

"I’ve always looked on the budget as being the policy document that says where your focus really is, what you’re going to do," said Christine Todd Whitman, former EPA administrator during the George W. Bush administration.

For clues, sources close to the Trump administration point to the sweeping budget outlines laid out by conservative groups like the Heritage Foundation, Republican Study Committee and Competitive Enterprise Institute. Those groups have offered up an array of programs at agencies like EPA and the Energy Department that could soon be on the chopping block.

The Trump administration’s first major budget proposal — its request for fiscal 2018 — could come as soon as next month. The White House faces a deadline to send its annual budget request to Congress by the first Monday in February, although those requests often arrive late. Trump may submit a rough outline, with a beefed-up blueprint coming in the spring.

During President Obama’s first year in office, he submitted an outline in February, followed by a fleshed-out proposal in May.

Trump’s critics and supporters alike will be watching closely.

Myron Ebell, who led Trump’s EPA transition team, said yesterday in an interview that he sees big opportunities for cuts in that agency’s programs and workforce. He said he’d like to see the staff cut from about 15,000 to about 5,000 people (Greenwire, Jan. 26).

He pointed to CEI’s budget plan, which calls for repudiating the Paris climate accord, overturning or defunding EPA’s climate rules for power plants and telling EPA that it has no authority to use the Clean Air Act to regulate greenhouse gases.

Ebell and others say they are expecting to soon see cuts in line with what some conservative groups have long been advocating.

The heavy influence of conservative think tanks in the new administration can be seen in the fleet of staffers Trump has already brought on. Ebell and another CEI scholar helped staff EPA’s transition. And Heritage Foundation staffers were deployed throughout federal agencies to help with the administration handover. One of the political staffers now working at EPA, David Kreutzer, is a Heritage veteran.

Of course, conservative think tanks aren’t the only ones who will be influencing the federal budgets during the Trump administration. Members of Congress, administration officials with competing views, outside stakeholders and others will have strong opinions about which programs are cut, and there will be no shortage of lobbying to keep various environmental and energy initiatives intact.

"The think tank community is a good barometer of where the small government conservatives are," said Scott Segal, an industry lobbyist at Bracewell LLP.

But it’s only "a piece of the puzzle," he added. "The Trump administration has no shortage of incoming ideas from various quarters of the Republican and conservative establishment," as well as from stakeholders in the investment and infrastructure communities.

Conservative insiders also point to the Republican Study Committee’s 2017 budget blueprint as a guidepost for what may be coming.

If they gain traction, the Heritage Foundation’s proposals could mean a very different EPA.

The Heritage Foundation says that Congress — not EPA — should decide whether carbon dioxide should be regulated or considered in permit reviews. The budget blueprint also disputes the scientific consensus that humans are the driving force behind climate change.

"While carbon dioxide and other greenhouse gas emissions may have contributed in some capacity to climate variations, the available climate data do not indicate that the earth is heading toward catastrophic warming with dire consequences for human health and public welfare, nor do the data indicate that the dominant driving force behind climate change is human-induced greenhouse gas emissions," the outline says.

EPA’s civil rights programs would also be scaled back under the Heritage proposal, and EPA’s environmental justice programs would be eliminated entirely. "The EPA often applies the law to prevent job-creating businesses from developing in low-income communities, thus blocking the very economic opportunity that the communities need," the Heritage Foundation said.

Several DOE offices would be eliminated entirely under the Heritage blueprint.

Those include energy efficiency and renewable programs, a nascent-technology investment shop, and other efforts some conservatives say inappropriately promote certain energy sources over others.

The DOE Office of Energy Efficiency and Renewable Energy is among those slashed in the Heritage proposal.

Funding research and development for technologies like wind, energy and biofuels "is not an investment in basic research, but outright commercialization," according to the Heritage Foundation.

Efforts to cut that program or any DOE offices are sure to run up against opposition from agency staff and outside stakeholders with an interest in keeping those initiatives churning.

The Heritage budget would prevent the net addition of new public lands to the federal portfolio and would rev up energy production on existing federal properties.

"Congress should open all federal waters and all non-wilderness, non-federal-monument lands to exploration and production of America’s natural resources," the outline says.

The Heritage Foundation would prohibit a net increase in public lands, noting that the "federal estate is massive," and "federal ownership and federal regulation of public lands restrict economic activity, and, in many instances, have created environmental problems due to mismanaged lands and lack of a proper incentive structure to maintain the properties."

Another potential target for cuts: the Land and Water Conservation Fund. That fund, which uses royalties from offshore energy development to purchase land for parks and recreation areas, has come under fire from conservative Republicans. The Heritage Foundation says it should expire permanently. "Rather than placing more decisions under Washington’s control, Congress should empower the states and local communities to protect their environments, maximize the value of the land, and create new opportunities for economic development," the budget outline says.

An effort to target the LWCF could see opposition from Interior Secretary-designee Ryan Zinke, whose support for the program has won him accolades from Democrats and environmentalists.