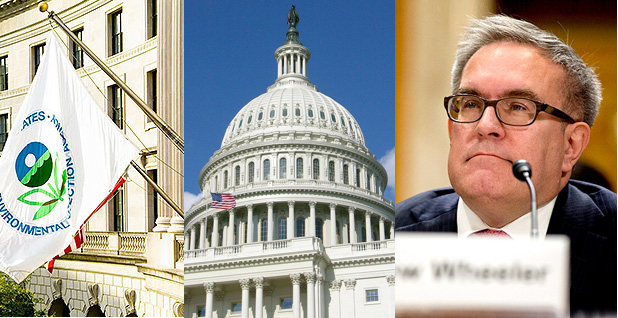 Lawmakers return to Capitol Hill this week to see a new era begin at EPA.

Democrats in Congress had called on Pruitt to step down while Republicans had grown tired of daily questions over his excessive spending and mismanagement at the agency. Wheeler is a more known quantity for lawmakers as a former longtime Senate aide and then lobbyist for energy interests.

Matt Dempsey, who worked with Wheeler on Capitol Hill as communications director for Sen. Jim Inhofe (R-Okla.), said the new EPA leader keeps a low profile that works well in policy and politics.

"Andrew is one of the good guys in Washington," Dempsey said, adding Wheeler listens to those around him and has the ability "to say why he disagrees but being able to do so in a way that makes people comfortable."

Environmentalists have already geared up to campaign against Wheeler, like they did with Pruitt. Green groups have focused on Wheeler’s past lobbying, specifically his work on behalf of coal giant Murray Energy Corp. — the company’s CEO, Bob Murray, is a vocal critic of the Obama-era EPA.

The Murray connection hurt Wheeler during his confirmation. Yet some Democrats see a chance for a fresh start at EPA.

Sen. Tom Carper (D-Del.), ranking member on the Senate Environment and Public Works Committee, peppered the agency with oversight letters while Pruitt was in charge.

But on Friday, he sent a missive to Wheeler where he compared the acting chief to William Ruckelshaus, who replaced the scandal-plagued Anne Gorsuch Burford as head of EPA during the Reagan administration.

"Andrew, you have been granted an enormous challenge and responsibility, but an even greater opportunity," Carper said.

"The damage Scott Pruitt has done to the Agency will not easily be undone," he said. "While you and I have not always agreed, and will not always agree, on every environmental policy matter, it is my hope and expectation that you will carefully consider the lessons of the past as you prepare to chart the Agency’s future."

Carper offered a number of recommendations for Wheeler at EPA, including improving transparency at the agency as well as pulling back on several policies proposed by Pruitt.

Wheeler may have to take Pruitt’s place on Capitol Hill before Carper and other senators. EPW Chairman John Barrasso (R-Wyo.)
announced last month that the panel would hold a hearing in August to examine ethics allegations against Pruitt.

Asked Friday if the committee still planned to hold that hearing, with or without the former administrator, an EPW Committee spokesman said the panel didn’t have any scheduling announcements to make.

As acting chief, Wheeler can lead EPA for 210 days under the Vacancies Act, although if Trump nominates someone else for administrator, that could lengthen Wheeler’s time in charge until that person is confirmed.

Still, Wheeler as acting chief gives the president some political respite when it comes to the lighting rod that is EPA.

Cary Coglianese, director of the Penn Program on Regulation at the University of Pennsylvania Law School, said Trump can now wait on making his next pick to lead the agency.

"People wonder, well, why did Pruitt twist in the wind as long as he did? Maybe that’s all due to the fact that Trump really liked Pruitt. But there’s also a structural, political reason why it took longer for Pruitt to go: By waiting a little bit longer and now having Pruitt go, the administration can have Wheeler at the helm past the November election," Coglianese said.

"So to the extent that Trump wants to avoid another controversial appointment, as he’s likely to have with the Supreme Court pick that will be announced soon, he could put this off," he said.

Wheeler himself has been mentioned as Trump’s next nominee to lead EPA, along with a few others. The acting administrator, however, has not said whether he would take on the job permanently.

"I’m not going to decline or accept a job I haven’t been offered," Wheeler said in an interview with The Wall Street Journal on Friday.

"The president asked me to step in as the acting administrator for the foreseeable future," he said. "I don’t know how long that will be, but that’s up to him."

The Senate confirmed Wheeler as deputy EPA administrator on a 53-45 vote this April. Three Democrats — Sens. Joe Donnelly of Indiana, Heidi Heitkamp of North Dakota and Joe Manchin of West Virginia — voted for him along with Maine Sen. Susan Collins, the lone Republican who opposed Pruitt’s confirmation.

Wheeler could reinforce and perhaps expand his support in the Senate, depending how he runs EPA. He will have to handle some tricky situations that tripped up Pruitt, such as biofuel mandates.

Asked for her thoughts on Wheeler, Heitkamp brought up the renewable fuel standard. Pruitt issued waivers to refiners from the mandate, which angered farm state senators.

"Scott Pruitt said he would support the renewable fuel standard, but that clearly didn’t hold water and I continued to hold his feet to the fire on that issue," Heitkamp said in a statement, noting she met Wheeler months ago where she pressed him on "the need for a strong RFS."

"I’m not going to let him forget that supporting North Dakota’s farmers and biofuels workers must be a top priority for the EPA," she said.

It remains to be seen if Wheeler can calm EPA’s troubled waters after months of turmoil under Pruitt.

Dempsey, Wheeler’s former colleague on Capitol Hill, believes Democrats will support the acting EPA chief as he goes about his work at the agency.

"If you ask the right questions, they’re going to say they like him, they respect him and they want to work with him," Dempsey said. "I don’t know of anyone who knows Andrew [that] doesn’t respect him."