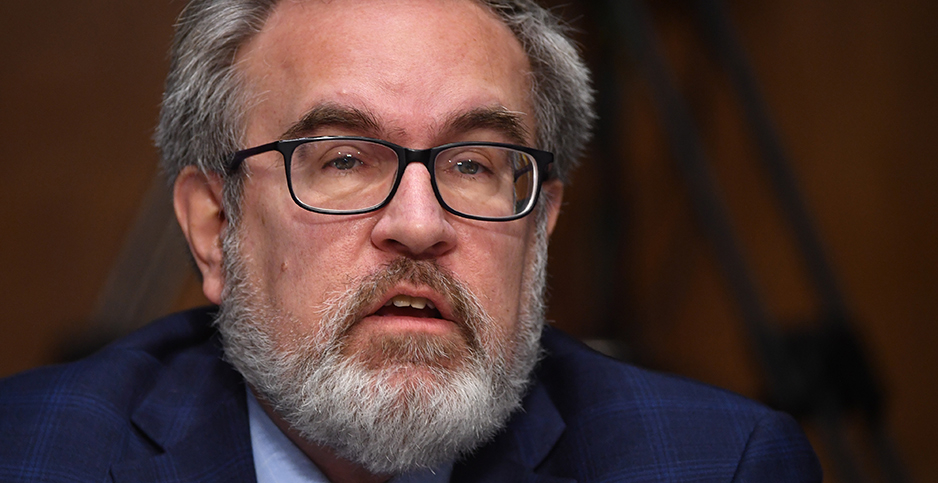 EPA’s moves to roll back a number of regulations during the COVID-19 pandemic came under fire today on Capitol Hill.

EPA Administrator Andrew Wheeler, who appeared this morning before the Senate Environment and Public Works Committee for an oversight hearing, faced questions over the agency’s recent actions to roll back tougher Obama-era clean car standards, revoke the justification behind toxic mercury air emissions standards and the continued sale of less stringent wood stoves.

Wheeler mounted a vocal defense of his agency’s work and praised EPA employees carrying out their duties during the pandemic. Yet Democratic senators pressed him often, leading to some fierce exchanges in the cavernous hearing room that was being used to stick to social distancing guidelines.

Speaking from the dais under a mask, Sen. Tom Carper (D-Del.), the panel’s ranking member, said the country was living through "scary times." He said the rollbacks taken on by EPA since the pandemic began could kill tens of thousands of people prematurely and pointed to a report his staff released (E&E Daily, May 20).

"Too often the agency has done the opposite of what it should have been doing during this pandemic," Carper said. "Heaven help us."

Carper pushed Wheeler over whether increases in air pollution could lead to more people becoming sick with COVID-19, asking him if EPA will factor in the disease when crafting future rules.

"Will you stop writing rules that will make things actually worse, not better?" Carper asked.

"All of our rules make things better, sir," Wheeler responded, who was sporting a full beard at the other end of the hearing room.

Republicans, in turn, praised the deregulatory work at EPA.

Sen. Jim Inhofe (R-Okla.), who is Wheeler’s former boss when the administrator was a Capitol Hill aide, was also full of kind words. He gave plaudits to Mandy Gunasekara, the new EPA chief of staff and another ex-Inhofe aide at the agency.

"I appreciate you looking out for the small-business interests," Capito said.

Wheeler used his opening remarks to tout EPA’s work that has been completed during the pandemic, which he said would have been impressive even during normal times. He noted the agency had also approved more than 400 products to disinfect surfaces from the novel coronavirus.

Still, Democrats on the committee took umbrage with the EPA administrator.

Sen. Chris Van Hollen (D-Md.), speaking over videoconference, asked Wheeler if mercury emissions would have been reduced if EPA had proposed to remove the legal justification behind its Mercury and Air Toxics Standards years ago. After Wheeler demurred, Van Hollen said, "The answer is no. You know the answer is no." He added that Wheeler’s contention that those emissions won’t rise now is "flat speculation."

"We were following the Supreme Court decision," Wheeler cut back in before Barrasso gaveled, bringing Van Hollen’s questions to an end.

Others at the hearing were as passionate in opposition to EPA’s rollbacks.

Markey also pushed Wheeler to apologize to "people of color in our country for what you are doing" during this pandemic, as minority populations have seen increased death rates from the virus.

Many Democrats pointed to a study linking increased air pollution to higher mortality due to COVID-19. Republicans pushed back on the review, saying it hadn’t been peer-reviewed. Wheeler added that the study had several errors and issues.

Wheeler was also questioned repeatedly about EPA’s temporary enforcement policy that gives the agency discretion on whether to pursue compliance by polluters during the pandemic. Sen. Tammy Duckworth (D-Ill.) said the agency was sending a signal to industry that EPA wouldn’t pursue environmental violations.

Wheeler said no one was allowed to increase emissions under the policy and that EPA has continued to bring criminal and civil enforcement actions since the pandemic began.

"Senator, we do not have a nonenforcement policy. That is a fallacy," Wheeler said in response to another question from Sen. Kirsten Gillibrand (D-N.Y.).