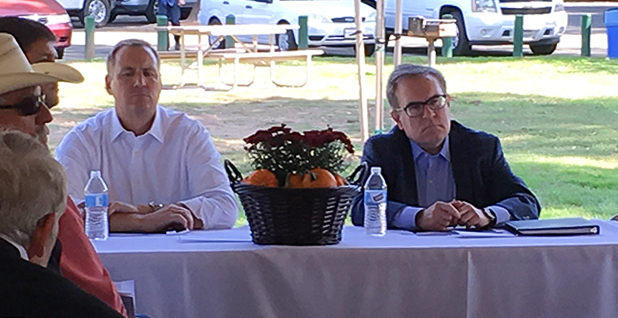 Two Democratic senators have now called for Wheeler to step down over his "liking" of a racist Facebook post in 2013 that depicted President Obama and first lady Michelle Obama looking at a banana. HuffPost first reported on the action earlier this week.

When asked whether he regretted liking the post, Wheeler said he had no memory of it.

"I don’t remember doing it. At all. I believe it was probably on accident," he said. "You know, 90 percent of my Facebook is done on my iPhone, just scrolling through it. It was not on purpose. I find it offensive. In fact, when I was shown the picture by my staff, I said, ‘What the hell is this,’ and they said, ‘It’s from your Facebook,’ and I said, ‘No, it’s not.’"

Sen. Jeff Merkley (D-Ore.) was the first senator to call for Wheeler’s resignation, tweeting Tuesday: "The head of a government agency has no place ‘liking’ racist memes or promoting the work of Pizzagate conspiracy theorists. If these are indeed Wheeler’s actions, he should do the right thing for the EPA and resign immediately."

Ahead of Wheeler’s comments yesterday, Sen. Ed Markey (D-Mass.) also called for him to "disavow" liking the post or to step down.

"Andrew Wheeler claims to not remember the racist post about the Obamas that he ‘liked,’" Markey said on Twitter. "If that’s true, he should disavow it immediately. If it’s not true, he should resign immediately. There’s no room for this disgusting, hateful rhetoric in our discourse."

Along with disavowing the Facebook post, Wheeler yesterday also addressed an ongoing rulemaking at the agency that proposes to roll back President Obama’s clean car standards.

EPA and the National Highway Traffic Safety Administration are proposing to freeze Obama-era fuel economy rules at 2020 levels, a move that has triggered a legal battle with California, which has its own tailpipe emissions standards tied to the federal ones. California’s Air Resources Board has held several meetings with EPA and NHTSA on the rules, but CARB Chairwoman Mary Nichols said the talks were not substantive (E&E News PM, Sept. 28).

Wheeler said the ball was in California’s court. The public comment period on the proposed federal rule ends Oct. 26.

"When I met with Mary Nichols, she promised that within one week of us going forward with our proposal, they would be willing to sit down and have a counter for us," he said. "It’s now been eight weeks, and I’m still waiting for the counter from CARB.

CARB asked automakers last month for data on how they were trying to comply with the existing rules, with the aim of finding "flexibilities" on which to compromise.

"Hopefully, they get that," Wheeler said.

Wheeler visited Escalon, a Central Valley district represented by Republican Rep. Jeff Denham, to learn about an upcoming rulemaking at the State Water Resources Control Board that aims to increase water flows in three rivers that feed the Sacramento-San Joaquin Delta. EPA is in charge of certifying the plan under the Clean Water Act.

Denham is facing venture capitalist Josh Harder (D) in a race rated a "Toss-Up" by The Cook Political Report. Wheeler has visited several other House Republican districts in recent months, including ones in Ohio, Kentucky, Michigan and Iowa.

Wheeler and Denham said the timing of the visit was motivated by California’s decision to hold the vote on the controversial plan as soon as Nov. 7. In other words, Wheeler was not there to support the Republican candidate in the run-up to the midterms, which could result in a violation of the Hatch Act, the federal law that prohibits civilian employees in the executive branch from using their authority or influence to affect an election’s results (Greenwire, Aug. 31).

When asked why he thought the Trump administration’s EPA policies would help rather than hurt Republican candidates, Wheeler said, "’Cause we’re doing the right thing for the American people. But that’s not why I’m here. I was in Seattle and Wyoming and other places without meeting — this isn’t a campaign thing. This is an issue that’s going to hit the agency on Nov. 7, and I can’t wait till Nov. 8 to get up to speed."

He added: "This has nothing to do with the election."