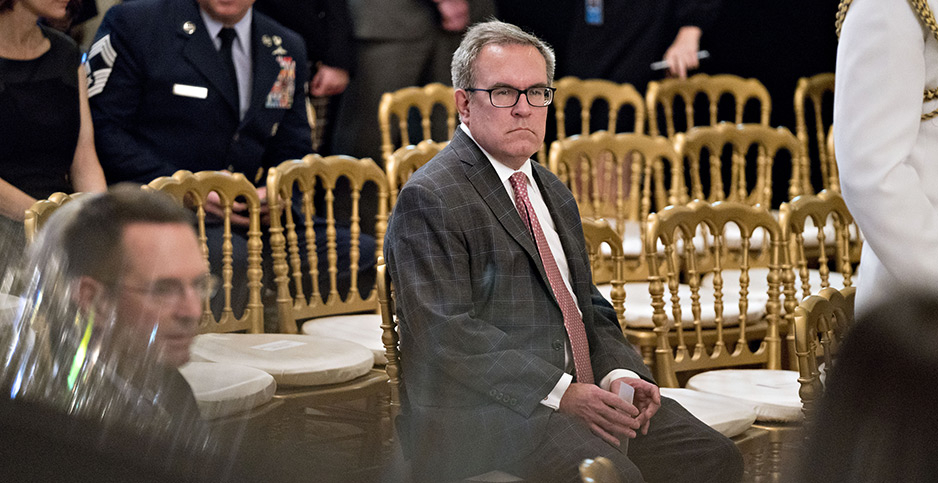 Acting EPA Administrator Andrew Wheeler is again under fire for his social media activity, prompting at least one Democratic lawmaker to call for his resignation.

The acting EPA chief was featured in recent media reports showing he used his private social media accounts — Facebook and Twitter — to interact with inflammatory content, including "liking" a racist photo of former President Obama and first lady Michelle Obama in 2013.

Wheeler isn’t the first Trump official to face backlash for tweets, posts, likes and shares. President Trump himself has repeatedly been criticized for his online comments, including those targeting lawmakers and athletes. The EPA chief was criticized for his social media activity before the latest reports surfaced yesterday in a HuffPost report (Greenwire, July 9).

But the renewed scrutiny of Wheeler’s online presence comes at a time when he’s attempting to calm the waters at an agency that was roiled by a flurry of ethics allegations against ex-EPA boss Scott Pruitt. Wheeler is also said to be eyeing a formal nomination for the top EPA post, which could be complicated by these revelations.

The renewed controversy stems from Wheeler’s activity, including "liking" a racist Facebook image of the Obamas in 2013. The photo depicts the presidential couple staring at a banana. In another case, Wheeler retweeted a message on Twitter from Jack Posobiec, who promoted the now-debunked "Pizzagate" conspiracy theory that high-ranking Democratic Party officials were involved in a child sex ring.

Ethics watchdogs say the issue could surface at a confirmation hearing should President Trump nominate Wheeler to officially lead EPA.

Nick Schwellenbach, director of investigations at the watchdog group Project on Government Oversight, said the activity is not only "disgusting" but also contrary to the Code of Ethics for Government Service, the first plank of which requires government workers to put loyalty to the highest moral principles and country above persons, party or government department.

Wheeler, a former Senate staffer and coal lobbyist from Ohio who took the agency’s helm in July after Pruitt’s abrupt exit, said in a statement that he doesn’t remember "liking" the racist social media content and wasn’t aware of the origins of other material.

"Over the years, I have been a prolific social media user and liked and inadvertently liked countless social media posts," Wheeler said in an email. "Specifically, I do not remember the post depicting President Obama and the First Lady. As for some of the other posts, I agreed with the content and was unaware of the sources."

Other Trump administration officials have resigned after their Twitter activity drew scrutiny.

And in March of 2017, another political appointee at DOE — a former massage therapist from New Hampshire — left his post after reports surfaced about his divisive posts on his Twitter account, including one linking Obama to "radical Islam" (E&E News PM, March 10, 2017).

The bulk of Wheeler’s controversial online activity occurred before he took the helm as acting administrator.

Some of that activity has touched on climate change, an issue he’s now squarely tasked with regulating.

In January, Fox News senior political analyst Brit Hume tweeted criticism of former Vice President Al Gore for connecting a cold snap as proof of a "climate crisis." "Next he’ll tell us that if the earth cools, it will cause hot weather —>," tweeted Hume.

When a commenter responded, "Hey Brit where did you get your climate science degree?," Humes replied, "Same place Al Gore got his."

Wheeler, who at the time was being vetted by the Senate to serve as the EPA’s No. 2, liked Humes’ response from his personal Twitter account, @AndrewRWheeler. Four months later, Wheeler was confirmed by the Senate.

Exactly how — or if — Wheeler’s online activity will trigger repercussions is unclear.

Schwellenbach said the Code of Ethics for Government Service lays out "squishy" principles that rarely draw penalties or investigations.

"A lot of this comes down to norms and do people feel ashamed and what kind of political firestorm is developed and what does the White House think of this," he said. "It’s not so much, ‘Will an IG investigate and find a violation?’ It’s more, ‘Is this beyond the pale?’"

The issue could be affecting staff at the agency already, he added.

"It sends the wrong signal to everyone, that he views people of different ethnicities differently," he said. "Clearly, these Obama photos are definitely strongly implied racial messages."

While the White House didn’t immediately respond when asked for comment, at least one Democratic senator has called for Wheeler to resign.

"The head of a government agency has no place ‘liking’ racist memes or promoting the work of Pizzagate conspiracy theorists. If these are indeed Wheeler’s actions, he should do the right thing for the @EPA and resign immediately," tweeted Sen. Jeff Merkley of Oregon.

News of Wheeler’s activities was circulating on Capitol Hill today, where Sen. Tom Carper of Delaware, the top Democrat on the Senate Environment and Public Works Committee, told reporters he wasn’t aware of the controversy but would soon look into it.

"This is news to me," Carper told reporters. "I have not heard anything."