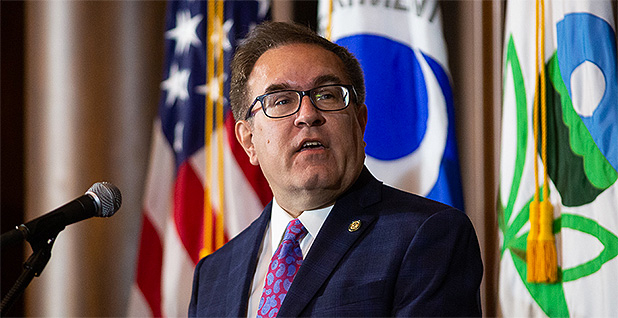 In a blistering statement, Wheeler accused lawmakers of wanting to wipe out the agency’s Water Infrastructure Finance and Innovation Act loan program, which President Trump has touted as a means for post-pandemic recovery.

"At a time when countless cities across America are facing financial difficulties, Democrats have completely gutted the Water Infrastructure Finance and Innovation Act (WIFIA), a popular loan program which has provided nearly $12 billion in water infrastructure projects and created 25,000 jobs under President Trump," Wheeler said in a statement.

The WIFIA program, he said, has saved taxpayers more than a billion dollars by offering up loans for projects in California, Florida, New York, Kansas and other states.

A House Appropriations spokesman told E&E News earlier this week the bill contains no money for WIFIA because EPA and the Office of Management and Budget did not post criteria to the Federal Register until June 30.

Evan Hollander said the fiscal 2020 bill gave the administration a 120-day deadline. The rescission and reappropriation make all WIFIA balances subject to the criteria EPA developed, he said.

Wheeler also took issue with the bill’s adding teeth to congressional oversight of EPA. "House Democrats are blackmailing the agency on the basis of their arbitrary response deadlines for congressional letters," Wheeler said.

Calling it "an election year gimmick," Wheeler said, "They are attempting to penalize the agency by threatening to withhold funds for an alleged failure to provide information regarding my predecessor that was shared with the Appropriations Committee more than a year ago."

One provision in the legislation would penalize EPA $50,000 per day from a related program account for every day the agency doesn’t respond in a timely fashion to a Government Accountability Office request for documents or interviews with staff.

Also included in the bill is a measure targeting the secure phone booth installed by Scott Pruitt, the former scandal-ridden administrator and Wheeler’s predecessor, who resigned from the agency in July 2018.

Under the provision, Congress would withhold $2 million from EPA until the agency submits a report on the phone booth (E&E News PM, July 6).

The Government Accountability Office found EPA violated appropriations law by failing to give lawmakers advance notice on its spending to install the booth.

EPA disagreed with that ruling, saying the spending was not to furnish Pruitt’s office but was needed to conduct agency business.

Agencies are required to file reports on violations of the Antideficiency Act, but as of September last year, GAO did not have such a report from EPA.

"Administrator Wheeler’s mismanagement and his predecessor’s corruption have left Congress with no choice but to ensure accountability at the EPA. It’s unbelievable to hear Mr. Wheeler criticize others’ lack of commitment to the environment after defending the president’s appalling budget requests year after year," McCollum said.

She added, "If this administration was at all serious about protecting the environment, Administrator Wheeler would be celebrating the $318 million increase that House Democrats are providing for environmental protection instead of complaining about safeguards to protect taxpayer dollars."

EPA would receive nearly $9.4 billion under the bill. That’s more than the $9.1 billion in current funding for the agency and the $6.7 billion Trump proposed for EPA in his fiscal 2021 budget plan.

Wheeler also blasted Democrats for including provisions the Trump administration has pushed on both methane and Section 401 of the Clean Water Act.

"The House Majority is trying to score political points instead of putting forward a realistic appropriations bill," said Wheeler.

"They are trying to undo common-sense regulations put forth by the Trump Administration that update Section 401 of the Clean Water Act and make lawful methane adjustments that have saved taxpayers millions of dollars while protecting human health and the environment, and allowing American businesses to flourish."

Wheeler continued: "Rather than looking out for the health and safety of Americans and the environment, House Democrats are playing politics at the expense of both communities across the country and EPA career employees."

One provision in the House spending bill would bar EPA from finalizing a rollback of Obama-era standards restricting oil and gas methane emissions. That rule, however, is expected to be completed before the legislation becomes law (E&E Daily, July 7).

Yet another provision would bar any funding made available under the spending bill to be used to finalize, implement or enforce a rule EPA unveiled this summer to limits states’ ability to block energy projects under Section 401 of the Clean Water Act (Greenwire, June 1).