Wheeler: ‘I have some questions’ about climate report 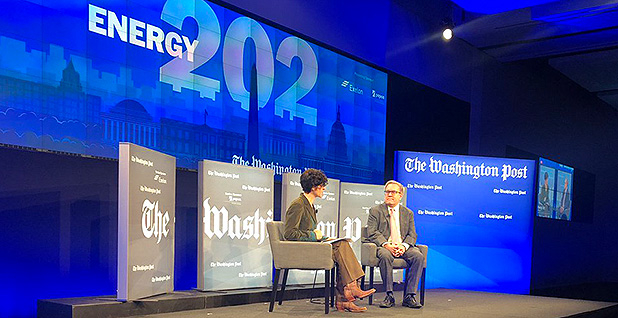 Acting EPA Administrator Andrew Wheeler is working his way through a massive climate change report that has roiled the Trump administration.

The latest National Climate Assessment — mandated by Congress to be prepared by scientists in 13 federal agencies and released every four years — offers dire predictions for the planet’s future, due to the rise of carbon emissions. The new report was released on Black Friday last week and has been blasted by President Trump and other senior administration officials.

Wheeler, speaking this morning at an event hosted by The Washington Post, piled on to efforts to downplay the study.

"I think a lot of the criticism that you’re seeing from the Trump administration on the report is the emphasis from the media on the ‘worst case’ scenario," Wheeler said, adding that the report downplayed innovation that has helped reduce carbon emissions.

Climate change could be devastating for the United States, according to the report, shrinking the economy by 10 percent by the end of this century as wildfires and flooding increase (Climatewire, Nov. 23). Trump and others have sought to downplay those worries.

The acting EPA chief said the majority of the report was written in 2016 during the Obama administration and has been under review since Trump took office. He also noted that he is still reading the report, which he didn’t review prior to its publication.

Wheeler — whom Trump plans to nominate for EPA administrator — also addressed other priorities he has at the agency, including plans to hire a human resources director to help manage the agency’s shrinking workforce.

He also said that EPA is "very close" to an announcement of a rewrite of the controversial Waters of the United States rule, and that the agency should have an updated rule out early next year to prevent lead seeping into drinking water.

Asked for his thoughts on the incoming Democratic House next year, Wheeler said he welcomed the scrutiny.

Becerra to use ‘every single piece’ of climate report

California Attorney General Xavier Becerra was also at the Washington Post event this morning. He said the climate report, which he called a "scathing indictment" of Trump’s policies, could play into litigation by the state against the federal government.

"We will use every single piece of that report where we can to continue to do the work for the federal government that it’s unwilling to do," Becerra said.

Asked whether California would go to court to hold the federal government accountable for climate change, Becerra ducked specifics but promised strong legal action if needed.

"If I find someone is getting in the way of our being able to move forward, we’ll take whatever action we need to, including going to court," he said.

California has faced increasing pressure from some environmental activists to file the type of nuisance litigation several municipalities and the state of Rhode Island have lodged against energy companies, or a challenge similar to the so-called kids’ climate case to force increased government action on climate change.

Becerra, who served with Rep. Nancy Pelosi (D-Calif.) in the House, said he expects she will prevail to be the next speaker despite some opposition in her party. He praised her, calling her "tenacious" and saying she was the right person to lead the House, as it provides a "check and balance" on the Trump administration.

"I would just tell the president ‘get ready’ because she’s very good," Becerra said.