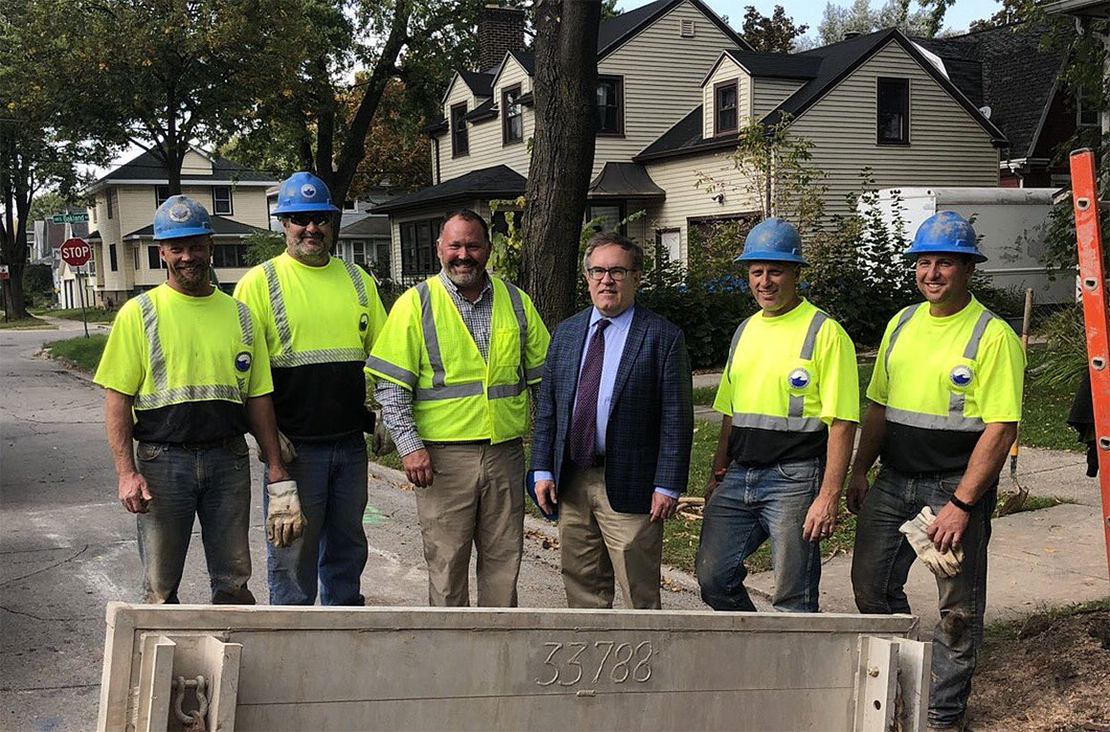 At the same time, the language appears to undercut President Biden’s own call for $45 billion to remove all the lead pipelines snaking across the United States to deliver water to schools and homes, a major source of drinking water contamination.

Wheeler today in an interview said the infrastructure package provides funds that are critical for water testing in schools and day cares as children are most vulnerable to lead contamination in drinking water.

The former administrator said that vulnerability is why the Trump administration requested testing at schools, and he’s happy to see the Senate bipartisan infrastructure package, the text of which was released last night, direct money toward removing lead service lines. Lead, a neurotoxin, can cause developmental delays, learning disabilities and behavioral problems and is especially harmful to young children (E&E Daily, Aug. 2).

Wheeler also tweeted from his personal account that he was pleased to see the bipartisan infrastructure bill builds off the Trump EPA’s program to test drinking water for the first time for lead contamination in schools and day care centers, adding he “was proud to sign the reg last year to ensure no new #flints.” He is now a visiting fellow at the Heritage Foundation.

To be sure, EPA under President Trump’s watch faced criticism for taking too long to regulate the neurotoxin (Greenwire, Feb. 7, 2018). And while the Trump administration touted its final regulation last year — which revised the Lead and Copper Rule — as necessary, protective and critical for closing loopholes, critics said the regulation slowed the pace of replacing some of the most contaminated lead service lines (Greenwire, Dec. 22, 2020). The Biden EPA has since delayed the implementation of the rule and consequently announced it will take more public comment on the regulation.

The back-and-forth has also played out in politics. Leading up to the 2020 elections, Wheeler highlighted the Trump administration’s revisions to the Lead and Copper Rule — the first major update to the regulations in 30 years — and the water contamination crisis that unfolded in 2014 under the Obama administration in Flint, Mich., when the central Michigan city changed its water source. Flint River water was pumped through the city’s pipes without being treated with inhibitors, allowing dangerous levels of lead, a potent neurotoxin, to leach from the pipes and into the city’s water supply (Greenwire, Oct. 20, 2020).

“On the campaign trail, President Trump said he wants to make sure that there were no more Flint, Michigans, and that has been a guiding principal that he directed us to,” Wheeler told ABC News in an interview.

The Trump administration last year finalized revisions to the Lead and Copper Rule, touting it as protective and necessary and closing loopholes, while critics argued the rule would slow the pace of replacing some of the most contaminated lead service lines (Greenwire, Dec. 22, 2020). The Biden EPA has since delayed the implementation of the rule and consequently announced it will take more public comment on the regulation.

In recent weeks and months, the Biden administration has moved to tout its own work on the issue of lead in the infrastructure discussions, vowing to remove lead service lines across the nation at a cost of $45 billion.

But the legislative text unveiled last night and now making its way through Congress provides $15 billion for such work, half of which would take the form of loans that will need to be paid back.

Advocates and some House Democrats have said those funds do not match the need, while industry has said a more accurate price tag hovers around $60 billion to remove all lead pipes.

“President Biden has said that to protect millions of American children, we need to spend $45 billion to replace every lead service line in the country,” said Erik Olson, who leads the Natural Resources Defense Council’s health program. “At least that much is needed to do the job. We’re hopeful that the $15 billion in this bill is a down payment and that full funding will come in a Reconciliation or other bill.”

Sri Vedachalam, director of water at the Environmental Policy Innovation Center, tweeted: “For months, the White House and POTUS have claimed that passing the infrastructure bill will eliminate lead pipes from the country. Although it has many good elements … this bipartisan bill doesn’t go far enough to address our lead crisis.”

Wheeler today said it’s critical that the mapping of lead service lines, which started under the Trump administration, continue — in order to get a handle on how much it will cost to remove all lead lines. When asked about the Biden administration’s move to delay the implementation of the regulation EPA finalized last year, Wheeler called it a “mistake” and said he hopes the delay doesn’t also translate into a slower or stalled mapping effort.

Dan Hartnett, chief advocacy officer for the Association of Metropolitan Water Agencies, said $15 billion is the biggest investment the federal government has ever made in helping water systems and homeowners replace lead service lines and that it will make real progress in getting lead out of the ground.

But Hartnett also said that no amount of money alone can guarantee the replacement of 100% of the nation’s lead service lines because fully replacing the public and privately owned portions of a lead service line requires cooperation between both utilities and homeowners.

“The job cannot be completed unless private homeowners consent to the work being carried out on their property,” Hartnett said in an email. “Nevertheless, this level of federal investment is a major step forward.”