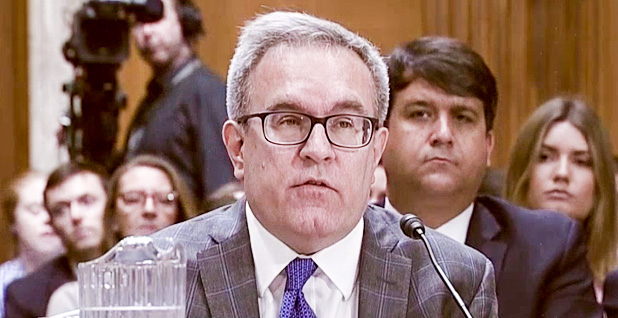 Acting EPA Administrator Andrew Wheeler sat down for his first congressional hearing as head of the agency this morning.

Appearing before the Senate Environment and Public Works Committee, Wheeler faced a number of policy questions about how he plans to run EPA. He took over last month after Scott Pruitt resigned under heavy scrutiny for alleged excessive spending and misuse of his office.

Senators expressed relief that instead of asking Pruitt about his various scandals, they were greeted with a familiar face in Wheeler, who had served as the panel’s staff director in the past.

"I’m even more pleased that our acting administrator is sitting in front of us instead of his predecessor," said Sen. Tom Carper (D-Del.), the committee’s ranking member. He noted that he read a report that Wheeler likes to collect Coca-Cola memorabilia and offered a bottle of the soft drink with the word "Wheeler" printed on it.

"You will probably need something stronger before we’re finished," Carper joked.

"Thank you for the Coke. I need to clear it with our ethics in-house, but thank you," Wheeler would later say to the lead Democrat, garnering laughs from the hearing’s attendees. "I will buy it off you if I have to."

Carper praised Wheeler for the change of tack at EPA from Pruitt’s management of the agency, including posting daily calendars, inviting the press to cover EPA events and a renewed respect for career staff. He pushed Wheeler, however, to also reverse Pruitt’s environmental policies, which observers expect the new acting chief to carry on.

Wheeler may one day assume the EPA post permanently, if nominated by President Trump and confirmed by the Senate.

At the start of today’s hearing, Sen. John Barrasso (R-Wyo.), the committee’s chairman, encouraged the president to nominate Wheeler for administrator. He said he has been impressed by Wheeler’s actions so far and that he is well-qualified for the job.

"I believe Andrew Wheeler would make an excellent administrator of the Environmental Protection Agency," Barrasso said.

Barrasso would later ask Wheeler to address what had been a main sticking point during his confirmation process over the past year to be deputy EPA administrator — his lobbying past at Faegre Baker Daniels LLP.

The chairman noted that Wheeler had met with some of his former lobbying clients. E&E News reported last week that Wheeler had at least three meetings with past clients since he joined EPA in April as its deputy chief (Greenwire, July 26).

Wheeler said he was committed to following Trump’s ethics pledge and other ethics regulations. He also said he had not met past clients one-on-one that he worked with during the two years prior to him joining EPA. He noted other clients had gone to widely attended speeches by him, not solo meetings, which should be in line with ethics rules.

The acting EPA chief took opportunities during today’s hearing to hit a familiar theme for the Trump administration — rollbacks of environmental rules as relief to industry. Wheeler touted "certainty" as how he wants to approach EPA’s rulemaking.

"My solution is to provide more certainty not just to the regulated economy but the American people, too," Wheeler said.

"The largest source of air pollution in our country today is not coal-fired utilities, it is not manufacturers, it’s not cement plants, it’s mobile sources. If you were presented a proposal that both the auto industry and the state of California — and 12 states aligned with them — could support, would you welcome such a compromise?" Carper asked.

Wheeler replied he would welcome a compromise and noted the agency was taking comments on proposals that ranged from a flatline approach to those proposed by President Obama, "with a number of steps in between."

"Could we assume if there was such a deal, essentially a 50-state deal, that there would be no effort to pre-empt California?" Carper asked.

Wheeler replied that both his and the administration’s goal was to have a 50-state solution and they did not want an answer that would "necessitate pre-empting" California.

"However, it’s important there are a number of goals in the proposal. There are important goals on highway safety. So we have to make sure those are met. The proposal will save 1,000 lives per year, which I think is very important we maintain that in the final regulation that goes forward," Wheeler said.

Carper stated that automakers in his state were unanimously asking for more predictability and certainty and would accept more rigorous standards as long as they would not be spending years in court battles.

Wheeler was also pressed on the renewable fuel standard. The biofuel mandate proved troublesome for Pruitt, especially after he granted waivers to refiners from the RFS, which whittled away at Republican support for the last EPA chief.

Today, farm-state Republicans on the panel asked for Wheeler to open up the process, showing it will remain a concern for the acting administrator.

Wheeler responded, "We’re looking at what we can do to not only provide more flexibility in the program but assistance to the agricultural community."

Other senators pushed Wheeler on their own parochial interests at this morning’s hearing. Sen. Ben Cardin (D-Md.) asked Wheeler if EPA would continue to support the federal role in the Chesapeake Bay cleanup program.

Wheeler said it remains "a high priority," noting he planned to meet with leaders involved with the program next week, and he even lives in an area affected by the body of water.

"I don’t consider that a conflict, so you can do whatever you want to protect our bay," Cardin said.

Sen. Cory Booker (D-N.J.) asked Wheeler if he could commit to submitting EPA’s proposal to ban methyl chloride — a deadly chemical used in paint strippers — to the Office of Management and Budget within two weeks. Wheeler wouldn’t commit to that timeline but did offer, "We are trying to move it forward quickly as we can."

Whitehouse made note of Wheeler’s industry ties and appealed for him to consider climate change, given the impact it is having on the coastline of his state of Rhode Island. Please take into account the concerns of "those who will have to redraw the maps," Whitehouse said.

Prior to its hearing with Wheeler, the committee approved several of Trump’s nominees, including his pick to lead the White House Council on Environmental Quality and two EPA officials (see related story).