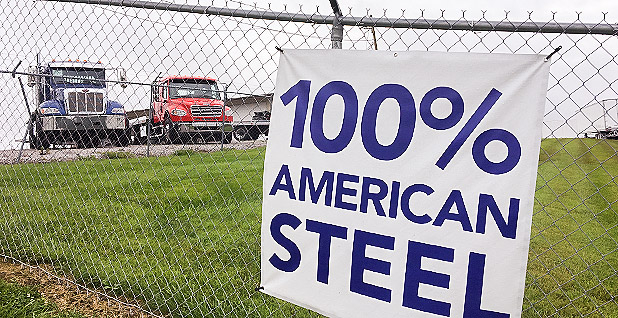 Amid an escalating dispute over the science behind high-polluting trucks, acting EPA chief Andrew Wheeler was willing to hear industry’s concerns.

The meeting was with Jon Toomey, a lobbyist for glider kit manufacturer Fitzgerald Peterbilt. Steve Milloy, a climate skeptic and former Trump EPA transition official, was also in attendance.

The meeting took place a month before former EPA Administrator Scott Pruitt said the agency wouldn’t enforce a production cap on the high-emission trucks (Greenwire, July 9). Wheeler has since withdrawn that order, but EPA is moving forward with a proposed repeal of emissions standards for gliders.

Paul Billings, national senior vice president for advocacy with the American Lung Association, said he was alarmed to learn Wheeler met with industry about gliders but the meeting wasn’t included on his public calendar.

"Any entity should have the ability to meet with EPA leadership about topics of concern," Billings said. "We’re very concerned about Fitzgerald’s efforts to reopen the dirty glider kit loophole that will result in thousands of premature deaths."

"Wheeler came into office and promised to do things much more transparently and much more by the book," Pardee said. "Very clearly, that hasn’t happened."

Fitzgerald’s clout was on full display under Pruitt, who resigned in July amid a crush of ethics allegations.

Pruitt held a private meeting with Fitzgerald representatives before proposing to repeal the glider rule last year. He also cited a study bankrolled by Fitzgerald that found gliders are more efficient and cleaner than new rigs (Greenwire, Nov. 27, 2017).

That study is now the subject of an academic inquiry and has been disavowed by Tennessee Tech University, which produced it (Greenwire, Feb. 23).

Meanwhile, Milloy has been a loyal lieutenant in Fitzgerald’s quest. He has successfully urged congressional Republicans to probe an EPA study that found gliders emit as much as 55 times the air pollution of new trucks. That study will be the focus of a House Science, Space and Technology hearing on Thursday.

Reached for comment yesterday, Milloy confirmed that the meeting was about gliders. He said he was not paid by Fitzgerald for his work.

"I was helping out as a friend," Milloy said. "It was pro bono work."

In response to an emailed list of questions, DePew said Fitzgerald would decline to comment for all E&E News stories about gliders.

"I had a chance to read your articles and your publication’s articles. Many of them appear to be partisan pieces attacking this administration," DePew said. "Fitzgerald Glider Kits has no interest in getting entangled in or furthering your agenda."

Fitzgerald has had a powerful ally in Rep. Diane Black (R-Tenn.). In 2015, Black introduced an amendment to an appropriations bill that would prohibit EPA from regulating gliders as part of its greenhouse gas rules for big rigs. The amendment cleared the House by voice vote.

The company spent $23,000 on lobbying in the second quarter of fiscal 2018, according to lobbying disclosure forms released by the Senate. It only employed one lobbyist, Toomey, who was a former staffer in Black’s office.

Black recently lost the GOP nomination for governor of Tennessee — the latest House Republican casualty in the midterm cycle. But Fitzgerald has another powerful ally in Milloy.

Earlier this year, Milloy obtained communications between EPA staffers at the National Vehicle and Fuel Emissions Laboratory in Ann Arbor, Mich., and Volvo Group employees through the Freedom of Information Act. The communications showed Volvo had supplied EPA with gliders for testing purposes.

Milloy posted the documents to his website, JunkScience.com, where he argued that Volvo had unduly influenced the testing results to show that gliders were dirtier than new trucks. Volvo, a truck manufacturer, is in competition with the glider industry.

Shortly after Milloy posted those documents, GOP members of the House Science Committee sent a letter to EPA raising concern about Volvo’s influence on the testing results (E&E Daily, July 13).

EPA air chief Bill Wehrum reassured the lawmakers that the agency’s findings on gliders were not politically motivated (Greenwire, Aug. 24).

But the House Science Subcommittee on Environment still plans to hold a hearing Thursday titled "Examining the Underlying Science and Impacts of Glider Truck Regulations."

Billings of the American Lung Association said he expects the GOP lawmakers to raise concern about the Ann Arbor study but not the Tennessee Tech study.

"I think there will be an attempt at the hearing to suggest that something untoward happened in the Ann Arbor lab," Billings said. "I think it’s pretty clear from Bill Wehrum’s response that EPA didn’t engage in anything untoward, and the fact remains that these trucks are extremely dirty."

He added, "There are questions around science associated with this proposed rulemaking, and those questions are about the use of the Tennessee Tech study, which is still subject to a misconduct investigation."