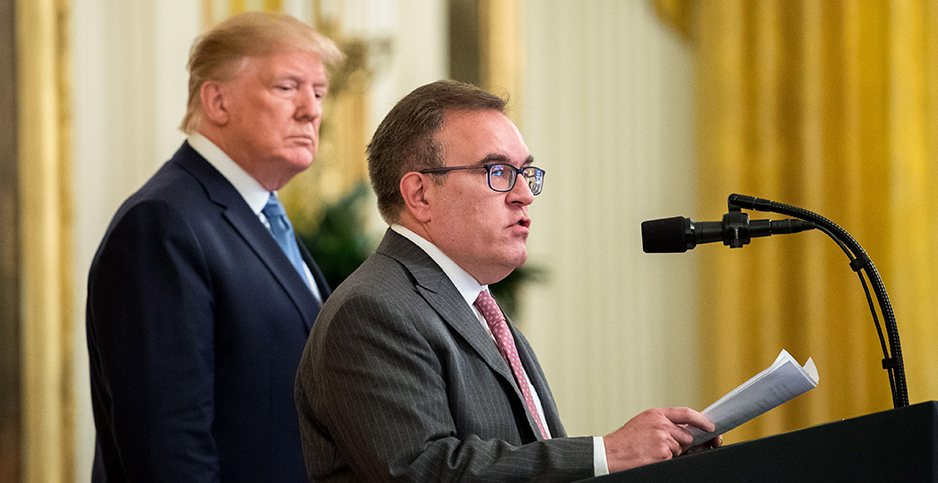 EPA Administrator Andrew Wheeler may have offered some new information last week about the legal arguments behind President Trump’s decision to pull out of the Paris Agreement.

In a call with reporters last Monday ahead of Trump’s White House environment speech, the administrator told reporters that the United States couldn’t have stayed in Paris because doing so would have jeopardized Trump’s deregulatory agenda.

That’s not necessarily a new line from the administration; Wheeler’s predecessor, Scott Pruitt, and then-White House Counsel Don McGahn, top administration agitators for leaving the deal, debuted it in meetings before the president announced plans to leave Paris in June 2017. Trump allies on Capitol Hill and in agencies have been using it ever since.

But Wheeler’s explanation was different. When a reporter asked whether Trump still sought to "renegotiate" Paris, Wheeler mentioned a Clean Air Act provision that has been used once in the law’s 40-year history. He said it would have made Trump’s domestic agenda impossible if the United States stayed in the deal.

"Another aspect that a lot of people gloss over is that, under the Clean Air Act — I believe it’s Section 115 of the Clean Air Act — if we enter into an international treaty, such as the Paris climate accord — if we fail to meet our targets, those are enforceable under our domestic laws," Wheeler said. "Most other countries who are signatories to the Paris climate accord don’t have that same constraint."

EPA did not respond to requests for clarification or comment. But Clean Air Act experts from both the environmental and industry sectors agree that Section 115 would not have amounted to a "constraint" on Trump’s abandonment of President Obama’s Paris pledge, as Wheeler seemed to suggest last week.

Still, in mentioning the Clean Air Act provision, Wheeler strayed from the more usual arguments offered by Paris opponents. They tend to argue that the largely nonbinding 2015 agreement could come to dominate U.S. energy policy — to wit, that the United States always honors its treaty commitments, and that the agreement is bound to turn up in litigation.

EPA has only used Section 115 once, in an early 1980s attempt to contain acid rain between the United States and Canada.

It kicks in if EPA, having received "reports, surveys or studies" from an "international agency" showing that U.S. emissions are harming public health outside its borders, decides to issue an endangerment finding. EPA can then compel states where the pollution originates to revise their plans for that pollutant "to prevent or eliminate" the harm to the foreign population — but only if the other country does the same.

It’s not clear what Wheeler was getting at; the Clean Air Act has seldom come up in deliberations about Paris. One of the exceptions is a letter Republican senators wrote to Trump in the waning days of May 2017, a week before his Paris announcement in the White House Rose Garden, to warn him that staying in the Paris accord would be a "key risk" to Trump’s hopes of undoing Obama’s Clean Power Plan.

The 22 senators contended that Section 115 "mandated" that EPA and the states curb a pollutant "after two tests are met." EPA had already met the first test when it established in its 2009 endangerment finding that greenhouse gas emissions endanger public health.

The other was for reciprocity. The letter’s signatories — led by Senate Environment and Public Works Chairman John Barrasso (R-Wyo.) and Sen. Jim Inhofe (R-Okla.), and including Senate Majority Leader Mitch McConnell (R-Ky.) — counseled Trump that Paris fit the bill.

"Environmentalists will argue that these section 115 requirements are, in fact, met more easily by the Paris Agreement because it includes enhanced transparency requirements," they wrote, referring to the accord’s only legal requirement, which calls on parties to disclose information on their progress toward voluntary commitments on a set schedule.

"Leading environmental attorneys have been candid that they intend to use the Paris Agreement and the existing endangerment finding to force EPA to regulate under Section 115 of the Clean Air Act," stated the senators.

The letter stays mum about which "leading environmental attorneys" had been so candid, and the EPW committee did not return calls for comment. But Clean Air Act experts reached by E&E News — including David Bookbinder, former chief climate counsel for the Sierra Club and the only lawyer the GOP letter mentioned by name — said mounting a legal challenge to force an unwilling EPA to use Section 115 to regulate greenhouse gas emissions would be difficult or impossible.

Gerrard questioned whether a foreign country could sue the U.S. government, while Jeff Holmstead, who represents industry clients for Bracewell LLP, said any such challenge would be unlikely to succeed.

"Even if a lower court were to accept this argument, the issue would almost certainly go to the Supreme Court, which isn’t going to buy it," he said.

Section 115 wouldn’t kick in automatically, Clean Air Act experts said. EPA and State Department leadership would have to lay the groundwork for it proactively, in lieu of other Clean Air Act provisions like Section 111(d), which EPA used to limit power plant carbon dioxide under both Obama and Trump.

There’s also the question of whether EPA’s 2009 endangerment finding for greenhouse gas emissions would in fact suffice for Section 115, as the Republican letter says it would. The finding, which underpins EPA’s authority and obligation to regulate greenhouse gases, states that it "is not evaluating international effects to determine whether populations in a foreign country are endangered."

EPA would likely need a new international endangerment finding before it could use 115.

But while environmental lawyers aren’t chomping at the bit to mount challenges related to Section 115, several have proposed that a pro-climate-action administration could use the long-dormant section to wring deeper greenhouse gas reductions out of the American economy.

A year before McConnell, Barrasso and their colleagues wrote to Trump, a group of environmental law experts — including Gerrard, Sabin Center Executive Director Michael Burger, Jason Schwartz of New York University Law School’s Institute for Policy Integrity and others — published a 65-page article proposing that a future administration consider 115 as a way to build on Obama’s climate legacy.

The authors saw broad possibilities in the provision. It would let EPA direct states to set plans to cut carbon across their economies rather than working incrementally by sector, and afford enough flexibility to allow cap-and-trade and other market-based compliance mechanisms.

International actions including Paris would ensure that the reciprocity requirement was met, they wrote.

"The time is ripe for EPA to consider use of its authority for international air pollution control," they wrote.

At least one Democratic presidential contender seems to be looking into the idea. Washington state Gov. Jay Inslee’s climate change plan calls for EPA to consider greenhouse gas regulations under 115.

But Bookbinder argued that Section 115 would disappoint environmentalists who hoped it would make up for years of lost time under Trump by delivering economywide reductions without legislation.

"What they like about 115 is that they don’t have to go sector by sector; all we have to do is wave our magic wand, and all of a sudden, EPA can order whatever it wants," he said.

But Bookbinder questioned whether Paris would meet the reciprocity requirement because commitments made under it are voluntary. He raised legal questions about state plans to regulate carbon and noted that the Clean Air Act’s mandate that EPA compel states to "prevent or eliminate" threats to foreign health went well beyond its protections for U.S. citizens, which are based on EPA identifying a so-called best system of emissions reduction.

Section 115 does not allow states to consider economic concern when mandating reductions, he said, and the law requires EPA to reject state plans that are insufficiently protective. Those provisions haven’t been tested in court.

"If EPA wants to deal with endangerment in the United States, it’s constrained by A, B and C, but if they want to deal with the exact same thing in Ghana, EPA can order anything it wants?" Bookbinder said. "That won’t make it out of the starting blocks."