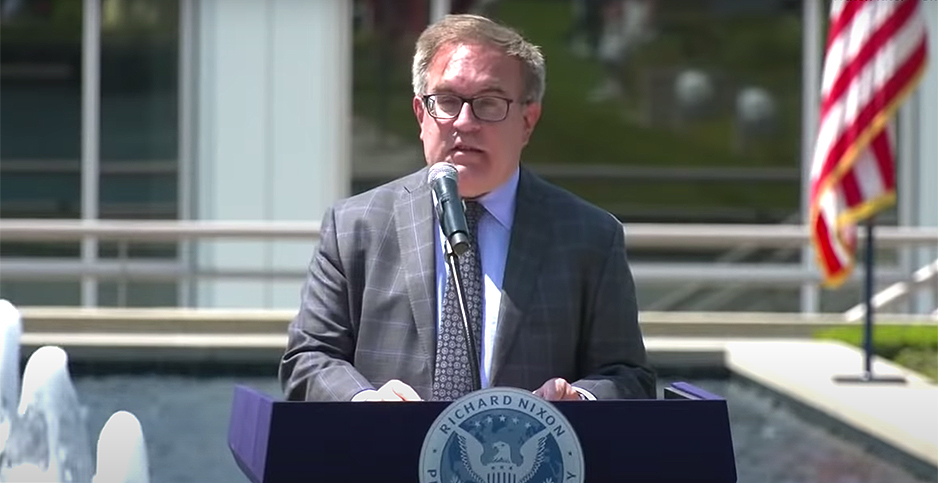 EPA Administrator Andrew Wheeler yesterday laid out plans to continue a deregulatory drive and focus on toxic waste cleanups, among other priorities, if President Trump were to win a second term.

At the Richard Nixon Presidential Library and Museum in Yorba Linda, Calif., in a speech commemorating EPA’s 50th anniversary year, Wheeler espoused "community-driven environmentalism" to clean up abandoned areas and ready them for economic growth. He also promised further expansion of the Trump administration’s deregulatory push that could remake how EPA crafts its rules for years to come.

"We could do a lot of good if the federal government, through Congress, puts resources to work with a fierce focus on community-driven environmentalism that promotes community revitalization on a greater scale," Wheeler said. "This will do more for environmental justice than all the rhetoric in political campaigns."

The EPA administrator described "five new pillars" in how the agency is operating today — some of which would be broadened under another four years of Trump. They include cost-benefit and science transparency analysis for EPA regulations as well as disclosing the agency’s guidance documents, realigning its regional offices and implementing a "lean" management system, he said.

"The focus of the next 50 years cannot be like the last 50," Wheeler said, adding that EPA has proved it can protect the environment, but it has not accomplished "environmental justice goals of fairness and good environmental outcomes" for Americans.

Wheeler noted that EPA has started a cost-benefit rule for the Clean Air Act. The agency would go further in a Trump second term.

"We will implement a cost-benefit regulation for all our environmental statutes by 2022," Wheeler said.

EPA would do the same with its controversial rule regarding scientific data used to develop regulations. The proposal has faced strident criticism, since it could prevent EPA from using public health studies that rely on confidential data. Wheeler said the rule will be finished this year.

"After finalizing the science transparency rule later this year, we will then conduct a statute-by-statute rulemaking, much like our cost-benefit rule approach," Wheeler said.

President Nixon created EPA in 1970. The agency has gone through highs and lows but has faced especially strong condemnation during the Trump administration from Democratic lawmakers, environmental groups and even past EPA administrators.

EPA has sought to undo many of the environmental regulations from the Obama administration, including weakening greenhouse gas emissions standards for cars, replacing the power plant carbon rule and limiting the agency’s authority over wetlands. Other rules that have been targeted deal with toxic mercury air pollution and wastewater from coal-fired power plants.

Wheeler’s speech laying out his vision for EPA did not win over his critics.

"The actions over the last three and a half years by Trump’s EPA political leadership has put lives in all communities at risk but especially our most vulnerable communities," Mustafa Santiago Ali, now with the National Wildlife Federation and formerly a top environmental justice official at EPA, said in a statement.

"Their decisions to weaken and roll back basic air and water protections increase chronic medical conditions, expand sacrifice zones across our country, increase susceptibility to COVID-19 and send a clear message that … Black, Brown and Indigenous lives have little value to the current Administration."

Wheeler also laid out "five priorities" for EPA in Trump’s second term, including community-driven environmentalism and revamping water infrastructure as well as reworking programs for Superfund, permitting and pesticides. Wheeler said he wants to tear down walls between agency programs so EPA can provide a more comprehensive approach to protecting the environment.

"For communities, traditionally, EPA has focused on environmental issues in a siloed manner that only looks at air, water and land separately, and states and local communities end up doing the same thing because they mirror and mimic the EPA," Wheeler said.

"We will change this, and one area is to look at the Brownfields grants program, environmental justice issues, air quality, for example, in each community at the same time and encourage those communities to do the same."

The EPA administrator also said the agency could "reinvigorate" the Superfund program, which cleans up toxic waste sites across the country.

"EPA has allowed litigation and bureaucracy to dictate the pace of Superfund projects, instead of focusing on improving the environmental indicators and moving sites to completion," Wheeler said.

Wheeler also peppered his speech with criticism of the Trump EPA’s detractors and the attention paid to climate change, saying it has not helped places in need of assistance now.

"Unfortunately, in the past decade or so, some members of former administrations and progressives in Congress have elevated single-issue advocacy — in many cases focused just on climate change — to virtue-signal to foreign capitals over the interests of communities within their own country," Wheeler said.

The battles with California have become heated over the past year, with the agency threatening federal highway funds for the state. In addition, the Government Accountability Office now plans to review EPA’s recent enforcement actions against San Francisco over the city’s wastewater treatment facilities, while the EPA inspector general office also says it may look into the matter.

Wheeler concluded his speech on a personal note, departing from his prepared remarks.

He noted that his "first political memory" was as a 7-year-old watching 1972 election returns on television and sharing the results with his mother. Wheeler said his mother, who was interested in Nixon, was "always my political adviser" and died this March.

"This past Sunday would have been her 88th birthday, and I want to thank the library, because I know she’s looking down and very proud of the fact that I’m here at the Nixon Library today," Wheeler said.