Wheeler on climate: ‘I don’t see it as the existential threat’ 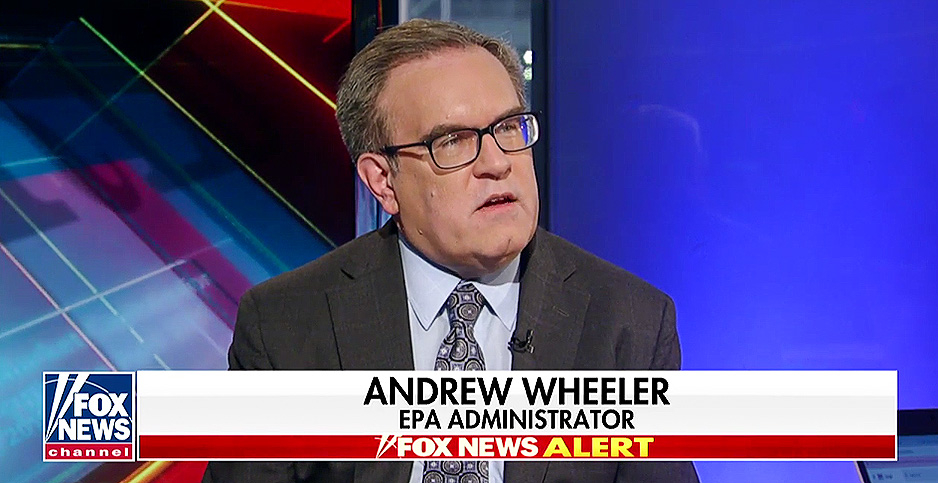 Payne asked the newly minted EPA chief: "Do you see [climate change] as the existential threat that within 12 years, if we don’t do anything, that’s it, we’ve crossed the Rubicon, kiss Earth goodbye?"

Wheeler responded: "No. You know, as far as the largest environmental issue facing the planet today, I would have to say water. The fact that a million people still die a year from lack of potable drinking water is a crisis."

A recent U.N. Intergovernmental Panel on Climate Change report warned that greenhouse gas emissions must be halved by 2030 or the world will see catastrophic consequences, with millions of people exposed to extreme heat waves and flooding from sea-level rise (Climatewire, Oct. 9, 2018).

Most climate scientists agree that global warming poses a severe threat to life on Earth, although some remain optimistic that humans will be able to avert the worst impacts if governments take strong action to rein in emissions.

Wheeler’s words struck a sharp contrast with those of Minnesota Gov. Tim Walz (D), who said at a news conference yesterday announcing a clean energy proposal: "Climate change is an existential threat. We must take immediate action."

Since his Senate confirmation last week, Wheeler has been making the rounds among conservative news outlets.

The Senate confirmed Wheeler to lead EPA on Thursday. The 52-47 vote was largely split along party lines (Greenwire, Feb. 28).

In an interview with the Breitbart News Network at the Conservative Political Action Conference on Saturday, Wheeler bashed the Green New Deal resolution from Sen. Ed Markey (D-Mass.) and Rep. Alexandria Ocasio-Cortez (D-N.Y.).

"When I looked at it, I thought it was not ready for prime time," the EPA chief said of the progressive climate resolution. "There wasn’t enough detail or explanation; there was a lot of contradictory things."

Wheeler appeared to be conflating the actual text of the Green New Deal resolution with an erroneous fact sheet that was initially circulated by Ocasio-Cortez’s office and was later withdrawn.

The fact sheet called for getting rid of "farting cows" and stressed the need to "build out high-speed rail at a scale where air travel stops becoming necessary." But the resolution took a more scaled-back approach (Climatewire, Feb. 12).

Wheeler also granted an interview to The Daily Caller at CPAC, saying the Green New Deal would sink the U.S. economy.

"If you look at their deal, it would shut down the U.S. economy, so that would reduce CO2 emissions, but I don’t think that’s what most Americans want," he said.

Wheeler also gave an interview to The Daily Signal yesterday in which he praised President Trump’s "energy dominance" agenda.

Despite speaking to four conservative news outlets, Wheeler has not granted an interview to any mainstream outlets since his confirmation.

He added, "Again, all reporters from all different outlets, regardless of bent or ideology, should have access to the EPA administrator. And on that note, I invite him to come and speak at SEJ this year if that’s possible."