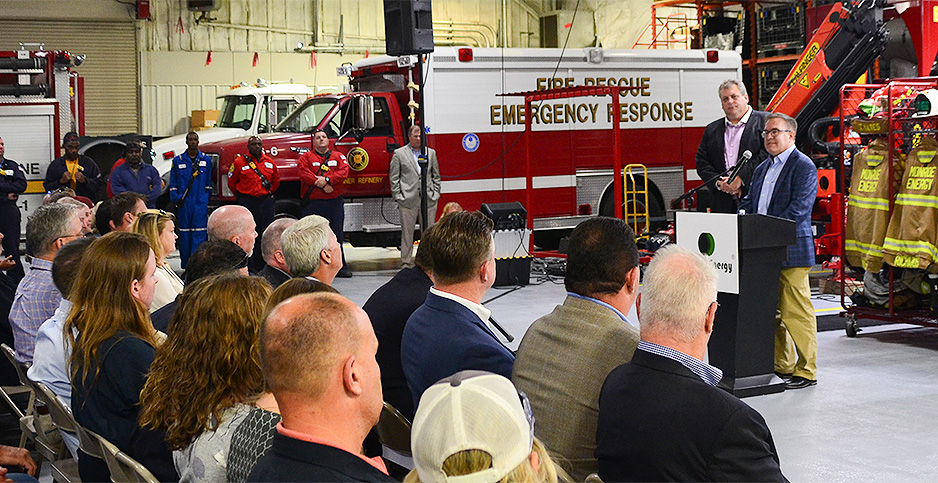 "We know that we can expand energy production, grow the economy and protect environment. At the same time," the EPA chief said at a Monroe Energy LLC refinery.

Wheeler chose a curious venue to make that claim: Monroe has paid over $650,000 in fines during the past five years due to alleged air pollution violations at the Trainer refinery.

Asked about why he elected to talk about how EPA can protect clean air while rolling back environmental regulations at a facility accused of violating them, Wheeler said, "I don’t want to get into any enforcement discussions — and I did not with the leadership of the refinery here.

"But they have a good story to tell," he told reporters after the event, which was organized by Pennsylvania Republican Sen. Pat Toomey and included details about upcoming regulatory rollbacks (E&E News PM, July 29).

"They’ve made a lot of advancements here over the last few years," Wheeler said of Monroe’s Trainer refinery. "They were giving me a tour of the facility, and I learned quite a bit about what they’ve done and what they’re doing and what more needs to be done."

Monroe was created by Delta Air Lines in 2012 when it bought the century-old refinery along the Delaware River about 10 miles southwest of Philadelphia. The company says the facility can produce 185,000 barrels per day and is optimized for jet fuel production.

EPA’s online enforcement database lists the Trainer refinery as having a "high priority violation" under the Clean Air Act. The facility was out of Clean Air compliance for 11 of the last 12 quarters. It has had 20 informal and eight formal enforcement actions in the last five years. Since 2014, it has accumulated $651,423 in fines.

Water and solid waste inspections conducted this year at the refinery found no violations.

State officials in Pennsylvania carried out most of the inspections at the facility. But in 2016, EPA found refinery officials failed to submit accident history information within six months for two releases that occurred in November 2012 and on March 20, 2014. Monroe paid EPA a $2,000 fine.

Monroe’s pipeline subsidiary paid a $109,000 fine to the Pipeline and Hazardous Materials Safety Administration in connection with problems federal inspectors identified with the firm’s handling of inspections and repairs.

In addition, PHMSA is seeking a $52,000 penalty from Monroe after the company couldn’t provide records of tank repairs to federal inspectors. The repairs were recommended by an internal company inspection. The company contested the violations, and the case remains open.

Monroe didn’t respond to messages about the violations.

The PES refinery is now shutting down and laying off 640 workers. Monroe has posted openings for 20 of them, Ryan O’Callaghan, the president of the United Steelworkers Local 10-1, told reporters after the Trainer event.