Wheeler promised a lead and copper rule. Where is it? 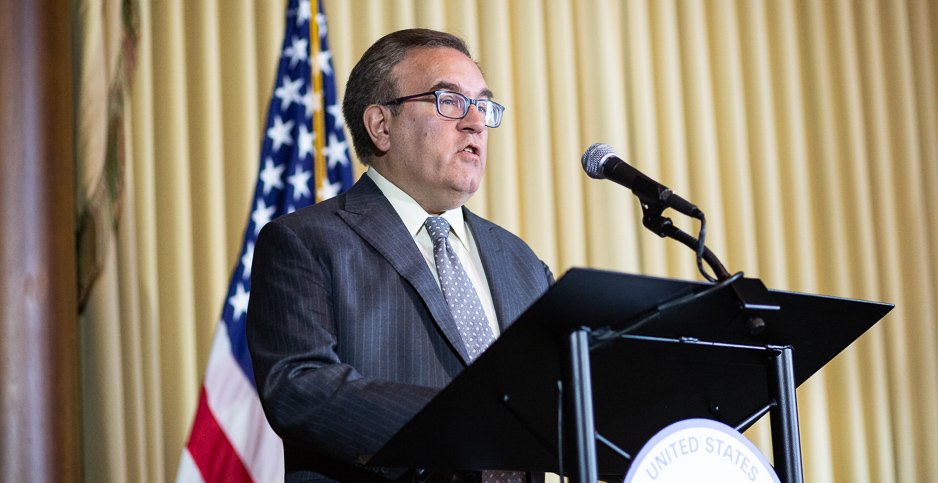 EPA Administrator Andrew Wheeler has been promising a major rulemaking to update the nation’s decades-old rules for lead and copper in drinking water, saying in September that it would be unveiled within weeks.

During a speech at the conservative think tank American Enterprise Institute, Wheeler said the rule, for the "first time ever, will call for the testing of lead in all schools and day care centers."

A few months later, that regulation has yet to emerge.

The agency’s proposed final Lead and Copper Rule is still under review at the White House, with onlookers quietly speculating the rule might be dead.

The holdup may be the result of pushback from within the Trump administration. According to The Washington Post, sources who spoke on the condition of anonymity said chief of staff Mark Meadows and other White House officials have questioned a rule that would result in the replacement of lead and copper pipelines across the country.

Those same sources have said Wheeler is pushing to finalize the rule as he burnishes his legacy at EPA.

The White House review at the Office of Management and Budget is a notorious "black box" where rules move through at varying paces without explanation. Some say there’s a pattern of the agency moving through rollbacks quickly but taking longer to process protective measures.

"We’ve seen [the Office of Information and Regulatory Affairs] move faster on what are clearly EPA political priorities that involve rolling back environmental protections," said Amit Narang, regulatory policy advocate at Public Citizen. "When it comes to putting in new protections to things like lead and PFAS, it seems like these reviews are longer."

Narang noted that EPA’s final Lead and Copper Rule has been at OIRA since July 31, and the agency’s notice for interim guidance on PFAS waste disposal and destruction since July 27.

He compared that with a review of air pollution standards for fine particulate matter, which took about a month (Greenwire, Dec. 7). And the 2018 "secret science" proposal flew through OIRA review in just four days (E&E News PM, May 9, 2018).

Yet EPA maintains that the final Lead and Copper Rule is forthcoming.

Kurt Thiede, administrator of EPA Region 5, which includes Michigan, said yesterday during an online conference that the Trump administration hopes to complete the updated version of federal lead and copper regulations in the next month.

Among other changes, they will require testing at all schools and day care facilities, as well as publicly accessible lead service line inventories for all water systems, said Thiede.

And although EPA didn’t immediately respond when asked about the fate of the Lead and Copper Rule, EPA spokesman James Hewitt last week defended the Trump administration’s tenure and said an updated version of the regulation is close to being finalized (Greenwire, Dec. 2).

"My guess is that this is a hot potato they want to pass to [President-elect Joe] Biden," said James Goodwin, an analyst at the Center for Progressive Reform. "My guess is that Biden sends it back to EPA to rework. Hopefully for the better because this could be a critical part of his environmental justice agenda."

What will Biden do?

The timing of a final Lead and Copper Rule may determine how the incoming Biden administration builds on the measure — or scraps it.

Stuart Shapiro, a former regulatory analyst at the Office of Management and Budget in the Clinton and George W. Bush administrations, said OMB is theoretically supposed to ask for an extension if a rule is under review for more than 90 days.

And it’s not uncommon for that to happen, he said, if OIRA is stuck at some kind of loggerheads or if negotiations are ongoing and the administration wants to release the final rule at a particular time. Some rules may be stuck for up to 120 days.

Shapiro said it’s possible OIRA is waiting to release a final Lead and Copper Rule at a strategic time or that the agency may not agree with a section of the proposal. Another possibility is that the agency is simply overwhelmed with pushing through regulations as the Trump administration nears the transition, he said.

OIRA is currently working on EPA’s final "secret science" rule, a regulation that sources say could limit which research scientists can use to better understand the effects of water pollution on humans, as well as a plan for ozone standards.

The interagency review, said Shapiro, is a negotiation between OMB and EPA, wherein the White House communicates with agency officials at the civil service level or an EPA point person, who may be EPA Assistant Administrator for the Office of Water David Ross in this case.

If issues cannot be resolved, they may go up the chain and ultimately involve the head of EPA or OIRA. But EPA, he added, doesn’t have a big incentive to push OMB for a final decision.

"At the end of the day, maybe OIRA will just reject the rule, and [EPA doesn’t] want that to happen," he said.

If the rule isn’t cleared by Jan. 20, said Shapiro, it will get sent back to EPA with other unfinished business, and the incoming Biden administration would start from scratch.

Narang said that even if the rule, which is considered major and economically significant, is finalized and published in the Federal Register, it would still take 60 days to take effect legally.

If the Biden administration issues a memo upon taking office and freezes anything pending, the Lead and Copper Rule could be included in that freeze.

"It could block the rule from taking effect, and then they could [more quickly] revisit and redo the rule," he said.

Goodwin suggested Biden may build off the Trump rule.

"Given how hard it is for EPA to start a rule from scratch, the smart move would be to see if the proposal could be salvaged in some way," he said.