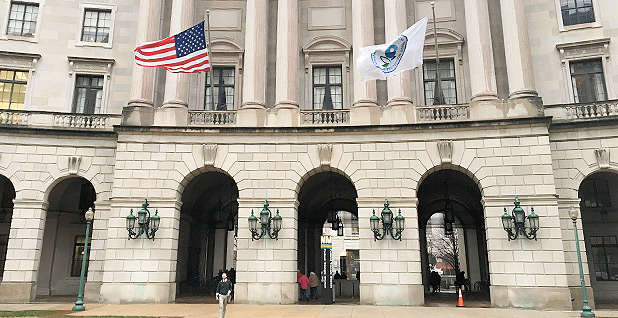 Acting EPA chief Andrew Wheeler has put Scott Pruitt’s plan to restrict the science used in crafting new regulations on the back burner.

The draft rule issued when Pruitt was EPA administrator — titled "Strengthening Transparency in Regulatory Science" — was listed under "long-term actions" in the administration’s fall 2018 regulatory plan released last night, with an expected completion date of January 2020.

In regulatory parlance, that means the proposal is not a top agency priority at the moment.

The draft rule — touted by supporters as an effort to scrap "secret science" from regulations — was unveiled by Pruitt last April. Pruitt resigned in July under a crush of ethics allegations, and acting EPA Administrator Wheeler suggested he planned to scrutinize the contentious proposal.

The draft rule would effectively bar EPA from using specific studies for developing new regulations unless the underlying data "are publicly available in a manner sufficient for independent validation," according to the text. Critics of Pruitt’s plan view it as an effort to stop EPA from using research that could justify the need for tighter regulations.

Regulatory policy experts cautioned against reading too much into the move to long-term actions, since the regulatory plan is nonbinding. Still, they said the move could signal that Wheeler is retreating from one of Pruitt’s more controversial — and legally vulnerable — actions.

"I think, first and foremost, I urge caution in terms of reading too much into this," said Yogin Kothari of the Union of Concerned Scientists. "But I think it’s an admission that they don’t think it’s ready for prime time."

He added, "They were trying to rush it earlier this summer and trying to get it out of the door. Moving it to the long term shows that the new political leadership at EPA is taking a longer, harder look at it. And it appears not to be a priority at this time."

Paul Billings, senior vice president for public policy at the American Lung Association, similarly said, "I would caution reading too much into any of this stuff."

"I think it’s a sign that there’s not a great sense of urgency around this. But it’s still on the agenda," Billings added. "It would be far better for them to say that they are withdrawing the rule, or that they’re not going to move forward with it. That would be a much more definitive and useful statement."

Asked whether the "secret science" plan is an agency priority, EPA spokesman Michael Abboud said in an email to E&E News, "Long-term actions are those under development, but for which the Agency does not expect to publish an action within the next 12 months. However, the Agency may advance rules on a faster timeline."

Abboud added: "This is not a delay. The Agency is continuing its internal rulemaking development process for this action. The Spring agenda gave no deadline on a final rule."

In unveiling the draft rule in April, Pruitt framed it as a good-government measure that would shed more daylight on the agency’s decisionmaking.

Just after taking the helm at EPA in July, Wheeler signaled in an interview with E&E News that he intended to pursue the draft rule (E&E News PM, July 13).

"That was proposed before I got here. I’m going to take a hard look at it," Wheeler said. "But I cut my teeth at the agency working on the Community Right-to-Know Act, and I really fundamentally believe the more information we put out to the public as far as what we’re basing our regulations on, the better our regulations will be."

At a hearing earlier this month, the Senate Environment and Public Works Committee appeared split on the proposal (E&E Daily, Oct. 4).

Sen. Mike Rounds (R-S.D.) lent his support to the idea, saying, "I have been concerned that the broad discretion and lack of transparency at the EPA had led the agency to seek out the science that supports a predetermined policy outcome."

Senate Democrats, meanwhile, frame the EPA plan as part of a broader pattern of "regulatory capture" by industries the agency is charged with overseeing (Greenwire, Aug. 17).

The draft rule has its origins in legislation championed by House Science, Space and Technology Chairman Lamar Smith (R-Texas). While various versions of Smith’s bill have cleared the House, they have then stalled in the Senate.

The move to long-term actions comes after the departure last month of Richard Yamada, a quiet force behind Pruitt’s efforts to curtail the use of science (Greenwire, Sept. 14).

Yamada served as the top political aide in EPA’s research office, where he worked on several of the agency’s more controversial moves under the Trump administration, including Pruitt’s now-defunct "red team, blue team" exercise to debate climate science.

Yamada was also a bridge between EPA and Smith, having previously served as a congressional staffer for the House Science Committee, where he worked on several of Smith’s science reform ideas.