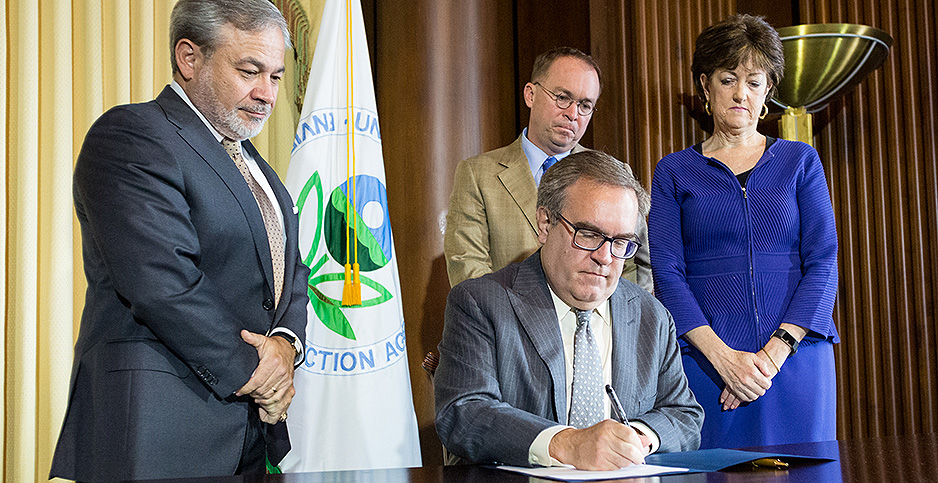 The Trump administration is celebrating its replacement for the Clean Power Plan today as EPA offers a narrow path for power plants to cut greenhouse gas emissions.

Coal miners, members of Congress and leaders of conservative think tanks joined EPA officials at agency headquarters this morning for the rollout of the long-awaited Affordable Clean Energy rule.

The climate rule does not cap greenhouse gas emissions from power plants, leaving it up to states to pick from a menu of technologies to improve power plant efficiency at the facility level.

EPA estimates that once the final rule is fully implemented, it will lead to a 10 million-ton reduction in CO2 emissions and will provide net benefits of $70 million to $100 million — or possibly higher — each year.

"Unlike the CPP, the ACE rule adheres to the four corners of the Clean Air Act," he said.

The release of the final rule comes as the Trump administration has sought to offer support to the coal industry, and after years of lobbying by industry groups and conservatives to pare back the scope of the Obama administration’s rulemaking.

The new climate rule limits "the best system of emissions reductions" to what can be achieved at the facility level and takes several possible approaches to slashing emissions off the table as means of compliance.

The proposal no longer includes changes to the New Source Review program. The agency had said the permitting program needed reform to prevent added costs to power plant operators complying with ACE.

"We’re not finalizing that today, we fully intend to finalize the NSR fix, but frankly with everything we have in the final rule, we’ve bitten off as much as we can chew," the official said, adding that EPA plans to release changes to NSR in the next few months.

The rule’s narrow focus excludes a number of options for compliance.

Under the final rule, states cannot use carbon capture and storage technology or fuel switching from coal to a less high-emitting option to comply.

The senior official told reporters in a background briefing ahead of the rule’s release that CCS was not considered a "best system of emissions reduction" because it was not technologically feasible or cost-effective. The agency rejected the use of fuel switching as an option because it would exceed the agency’s authority under the Clean Air Act to require plants to take that type of action.

Similarly, emissions trading, either between facilities or within facilities themselves, will also not be allowed.

The official clarified that states can still enact their own laws requiring these approaches, and facilities can adopt them voluntarily.

Agency officials noted that EPA’s own analysis found that most states are already on track to meet the emissions reductions targets laid out in the Clean Power Plan, meaning there was very little difference between a scenario with the Obama-era rule and one without it.

"The market has taken care of it. The Clean Power Plan would have ended up causing specific closures at specific plants, regardless of what the marketplace would have done," Wheeler said.

The rule is also making changes to the framework regulations governing how EPA administers the part of the Clean Air Act the rule is written under, Section 111. The senior administration official said the agency would revise the regulations to more clearly state that the agency’s role under the Clean Air Act section is to identify the best technology for pollution controls. It is up to states to develop standards that EPA would then review and approve.

The administration official in the briefing said the Clean Power Plan revealed a "fundamental problem" with framework regulations.

These changes include extending the deadlines for states to provide plans for implementing the rule. States now have three years to submit plans to the agency, and EPA has a year to review them.

Given the length of time before states submit plans, EPA does not expect cutting NSR reforms from the rule to have an effect on states’ plans, saying a fix should be out in the coming months.

The EPA administrator said the agency is expecting lawsuits over the new rule.

"I think everything we do, we’re going to be sued," he said. "I do expect some litigation, but I also expect us to prevail in the courts. We pay very close attention to past court precedent. We’re following the Clean Air Act."

Office of Management and Budget Director Mick Mulvaney called the rule a top priority for President Trump, noting how the president had talked about the rule on the campaign trail.

"This is another example of the president doing exactly what he said he would do when he ran for office," said Mulvaney.

"This rule regulates carbon emissions at our nation’s power plants in a way that’s consistent with the structure and the intent of the Clean Air Act. In other words, we’re following the law as we continue to improve the quality of our air," said Deputy Energy Secretary Dan Brouillette.

The ACE rule is already causing Democratic heartburn on Capitol Hill, where Senate Minority Leader Chuck Schumer (D-N.Y.) and members of the Environment and Public Works Committee will make their case at a news conference this afternoon.

When the Trump administration rolled out the draft plan last year, Democrats used a similar event to float the idea of using the Congressional Review Act to undo the final rule, and many have again pledged to do anything in their power to halt it.

The CRA allows Congress 60 legislative days to overturn federal regulations, though neither the House nor the Senate would have enough votes to override a veto from Trump, meaning it would be a largely symbolic effort.

Democrats said yesterday that’s still on the table as a messaging move, but several acknowledged the more realistic path to overturning the rule would be through the courts.

"It’s definitely going to get challenged in court, and I would expect it to be on really shaky ground," Rep. Jared Huffman (D-Calif.) told reporters yesterday. "From what I saw, their attempts to justify this were tortured and, I am sure, legally vulnerable."

Rep. Alexandria Ocasio-Cortez (D-N.Y.) added that a symbolic CRA challenge might be a lackluster response compared with attempting to legislate on climate change or use the appropriations process to block the rule.

"Whether there’s value in it I think is kind of a political determination," she told reporters yesterday. "I think that passing a resolution on something so technical in scope may not have the messaging impact that people tend to reserve for resolutions, but I think it’s important that we have a response and action."

Instead, Democrats are stressing the climate-related provisions in the House appropriations bills, which they say will help force the administration’s hand to do something more aggressive about climate change.

"The appropriations package is very extensive. That is where we have leverage," Select Committee on the Climate Crisis Chairwoman Kathy Castor (D-Fla.) said this morning. "We will continue pressing for bold action moving forward."

On the other side, Republicans offered their praise for the ACE rule, but Sen. Kevin Cramer (R-N.D.) said he’s worrying about the potential legal vulnerabilities, with environmental groups likely to mount lawsuits.

At the same time, Cramer said he wasn’t especially interested in revamping EPA’s endangerment finding, the 2009 ruling that greenhouse gases are a threat to public health, which underpins both ACE and the original Clean Power Plan.

"Clearly, people want us to deal with greenhouse gas emissions, or at least deal with climate change in meaningful ways," Cramer told E&E News this morning. "We have to do that within the confines of the Constitution and the law, but I’m not as hung up on the endangerment finding being challenged as I am getting this right."

Still, Cramer and other Republicans praised the return to "federalism." Senate Majority Leader Mitch McConnell (R-Ky.) used a floor speech this morning to rail against the Clean Power Plan and hail a return to the "rule of law" with the Trump administration’s greenhouse gas regulation.

"Just one more win for all Americans who live and work in communities where affordable, homegrown American energy sources like coal still matter a great deal," he said.

GOP industry allies also spent the morning offering their support for the ACE rule. They include the U.S. Chamber of Commerce, which has shifted its rhetoric in recent months to acknowledge and call for action on climate change.

"Inaction on climate change is not an option, and policies to address it must be practical, flexible, predictable and durable," Christopher Guith, acting president of the Chamber’s Global Energy Institute, said in a statement. "If consistent with these criteria, the ACE rule represents an important step by the Administration, working with states, and the private sector to lower greenhouse gas emissions."

Meanwhile, environmental groups are already threatening to sue, while some of their allies on Capitol Hill are starting to make a case that the ACE rule isn’t better than nothing.

Huffman called it "a big old backward step," while Rhea Suh, president of the Natural Resources Defense Council, said it would "give polluters free rein and doom future generations."

"That’s an approach America can ill afford — and we’ll go to court to stop it," Suh said in a statement.