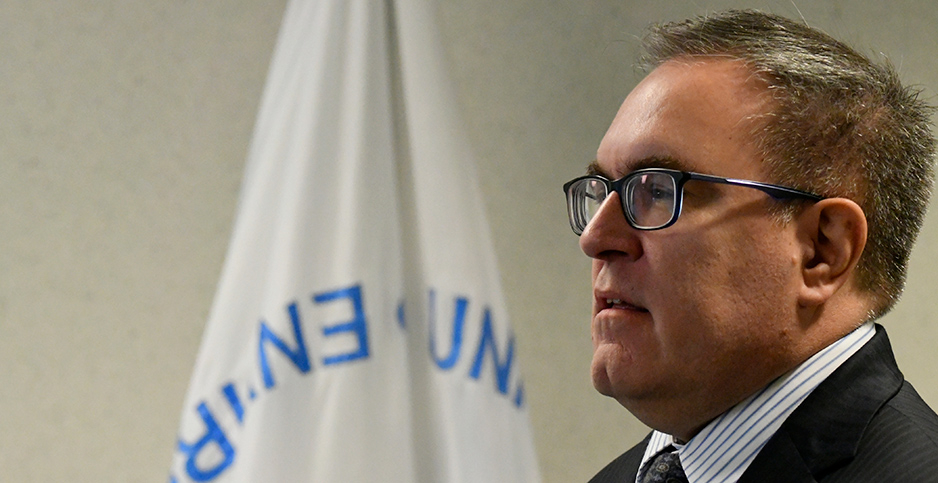 The event at the General Services Administration was closed to the press, and an E&E News reporter was barred from the room and later escorted from the building.

Wheeler was slated to talk about streamlining the permitting process for complex projects, according to an event invitation obtained by E&E News.

Other featured speakers included R.D. James, assistant secretary of the Army for civil works, and Alex Herrgott, executive director of the Federal Permitting Improvement Steering Council, according to the invitation.

Sen. Rob Portman (R-Ohio), chairman of the Homeland Security and Governmental Affairs Permanent Subcommittee on Investigations, also delivered opening remarks, according to an updated agenda provided to E&E News by an attendee.

The event was billed as the Federal Permitting Improvement Steering Council’s first "Stakeholder Engagement Forum." The council is tasked with improving interagency consultation and coordination on complex infrastructure projects.

President Trump tapped Herrgott as executive director of the council in September 2018. The executive director role was created as part of the Fixing America’s Surface Transportation Act (FAST-41), which President Obama signed into law in 2015 (E&E News PM, Sept. 21, 2018).

The invitation described the event as a "unique opportunity to hear high-level government decision-makers share how they can help create a tailored and predictable roadmap for the infrastructure permitting process."

It added that "industry leaders will also be on hand to discuss how the Permitting Council’s assistance successfully brings clarity to the process that stakeholders can rely on."

The invitation did not mention that the event was closed-press. But an E&E News reporter was denied entry to the auditorium in the General Services Administration where the event took place.

Matthew Burrell, a press assistant with GSA, later escorted the E&E News reporter out of the building. Burrell said questions about the event could be directed to GSA’s press office.

In response to an emailed list of questions, GSA press secretary Pamela Pennington said, "This was a stakeholder-only event put on by the Federal Improvement Permitting Steering Council. This event was always a closed media event and there were signs posted that it was closed media as well. Also there was a required registration date that had to be adhered to."

Pennington didn’t respond to a follow-up inquiry seeking a list of industry attendees and a recording of the discussion.

Scott Slesinger, legislative director at the Natural Resources Defense Council and an expert on project permitting, was one of a few environmentalists invited to the event.

Environmentalists and progressives have expressed concern that the Trump administration’s efforts to speed up project approvals should not undermine environmental protections or bedrock laws such as the National Environmental Policy Act.

Slesinger told E&E News after the event that Herrgott primarily focused on outlining the permitting process for states and project sponsors.

"It was mostly how they work, how they plan to work, how they do things," Slesinger said in an interview. "Alex made a good point that these things of coordinating, having agencies talk to each other, should not have needed a statute anyway. That should have just been the way things were."

He added, "Frankly, I didn’t hear anything that should have been kept from the press. And it may have been helpful to publicize."

Several officials from the White House Council on Environmental Quality were sitting in the front row, Slesinger confirmed. CEQ is currently drafting guidance on how to consider greenhouse gas emissions under NEPA after the Trump administration rescinded Obama-era guidance on the subject (Greenwire, Feb. 8).

Wheeler said in a tweet after the event, "At the Federal Permitting Improvement Steering Council this morning I explained that many infrastructure projects are critical to environmental protection. President Trump @POTUS understands the importance of infrastructure for both the economy and the environment."