Wheeler to face lawmakers in first hearing as agency chief 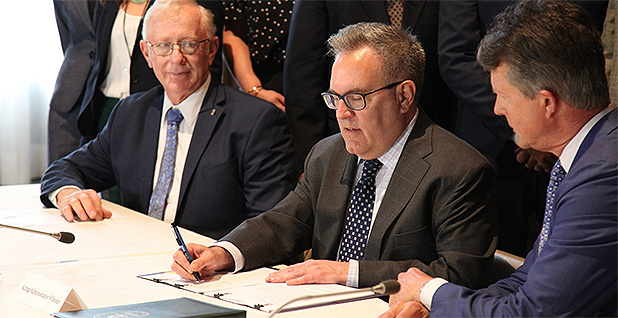 Andrew Wheeler will be on Capitol Hill on Wednesday for his first congressional hearing as acting EPA administrator.

The Senate Environment and Public Works Committee is well-trodden ground for Wheeler, who took the reins of EPA earlier this month after Scott Pruitt stepped down under heavy scrutiny for allegations of exorbitant spending and mismanagement.

Wheeler previously served as the committee’s staff director and is familiar to several of its senators, including Sen. Jim Inhofe (R-Okla.).

The committee also approved Wheeler’s nomination as deputy EPA administrator before the full Senate confirmed him this April.

Pruitt was slated to appear before EPW at some point in August to discuss his various ethics scandals. But with his resignation, Wheeler is more likely to face questions about what EPA is doing regarding policy under the Trump administration.

Sen. Tom Carper (D-Del.), EPW’s ranking member, said the "ongoing discussion" about the long-anticipated rollback of Obama-era clean car rules will be a focal point of the hearing. A announcement could come as soon as this week.

EPA and the National Highway Traffic Safety Administration are expected to propose freezing fuel economy targets at 2020 levels through 2026, rather than maintaining the year-over-year increases that automakers agreed to under the Obama administration.

Carper last week warned against doing anything "foolish," adding that he hopes Wheeler and EPA can come to an agreement with California and 13 other states with more stringent tailpipe rules under a Clean Air Act waiver (Greenwire, July 25).

"He and I have talked about it several times," Carper said. "And this will be a primary issue for us to discuss, I’m sure, at that hearing."

Farm-state Republicans who sit on the committee have been troublesome for President Trump’s EPA. Several of them were angered by Pruitt’s moves on the renewable fuel standard, including giving waivers to oil refiners from the biofuel mandate.

Bill Wehrum’s nomination stalled at the committee due to those concerns before he was eventually confirmed as assistant administrator for EPA’s Office of Air and Radiation.

Wheeler has been thrust in the center of the RFS debate. He is trying to find a compromise deal among various energy interests that have roiled the Trump administration.

"At this point, we’re not going to implement any section of that package, but I’m looking, and I’m talking to the ethanol people, I’m talking to the oil people, to all the stakeholders, trying to figure out if we can put together a new package to move forward," Wheeler told reporters last week (E&E News PM, July 26).

"I think we can make everybody happy," said the acting administrator, "and we’re certainly working toward that."

Democrats will most certainly also quiz Wheeler over other regulatory actions by EPA. The agency, for example, is working on a replacement of the Clean Power Plan, the Obama-era rule designed to curb power plants’ carbon emissions.

Wheeler, however, has already pulled back on an EPA non-enforcement order for glider kits — new truck cabs equipped with refurbished diesel engines — that Pruitt issued on his last day in office (Greenwire, July 27).

Another contentious Pruitt proposal still causing heartburn on the Hill would require EPA to use only publicly available data to formulate the agency’s regulations and ban "secret science." Critics countered the rule would stop EPA from using confidential health information that has helped support to combat pollution and other toxic hazards.

Pruitt’s move to bar EPA grant recipients from serving on the agency’s advisory boards has similarly attracted controversy. Carper and Sen. Sheldon Whitehouse (D-R.I.), another EPW member, pushed for an investigation into the matter, which has come under review by the Government Accountability Office.