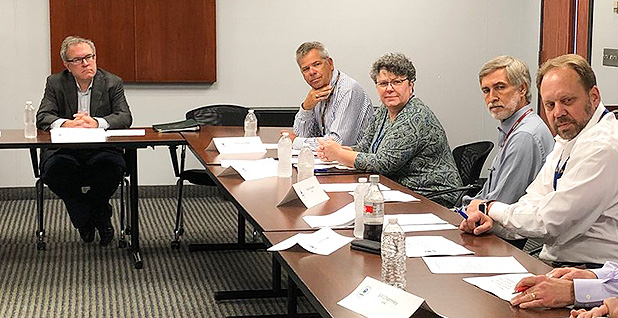 Acting EPA Administrator Andrew Wheeler’s private calendar shows a range of industry interests were scheduled to meet with him during his early months as deputy chief at the agency.

The schedule, obtained by E&E News under the Freedom of Information Act, offers more detail than his public calendar posted on EPA’s website about who met with Wheeler and what they discussed while he served as second in command.

The 330-page document starts at April 20, when Wheeler was sworn in at EPA, and ends at July 6, which was former Administrator Scott Pruitt’s last day at the agency after he resigned under a crush of ethics allegations.

On the morning of June 5, Wheeler had a meeting about emissions regulations for heavy-polluting glider kits — new truck cabs with refurbished diesel engines — that the Obama EPA had sought to limit.

"Hi, Andrew, I’d like to request a meeting for next week," Milloy said.

Wheeler’s public calendar for that day is less informative. The time slot from 11 to 11:30 a.m., when he met with Milloy and Toomey, says only that he was in a "General Discussion."

Milloy, who has advocated for keeping glider kits on the market, confirmed in a brief phone interview this afternoon that glider kits were a focus of that meeting.

"I was helping out as a friend," Milloy told E&E News when asked about his connection to Fitzgerald. "It was pro bono work."

The following month, on Pruitt’s last day, the agency said it wouldn’t enforce a production cap on the high-emission trucks. Wheeler has since withdrawn that order, but EPA is moving forward with a proposed repeal of the glider kit rule (E&E News PM, July 18).

Wheeler’s calendar while he was EPA’s No. 2 show he was slated to meet with a number of lobbyists and trade group officials with business before the agency.

On June 14, Wheeler was scheduled to meet with two well-known Clean Air Act attorneys, Bill Brownell and Joe Stanko of Hunton Andrews Kurth, for a "Meet and Greet."

Brownell was among the attorneys who argued in a federal appeals court that the Obama administration’s Clean Power Plan should be overturned.

Before he became EPA’s acting chief, Wheeler was scheduled for several meetings with staff throughout the agency. He also had time slated to connect with other Trump administration officials, including Francis Brooke, the White House energy adviser.

It wasn’t all industry meetings for Wheeler. Some environmental groups made it onto the agenda.

Wheeler was also scheduled for a "Meet and Greet" with Collin O’Mara, president and CEO of the National Wildlife Federation, on June 21. In addition, he was slated to attend a Chesapeake Bay Commission meeting on May 3.

"Administrator Wheeler is open to meeting with all stakeholders," Hewitt said.

Wheeler also had meetings about the renewable fuel standard, including with organizations that had previously paid for his lobbying or consulting work.

But his personal calendar shows more information on those meetings and reveals further contacts with past clients. EPA has defended the meetings, saying since Wheeler didn’t work with those clients during the two years prior to his joining the agency, he is allowed to meet with them and remain in line with President Trump’s ethics pledge (E&E News PM, July 27).

The previously reported May 24 meeting with ADM and two other biofuel groups was "regarding the current negotiations on the year round E-15 and RIN credits for ethanol exports deal," according to the calendar.

May also appears to have included two other scheduled biofuels-related meetings. One was to feature the head of the Renewable Fuels Association trade group. Another was scheduled with Frank Love, the CEO of Love’s Travel Stops, to talk about how his 450 truck stops have made "considerable investment in biodiesel and renewable natural gas covered by the Renewable Fuel Standard," according to the personal calendar.

ADM had additional meetings slated with Wheeler, the calendar shows. On June 26, an executive from the agribusiness giant was slated to meet with the then-deputy administrator to "discuss the timing/importance of the 2019 renewable volume obligations." That meeting was to include the head of trade group Growth Energy, another former client.

Later that day, Wheeler had a previously reported meeting with former client Darling Ingredients about the "biomass-based diesel requirements under the Renewable Fuels Standard." The calendar says it included a top Darling official and Andy Ehrlich, a lobbyist at the firm Total Spectrum who previously represented Darling at Faegre Baker Daniels alongside Wheeler.

On June 15, Wheeler and his colleagues were asked to attend a nomination "mock hearing," in which Trump’s political appointees would play members of the Senate Environment and Public Works Committee, according to the calendar.

A notice sent to Wheeler and other top EPA staffers stipulated which agency officials would be playing which senators for the 90-minute session. The only Republican represented was to be committee Chairman John Barrasso of Wyoming. He was to be played by Christian Palich, who was president of the Ohio Coal Association before joining EPA’s congressional affairs staff.

It’s unclear whether the mock hearing took place and which nominees, if any, it was intended to benefit.

EPA’s press office didn’t respond to a request for comment about the June 15 meeting.