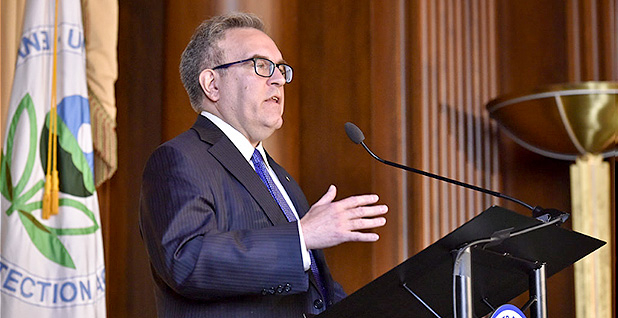 When acting EPA Administrator Andrew Wheeler laid out the need for more certainty to agency employees in a get-acquainted speech Wednesday, his top priority might have come as a surprise: risk communication.

"Risk communication goes to the heart of EPA’s mission of protecting public health and the environment," he said. "We must be able to speak with one voice and clearly explain to the American people the relevant environmental and health risks that they face, that their families face and that their children face."

Easier said than done, according to people familiar with the mechanics of what’s described on an EPA website as "the process of informing people about potential hazards to their person, property or community."

Not only do politics and genuine uncertainty pose barriers to providing accurate information, but government leaders may have to contend with a clamor of competing voices on the internet.

The ensuing scandal led to criminal charges against state and local officials in Michigan, and it cost EPA’s then-regional administrator her job. On Wednesday, Wheeler called the episode "the poster child for our need to improve risk communication."

Even though Flint’s water has been meeting federal "lead action levels" for almost two years now, a mantra persists that it’s still too dangerous to drink, Edwards and a colleague wrote in a blog post last week.

While the city still has very real problems, "the on-going conspiracy theories, misinformation and fearmongering make it virtually impossible to constructively address those problems," they added.

Wheeler promised Wednesday to assemble a working group to look at risk communication across EPA. By giving added certainty to the public and the "regulated community," he said, "we can dramatically enhance environmental protections and give the private sector the clarity and transparency it needs to grow and create more jobs."

Exactly what Wheeler means, however, is open to dramatically different interpretations.

Steve Milloy, a Trump administration ally and author of the book "Scare Pollution: Why and How To Fix the EPA," saw it as evidence Wheeler will pursue a contentious proposal to limit the types of studies the agency can use in drafting new regulations to those in which the underlying data are publicly available for "independent validation." Supporters describe the plan as a way to bolster confidence in EPA rulemaking, while critics view it as a strategy to exclude important research.

Milloy once worked for Murray Energy Corp., the Ohio-based coal giant that is a strident critic of EPA regulations. Wheeler lobbied for the company for years.

"Andrew was on the front lines of how the coal industry got railroaded" with "junk science," Milloy said.

But to Frank O’Donnell, president of the nonprofit Clean Air Watch, Wheeler’s words smacked of a public relations drill.

"It sounds as if he was boasting that he’s had advanced spinning classes — just not the type of spinning involving bicycles," O’Donnell said in an email.

There’s no question EPA has at times fumbled the job of explaining the environmental dangers stemming from specific disasters.

On Wednesday, Wheeler alluded to the agency’s handling of air quality concerns in lower Manhattan after terrorists destroyed the World Trade Center on Sept. 11, 2001.

Only a week after the attack, EPA pronounced the air safe to breathe, even though agency officials lacked the data to make "such a blanket statement," the agency’s inspector general concluded in a lengthy 2003 review.

Another report later released by Rep. Carolyn Maloney (D-N.Y.) blamed "a cocktail of toxins" released in the Trade Center’s collapse for sickening thousands of first responders, nearby residents and others.

What EPA needs to do after a similarly large incident, Wheeler said, is to ensure that people understand "the risk that they face." And when information changes, he added, "we need to go back to those same people and explain to them what changed and why it changed, and what the new information means to them."

"That’s a wonderful quote that I just don’t believe," Thomas Cahill, a retired professor of physics and atmospheric sciences, said in an interview this morning.

Cahill, based at the University of California, Davis, worked on air quality issues after the 9/11 attacks as a volunteer researcher. He recalls EPA’s performance in communicating risk as "dreadful."

One reason, Cahill said, was EPA had to clear statements for public release through the White House.

"As long as you have someone like the president who wants to minimize the dangers" presented by a damaging event, Cahill said, "you’re going to have interference with the information being presented."

Sometimes, however, just a study can set off alarms. Early this year, a White House staffer warned of a "potential public relations nightmare" presented by a draft toxicology profile of per- and polyfluoroalkyl substances, or PFAS.

But that 15 ppb standard is tied not to health risks, but to the ability of corrosion control treatments to reduce lead levels at the tap. At a Senate hearing earlier this year, then-EPA Administrator Scott Pruitt said he believed that no level was safe and that lead should be eliminated from drinking water (Greenwire, Feb. 7).

But while a federal strategy was supposed to be finalized by last month, EPA now isn’t saying when exactly it will come out.

"EPA and our federal partners are engaged in a national campaign to end childhood lead exposure," an agency spokeswoman said yesterday in response to a question from E&E News. "We are all committed to addressing this threat and improving health outcomes for our nation’s most vulnerable citizens — our children."