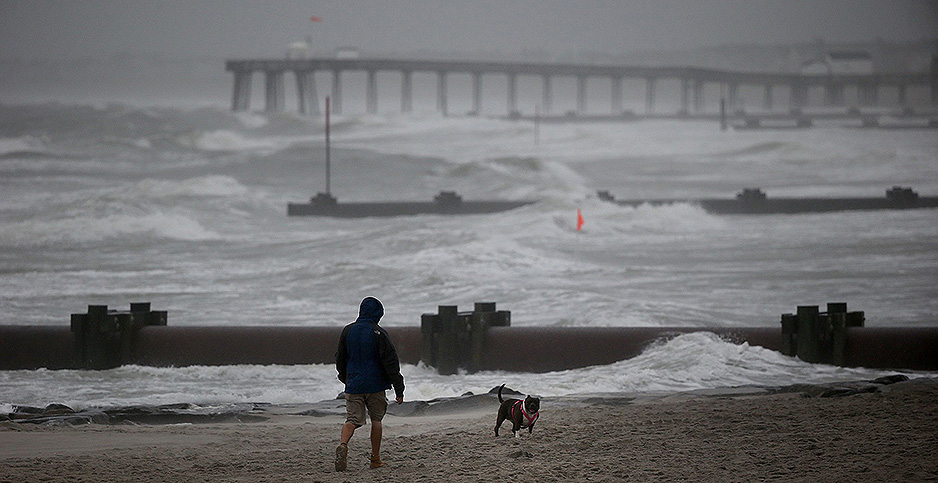 The last time a major hurricane hit Florida, Marci Lowman hunkered down with her two daughters in their Miami Shores house.

Lowman came to regret the decision as Hurricane Irma created a mess in September 2017. Next time, she vowed, they would evacuate.

But now with COVID-19 infecting nearly 5 million people in the United States, including more than 500,000 in Florida, Lowman said she "can’t imagine trying to evacuate my family."

"It would have to be a terrible storm to do that," Lowman said.

Many southeastern U.S. residents have a similar fear of evacuating during the pandemic, raising concerns that a major hurricane could trap thousands of people in perilous flooding, cause large-scale deaths and force potentially dangerous rescues.

"I worry that there will be more chaos than usual if we get a really big disaster," said University of North Carolina, Chapel Hill, anthropologist Caela O’Connell, who has studied hurricane evacuations.

In a survey of Florida and North Carolina residents by AAA in late May, nearly 40% of the respondents said their fear of contracting COVID-19 makes them less likely to evacuate for a hurricane.

Emergency officials, who have struggled for years to refine hurricane warnings, face an unprecedented challenge in convincing a fearful, exhausted and broke public that people are safer leaving their homes than sheltering in place.

"We have to be blunt with people," said Craig Fugate, who ran the Federal Emergency Management Agency from 2009 to 2017. "When the evacuation order is issued, you need to move to higher ground.

"The concern is that people that are in evacuation zones have been told to stay home and social distance," Fugate added.

Hurricanes can be lethal for those who ignore evacuation orders because of dangers that many people don’t understand.

Major hurricanes have killed 6,507 people since 1980 — an average of 163 people a year, according to a NOAA estimate. Hurricanes Maria in 2017 and Katrina in 2005 account for more than 4,800 of the estimated deaths, and the exact number of fatalities in those events remains uncertain.

The leading cause of death in U.S. hurricanes is not wind but water. Storm surges quickly flood coastal areas as well as inland communities. People drown in their homes as they shelter in place or in cars as they try to flee.

When Superstorm Sandy swamped the Northeast in 2012, roughly half of the 159 deaths were due to drowning.

Half of the drowning deaths occurred in homes that were located in areas under mandatory evacuation orders, the federal Centers for Disease Control and Prevention found. The CDC said drowning deaths in evacuation areas are "preventable" with more effective warnings.

The COVID-19 pandemic has forced officials to stress to a skeptical public the danger of flouting evacuation orders while also cautioning people about going to emergency shelters that could become infection hot spots.

As Tropical Storm Isaias started moving up the East Coast on Aug. 2, North Carolina Gov. Roy Cooper (D) urged residents not to be deceived by the relatively mild winds.

"The most important thing is to get out of harm’s way if you are told to evacuate," Cooper said, noting the danger of storm surge and flash flooding.

Across the state, 19 shelters were opened with a combined capacity of more than 2,300.

On Aug. 3, when Isaias hit North Carolina as a Category 1 hurricane, the shelters accommodated a total of 40 people, according to a FEMA report.

"I don’t think they heeded the warning," said Edward Conrow, emergency manager in Brunswick County, which was one of three North Carolina counties to issue mandatory evacuation orders.

Conrow spoke by telephone Wednesday as he helped move people off a barrier island that was swamped by storm surge that left cars flooded and residents stranded.

The National Weather Service had predicted the surge, yet "people downplayed it," Conrow said. "And here we are, and we’re still moving people out of the town because they’re stranded."

Coastal U.S. residents have a long history of ignoring evacuation orders and weather forecasts. Research shows that people facing oncoming hurricanes make evacuation decisions based on their perceived risk, which is influenced by numerous factors including what friends and neighbors are doing and their own experience with hurricanes.

"People in theory will say they will listen to authorities. But they’re really relying on friends, family and neighbors as well as their own prior experience," Ploran said. "They talk about authorities telling them to evacuate, but instead they say, ‘My neighbor says there’s never been flooding on this street.’ That’s a really hard communication battle to overcome."

‘No talk of going anywhere’

This year, Ploran said, people facing evacuation orders will succumb to "decision fatigue" caused by months of agonizing over whether and how to undertake routine tasks such as going to a grocery store. Too exhausted to make decisions and lacking a clear correct answer — such as whether to evacuate for an approaching hurricane — people will end up staying at home because it’s the easier decision, Ploran said.

Lowman, the Miami Shores mother of two, said that as Isaias approached Florida, "we all just sort of ignored the threat" and did little more than move lawn chairs inside. "It was just too much to think about the pandemic and the threat of the hurricane."

"There’s no talk of going anywhere. Not me, and not anyone I spoke with either. We all stocked up in anticipation of the hurricanes this year," said Lowman, a Miami native. "The fatality risk of a hurricane seems to me much lower than COVID."

The fear of evacuation could be especially acute in the most hurricane-prone states because they have been hit hardest by the pandemic.

The state with the highest infection rate is Louisiana, where 2.8% of the state’s 4.7 million residents have contracted COVID-19, according to an E&E News analysis of federal data.

The risk of sheltering in place could fall especially hard on low-income and minority residents of coastal areas.

Federal, state and county leaders have urged people who evacuate to stay with friends or relatives or to rent hotel rooms so they can maintain social distancing. Congregate shelters should be a last resort, officials have said.

But low-income residents are unlikely to have money for hotels or relatives with spacious homes.

"If they don’t have anywhere else to go, they’re more likely to stay in place," said University of Delaware professor Sarah DeYoung, who has studied hurricane evacuations.

DeYoung found in her research that even before the pandemic, some evacuees had been wary about shelters and viewed them as "potential places of crime and victimization."

"People already have a negative stigma of shelters," DeYoung said. "When emergency managers are saying this is a last resort, their intention is to keep people safe. But I worry about the exacerbating effects of that stigma."