When wind is the firmest thing 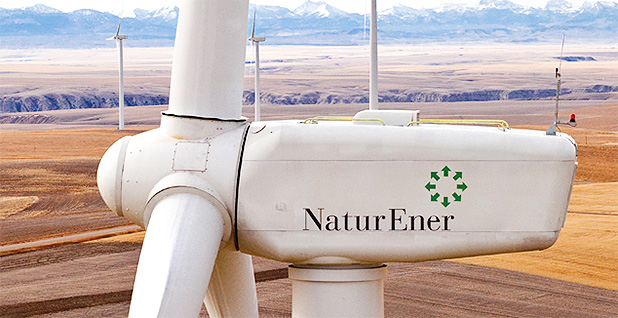 The peak season for electricity at the Rim Rock Wind Farm in northern Montana is in the winter, when a steady wind blows from the Rockies and gets 126 turbines spinning. Then the wind flags for a moment, and an unusual chain of events begins.

In San Francisco, at the headquarters of the wind farm’s owner, NaturEner USA, a technician in front of a giant screen observes the downtick. A computer in a locked closet sends an alert to a trader in Vancouver, British Columbia, who immediately buys a small block of electricity from a dam somewhere in Washington state, just enough to make up for the shortfall.

The data about that watery block is routed back to San Francisco, blended with the wind power and delivered on a pre-agreed contract to a utility somewhere on the West Coast, resulting in firm power, the premium stuff, as reliable as any coal plant but with zero carbon emissions.

This is the hybrid solution that a couple of companies in the Pacific Northwest have hit upon as a way to make the wind, the most capricious of elements, into a low- or no-emissions resource than can compete for top dollars in electricity markets.

It also provides a different perspective on the furious debate over "baseload power" now unfolding in Washington, D.C.

Rick Perry, the head of the Department of Energy, is supposed to deliver a report next month that may portray renewable energy as a threat to baseload generation that has traditionally been supplied by power sources like coal and nuclear. Experts across the spectrum have pushed back, saying there is lots of room for renewables to scale up and keep the grid reliable.

NaturEner USA, founded a decade ago with Spanish parentage, doesn’t claim to provide baseload power. But it has gone a step in that direction by figuring out how to provide firm power, where a provider’s hour-ahead guarantee is crucial to shoring up the electric grid.

Another company, Avangrid Renewables, a subsidiary of Spanish wind giant Iberdrola SA, is doing a version of the same thing, supplementing its wind power along the Columbia River with natural gas.

"There has been always this disadvantage, or negative spin, on wind because it’s not firm," said Candace Saffery Neufeld, NaturEner’s chief operating officer. "And we feel like we’re challenging those presuppositions."

NaturEner began in 2006 when José Maria Sánchez Seara, a wind executive from Madrid, set up shop in a hotel room near San Francisco’s Union Square with nothing more than a laptop.

It now has 75 employees, most of whom work in a handsome brick building in the Financial District, with 20 at the company’s three U.S. wind farms. Their collective capacity of 389 megawatts is by far the largest fleet in the windswept state of Montana. NaturEner also has rights to a transmission line across the border to the Canadian province of Alberta, where it is developing another 600 MW of wind projects.

Its San Francisco office is sheathed in security. Past its locked door, an unsmiling man at the front desk ensures that every line in the entry book is in order before issuing a badge.

Sánchez Seara fetches a visitor past a partition and into the office, where everyone seems too intent on their work to notice a newcomer. Along one wall is a thick, locked door, behind which sit the computer servers. Next to it is a control room, also locked, where three technicians watch a wall-size bank of screens.

This control room was completed last year with nearly identical technology to that found in the control room of the California Independent System Operator, one of the most sophisticated grid control rooms in the world, Sánchez Seara said. The largest image on the screen is a map of a wind farm.

Each turbine is represented by a purple arrow, which lengthens or shortens, and oscillates side to side, depending on the direction and strength of the wind.

All of the arrows are long. A screen on the right tracks the farm’s output with a black line, which scrapes near the top of the chart.

There’s a reason that NaturEner has such high technology and high security. It also serves as a balancing authority, making up two of the 34 authorities in the western part of North America that play a key role in ensuring that electricity generation and consumption are in perfect equipoise. It is one of the smaller such authorities, since it reigns over only its own wind farms but still needs to meet the standards of the North American Electric Reliability Corp., which are so stringent that it retains three lawyers just to stay in compliance.

NaturEner has crafted a complex ecosystem to perform its balancing duties while also delivering electricity into states and provinces all over the West Coast, each of which operates by its own sets of rates and rules.

Morgan Stanley Capital Group Inc., a trader in energy and metals, keeps an office in Vancouver and sells the output from NaturEner’s wind farms to anywhere in the West that transmission lines allow. It packages the energy into whatever form will fetch the best price. Sometimes what the market wants is firm power.

"Firm means that I show up," explained Sánchez Seara, offering an example. "I will get you 100 megawatts, and if the wind doesn’t blow, I need to figure that out. I need to deliver what I promised you to deliver."

NaturEner is constantly estimating how much energy its wind turbines will produce two hours from now. Those projections are often 20 to 30 percent off, too high or too low. This means that when it enters into its firm contracts for an hour ahead of time, there is a good chance that the wind — and NaturEner — will fall short.

In those cases, Morgan Stanley makes a quick buy from an array of hydroelectric dam operators in Washington state that have something to sell.

In Portland, Ore. — about halfway between NaturEner’s California control room and its Vancouver trading floor — is the headquarters of Avangrid Renewables, another company that is blending wind with other power sources to make it a solid block.

The challenge for Avangrid is different. In the Pacific Northwest, it owns 1,400 MW of wind turbines flanking the Columbia River as it wends through the states of Oregon and Washington. Its partner is the Bonneville Power Administration, the federal agency that controls the majority of hydropower dams in this rainy corner of the country.

Avangrid’s supplemental energy source isn’t dams, though. It’s natural gas. In Klamath Falls, Ore., it has a 540-MW co-generation plant and four small peaker plants that can turn on if supplies are tight.

Both Avangrid and NaturEner say that there’s one main reason it makes sense for them to turn wind power into firm power: They are located in the Pacific Northwest, one of the most Balkanized areas on the continent when it comes to sharing electricity.

Most of the country is served by a central system operator, such as California’s ISO, the Midwest Independent System Operator or the PJM Interconnection, which coordinates a huge swath of the Mid-Atlantic region. They are blenders, taking inputs from a constellation of generators and dispatching them to users.

In the Pacific Northwest, to borrow a phrase, every man blends for himself.

The other option is to turn to the BPA, which is the largest balancing authority in the region but comes at a cost.

Beane explained that the BPA initially had a difficult time handling the steady growth of wind power along the Columbia River. The winds blow upriver, meaning that when one wind farm is producing, they all are, creating massive spikes and troughs on BPA’s system.

BPA responded by imposing a charge on wind operators, pegged not to how much wind they produced at any given time, but to the overall capacity to produce. Those charges were so costly that it motivated Avangrid to acquire its natural gas plants, and in part motivated NaturEner to stand up its own balancing authorities so it could exist outside of BPA’s boundaries.

"In the Pacific Northwest, it works because it’s not nearly as efficient as a larger market would be," Beane said. "It’s a smaller, more clunky market."

But it is a microcosm for what those larger system operators have claimed, in response to the Trump administration’s criticism that intermittent renewable energy undermines baseload. They have said that renewables, even a lot of them, can be reliable as long as they are carefully coordinated, like in the control rooms of NaturEner and Avangrid.