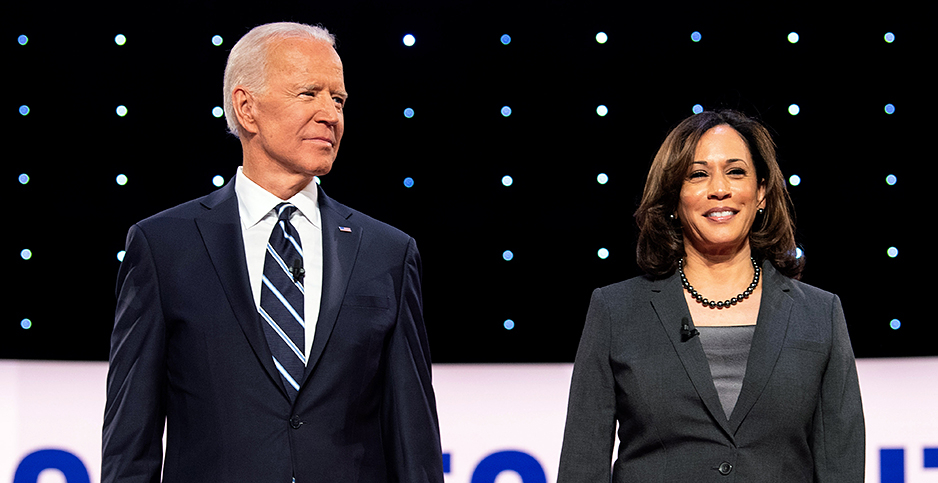 Presumptive Democratic presidential nominee Joe Biden is running on the most aggressive environment and climate change platform ever, but his running mate has backed even bolder ideas.

Sen. Kamala Harris (D-Calif.) ran for president last year and carved out a set of environmental positions that she saw as part of a progressive justice-focused platform, including zealously pursuing prosecutions against polluters and elevating environmental justice in the federal government (E&E Daily, Aug. 12).

But some of her positions conflict with Biden’s. And so far, it’s unclear if the Democratic ticket as a whole will move as a result.

The two are scheduled to make appearances together this afternoon. Here are some of the areas where Biden and Harris have different positions.

Perhaps the starkest contrast between Biden and Harris on the primary campaign trail was Harris’ embrace of the Green New Deal, the wide-ranging climate platform supported by progressives like Rep. Alexandria Ocasio-Cortez (D-N.Y.).

It helped Harris sell herself as to the left of Biden during debates. She was also quick to team up with Ocasio-Cortez on progressive climate legislation on Capitol Hill.

Biden, meanwhile, has backed away from the Green New Deal as a rhetorical device as he attempts to avoid the GOP’s "socialist" label in swing states.

Particularly early in the campaign, Biden’s climate talking points were moderate in comparison with the likes of Harris and Sen. Bernie Sanders (I-Vt.).

But in the end, the climate plan he expanded on last month embraces many of its principles (E&E News PM, July 14).

The Green New Deal is a fluid concept that’s often defined by whoever is talking about it, but generally it focuses on government spending to address climate change, with a heavy focus on jobs and environmental justice.

Biden’s $2 trillion plan would do just that, and it now includes many ideas pushed by Ocasio-Cortez and progressive activists.

Biden has been under significant pressure from progressives to come out in opposition to hydraulic fracturing for oil and natural gas.

But other than seemingly endorsing the idea in a debate and walking it back later, Biden hasn’t backed getting rid of fracking (E&E News PM, March 16).

Harris, on the other hand, wants to ban fracking nationwide, which would likely require congressional action.

"There’s no question, I’m in favor of banning fracking," she said last year at CNN’s town hall on climate change, agreeing to move to ban it on her first day in office.

The oil industry and its allies say that threatens millions of jobs. President Trump and the GOP have locked onto Harris’ fracking position to paint her as an environmental extremist who would threaten the economies of major swing states like Pennsylvania and Ohio (Energywire, Aug. 12).

Harris has come out in support of abolishing the Senate’s filibuster in order to pass major environmental legislation like the Green New Deal. The filibuster effectively prevents the upper chamber from passing most legislation without 60 votes — a three-fifths majority.

If Congress failed to act on meaningful climate legislation because of the 60-vote threshold, "as president of the United States, I am prepared to get rid of the filibuster to pass a Green New Deal," Harris said at the CNN event.

The president doesn’t have direct power over the filibuster, but his or her support does have symbolic weight.

Biden, on the other hand, has been more resistant than many of his primary opponents to backing getting rid of the filibuster. A veteran of the Senate himself, he’s instead expressed hope about compromise.

But he’s recently opened the door slightly to the idea of stopping the filibuster, telling reporters that it would depend on how difficult Senate Republicans would be if they were in the minority. "I think you’re going to just have to take a look at it," Biden said.

Biden and Harris have both been relentlessly critical of the fossil fuel industry, and both have pledged to prosecute polluters and end subsidies for the industry.

Harris, however, proposed to take it a step further on the international stage during her primary bid.

Her climate plan proposed to convene major emitters in 2021 to negotiate an international phaseout of fossil fuel subsidies and a managed decline of production around the world.

The novel idea would go beyond Biden’s commitments, which include a pledge to quickly rejoin the Paris Agreement.

Biden wants to convene world leaders to come to various international agreements like increasing countries’ pledges under Paris, cracking down on emissions China is causing by backing fossil fuel use around the world and creating incentives for Brazil to preserve the Amazon rainforest.

The former vice president, however, hasn’t mentioned international efforts to crack down on fossil fuels.

Still, it’s clear that Harris and Biden share the goal of phasing down the burning of fossil fuels around the world.