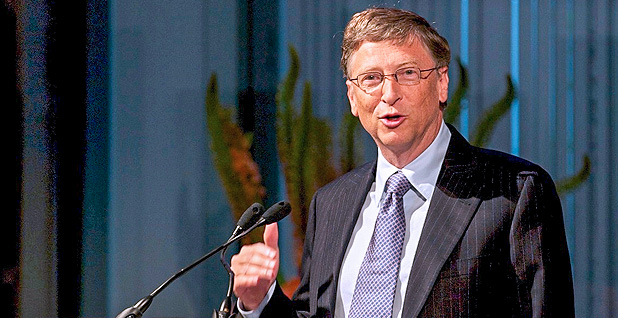 Bill Gates has something in common with President-elect Donald Trump. Photo courtesy of Wikipedia.

President-elect Donald Trump is building a Cabinet that loves coal and oil. Microsoft Corp. founder Bill Gates is directing billions of dollars toward clean energy. But they do seem to agree on one thing: It’s important to commercialize discoveries from the national laboratories.

On the first anniversary of the Paris climate accord, Gates’ new clean-energy investment group announced yesterday that it would create a billion-dollar fund to accelerate low-carbon technology, with a focus on research coming out of national laboratories around the world.

On Friday, a memo from Trump’s transition team to the Department of Energy was leaked. The extensive questionnaire included several queries that indicated commercialization of work from the national labs is a high priority.

"What mechanisms exist to help the national laboratories commercialize their scientific and technological prowess?" one question asked.

Strangely, this is an area where the outgoing Obama administration and the incoming Trump one would also be in accord. Obama’s DOE has been an enthusiastic champion of commercializing discoveries from the 17 national laboratories, which are overseen by the Energy Department with a budget of about $12 billion. It has beefed up the Office of Technology Transitions, created regional partnerships and launched accelerators to merge energy startups with lab talent (Energywire, Sept. 10, 2015; Energywire, Nov. 14).

But what to commercialize is where Trump and Obama/Gates could have very different plans.

One sort of breakthrough …

Yesterday’s announcement by the Breakthrough Energy Coalition brought substance to an effort that was unveiled at the Paris talks last year but has been in stealth mode since (Greenwire, Dec. 12). It was formed by Gates, who is America’s richest man and who has invested much of his energy and resources in solving the energy-climate problem (Energywire, Dec. 1, 2015).

The group will create a venture-capital fund, called Breakthrough Energy Ventures, "committed to investing in new energy technologies emerging out of government research institutions to provide reliable, affordable power with zero emissions," according to its website. The group is recruiting a management team and will invest $1 billion by next year, according to Quartz.

The fund will be a vehicle for 21 of the coalition’s 30 members to invest in low-carbon technology.

It’s an extraordinarily wealthy and international group, with holdings of nearly $170 billion. Those signing onto the fund include Hasso Plattner, the co-founder of German software company SAP SE; Chinese internet magnate Jack Ma; Patrice Motsepe, the founder of a major South African mining company; and Mukesh Ambani, the chairman of Reliance Industries Ltd., one of India’s biggest industrial conglomerates.

The fund seeks to engage in a sprawling range of economic activity, including electricity, transportation, agriculture, buildings and manufacturing. It is also highly specific, targeting 55 "technical quests" that range from high-efficiency appliances and low-carbon steel production to reducing food spoilage and making fuels from biomass.

Donald Trump has reason to love and hate the members of the fund. At the Democratic National Convention, the former Republican Bloomberg elicited laughs when he endorsed Hillary Clinton — and insulted her opponent — saying, "Together, let’s elect a sane, competent person."

On the other hand, another member is Masayoshi Son, the CEO of Japan’s Softbank Group Corp., whom Trump paraded in front of the television cameras at Trump Tower last week to celebrate Son’s plan to invest $50 billion in the United States.

Another Breakthrough member is Jeff Bezos, founder of Amazon.com Inc., who reportedly will meet with Trump along with other tech leaders at Trump Tower tomorrow.

Conversely, Gates and his fund members have reason to believe that a gulf exists between their interests and Trump’s.

The Trump transition team’s questionnaire indicated that renewable energy will be met with suspicion at Trump’s Department of Energy (Energywire, Dec. 12). This is at loggerheads with Breakthrough Energy Ventures, where all manner of renewable energy sources, from solar and wind to geothermal and ocean energy, might be part of its portfolio.

Another clash involves Mission Innovation, an effort by the governments of 22 countries, including the United States, to double clean energy investment. It was announced alongside the Breakthrough Energy Coalition at the Paris climate talks last year, and the two are considered by many to go hand in hand.

In the questionnaire to DOE, Trump’s transition team asked, "Who ‘owns’ the Mission Innovation and Clean Energy Ministerial efforts within the Department?"

While the intent of the question is unknown, it may be linked to other queries that seemed to target individuals at the Energy Department involved in international climate change work and that have subsequently caused alarm among department staff that a "witch hunt" may soon be underway (Greenwire, Dec. 12).

Other questions posed by Trump’s transition team, however, indicated that the commercial output of the national labs is on their radar — a potential area of alignment with Gates’ group.

The questions were detailed, asking DOE to delineate between the labs’ basic and applied research, find out which technologies are currently on the market subsidy-free and spell out what programs are designed for commercial deployment. It also asked about what proceeds the labs have received in licensing and royalties.