Where in the world is Scott Pruitt? 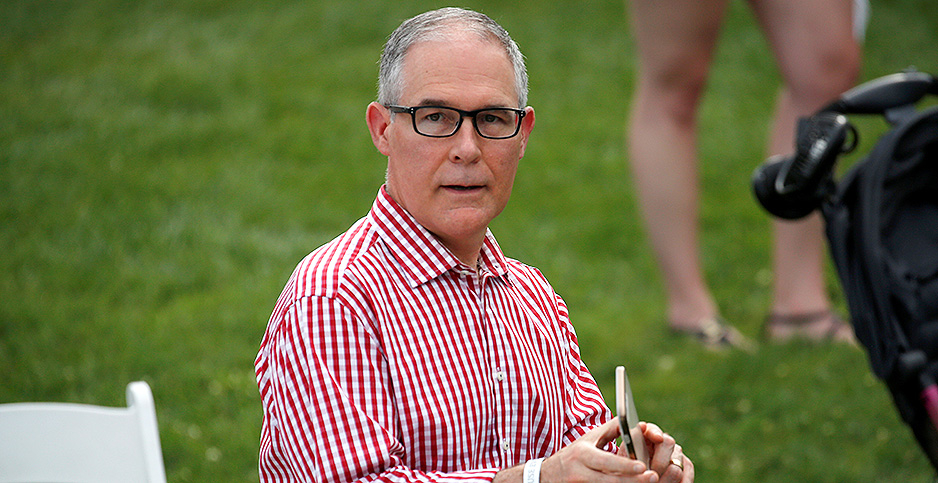 Former EPA Administrator Scott Pruitt holds a mobile phone during a picnic for military families at the White House on July 4, 2018. Joshua Roberts/Reuters/Newscom

A year ago this week, Scott Pruitt was spotted on the White House lawn for Fourth of July celebrations. By the following day, the then-EPA administrator was on his way out.

On July 5, 2018, President Trump announced on Twitter that he had accepted Pruitt’s resignation. That was the culmination of months of headline-grabbing ethics scandals, forcing Pruitt from office and subsequently the public spotlight.

As the anniversary of his exit from EPA approaches, Pruitt — a longtime public figure in Oklahoma as state senator, attorney general and minor league baseball team co-owner — has taken on a more withdrawn persona.

The ex-EPA chief’s past champions in Washington, D.C., have not been in touch with him.

Sen. Jim Inhofe (R-Okla.) said in an interview last week that he hasn’t spoken with Pruitt since around the time of his resignation from EPA.

"My answer to your question is I haven’t talked to him since that time," Inhofe said.

For the past year, EPA observers have played a game of "Where’s Waldo?" — replacing the bespectacled children’s book hero with Pruitt.

Last fall, the former administrator was spotted at a Kentucky Coal Association meeting. In March, he spoke at the Dallas County Republican Party’s annual Reagan Day Dinner in Texas. This April, he registered as a lobbyist in Indiana on behalf of a Hallador Energy Co. subsidiary in an effort to save coal power plants. And he has been consulting for coal CEO Joseph Craft, The Washington Post reported.

One reporter even tweeted that Pruitt was seen on a treadmill in a Tulsa, Okla., gym.

"He just sort of disappeared after he resigned," said Myron Ebell, director of the Competitive Enterprise Institute’s Center for Energy and Environment, who said he last talked to Pruitt before he resigned. "He is doing what he is doing. He is keeping a low profile."

Pruitt resigned from EPA last July facing allegations that he had abused his public office. Andrew Wheeler, his deputy administrator, took over and was later confirmed by the Senate this February as head of the agency.

Sen. Tom Carper (D-Del.), ranking member on the Senate Environment and Public Works Committee, was a vocal critic of the former administrator.

"I fought his nomination as hard as I fought any nomination, and every now and then, I feel vindicated," Carper said about Pruitt.

Pruitt didn’t respond to voicemails from E&E News for this story. An automatic reply from his email account — signed with a "blessings to you" valediction — said he is transitioning it to receive messages only from friends and family.

Pruitt has seemingly sought to put the EPA chapter of his life behind him.

"Scott and Marlyn are doing well and moving forward with their lives," said Nick Garland, senior pastor of First Baptist Church Broken Arrow, in an email, referring also to Pruitt’s wife. Pruitt and his family have attended the church for decades.

Garland was responding to an E&E News interview request for this story, which he declined.

Pruitt listed a Tulsa address on his lobbyist registration form. Several of his former senior aides at EPA — many of whom followed him from Oklahoma to the agency — have returned to the state, as well.

But like Inhofe, most have not stayed in touch with the ex-administrator.

A former EPA senior adviser, Kenneth Wagner was once a law associate of Pruitt’s and his political action committee treasurer. But Wagner, now Oklahoma’s secretary of energy and environment, told E&E News he has only communicated with Pruitt once by phone, once in person and once by text — all personal in nature — since the latter’s resignation.

"I have not spoken to Mr. Pruitt in person or phone since around the end of August of 2018," Wagner said in an email, adding that Pruitt had requested his home address since they last communicated, but he hasn’t received anything from him.

Albert "Kell" Kelly, another Pruitt friend who went to EPA and led a Superfund task force at the agency, said in an email that he had "spoken briefly" with the former administrator only three times in the past year.

Kelly is now in private law practice in Bristow, Okla. He had applied for the city attorney’s position there but said he had withdrawn from competition for the job.

Others have landed back in Oklahoma, as well.

Nearly two weeks before Pruitt resigned last year, Lincoln Ferguson, another senior aide, filed a notification, obtained under the Freedom of Information Act by E&E News, that he was in job talks with Continental Resources Inc.

The oil and gas company, with headquarters in Oklahoma City, is led by Harold Hamm, who was co-chairman of Pruitt’s reelection as Oklahoma attorney general. Ferguson is director of public relations for the company, according to his LinkedIn profile.

Other former Pruitt aides have stayed in politics and policy.

"In terms of how closely he has stayed in contact with EPA folks, I think it is very infrequently," said a former EPA official about Pruitt. "Everyone has moved on and is happy and thriving in other roles."

Pruitt aimed to pare back environmental rules during his time at EPA, sparking a deregulatory agenda that still carries on at the agency under the Trump administration.

Under his watch, EPA proposed repeal of the Obama-era Clean Power Plan, designed to curb power plants’ carbon emissions. The agency offered to revoke the Obama administration’s Waters of the U.S. rule. And it planned to revise strict fuel economy standards for cars.

Those actions have been finalized or are about to be finalized with narrower replacement rules at EPA. Combined with a dramatic shift away from climate science, Pruitt’s legacy lives on at the agency.

Inhofe said Pruitt came under tough scrutiny as head of EPA. "I think some of the criticism was unfair, but some of it, I think, was probably fair," said the senator.

"The policies that he had, I agreed with. It’s the other problems not associated really with his performance or his job that was kind of his demise," Inhofe said.

Ebell, who was the head of Trump’s EPA transition team, said Pruitt was not his first choice to lead the agency.

"I came up with a list of names of people who would be acceptable as EPA administrator, and Pruitt was on it. But he was not the name I sent up for the job," he said. Ebell declined to name who he did recommend for EPA administrator but stressed that his task as head of the transition team was primarily to make policy, not personnel, recommendations for the agency.

Kelly emphasized Pruitt’s focus on the Superfund program as administrator.

Kelly’s comments refer to Superfund toxic waste sites that have seen action under the Trump EPA as well as meetings with the famed environmental activist.

The former administrator’s critics are still displeased with the EPA. Asked if the agency is better off after Pruitt’s departure, Sen. Tom Udall (D-N.M.) said no, because EPA has continued to undermine regulations on climate and chemicals.

"Not at all, because of the current leadership. This leadership is taking us down the wrong path," said the senator, who sponsored a resolution last year calling for Pruitt’s resignation.

During his time at the agency. Pruitt often made news with ethics flaps.

EPA was found to have violated appropriations law for not telling Congress about installing a $43,000 secure phone booth in his office. The agency’s inspector general rebuked Pruitt for his 24/7 personal security detail and costly first-class travel.

The IG office has closed other cases on Pruitt — such as his rental of a Capitol Hill condo tied to a lobbyist with business before EPA and alleged misuse of his public position, like having EPA staff help him in trying to secure his wife a Chick-fil-A franchise — with "inconclusive" results because investigators didn’t interview Pruitt before he resigned.

Nevertheless, the EPA watchdog has other reviews related to Pruitt’s tenure expected to be released this year.

EPA IG spokeswoman Tia Elbaum estimated the IG office will release its audit of EPA’s preservation of emails and text messages this summer, while another audit looking at "administratively determined" positions — used to give hefty pay raises to close Pruitt aides — should come in late summer.

Regarding keeping track of Pruitt’s records, the agency has already looked into the matter. In a letter last July to Environment and Public Works Chairman John Barrasso (R-Wyo.), EPA said an internal review of electronic searches of Pruitt’s official email for FOIA requests did not find "any responsive documents that were not included in the FOIA responses issued by" the agency. EPA also said in the letter, obtained under FOIA by E&E News, that it would continue to review Pruitt’s records after his resignation.

EPA press officials didn’t respond to questions from E&E News for this story, including whether that records review is now complete.

Ebell said Pruitt wasn’t ready for the inevitable attacks he would face as an EPA administrator shaking up the agency and facing a senior civil service at the agency that can be resistant to change. He compared Pruitt with Anne Gorsuch Burford, the Reagan-era EPA head who also resigned in the wake of scandal.

"He should have prepared himself better for the Washington scene," Ebell said. "There was only one person before Pruitt who tried to reform the agency. That was Anne Gorsuch, and she was run out of town."

The former head of Trump’s EPA transition team added, "He should have studied what happened to Gorsuch. But he never did."

Pruitt had a penchant for secrecy. A hallway leading to the administrator’s office, lined with his predecessors’ portraits, was closed during his tenure.

Wheeler opened up that hallway when he took over last year. EPA employees said they haven’t seen a portrait of Pruitt hanging there yet.