Where’s Trump? He hasn’t tweeted about climate in 350 days 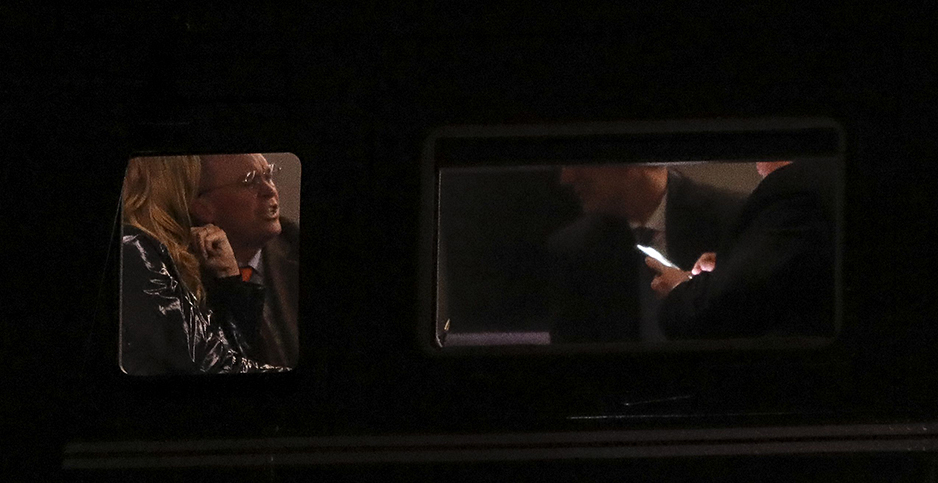 President Trump is seen using his phone on Marine One last month as acting Chief of Staff Mick Mulvaney and others look on. Sipa/Newscom

President Trump hasn’t used Twitter to malign climate science in almost a year. It’s been 350 days, to be exact.

The radio silence doesn’t mean Trump has stopped talking about it — in fact, his real-life rhetoric on global warming has wildly fluctuated in recent months.

But the absence of climate change from Trump’s favorite medium has caught the attention of activists and political strategists. And they said it could be a sign that Trump — or at least someone in his inner circle — is paying attention to shifting U.S. attitudes toward global warming.

"Everybody sees the same polling, and it shows that more voters are concerned about it," said Doug Heye, the former communications director for the Republican National Committee. "Young people are not only increasingly concerned about it but it’s one of their very top considerations, and I think that has been more on the Democratic side, but also creeping up for independents and Republicans, too."

That’s a signal to politicians that climate policy could motivate choices in the voting booth, he said. It’s also a stark contrast from just a few years ago, when Republicans wouldn’t even bother with climate policy because their constituents didn’t care, Heye said.

Now Trump might be hearing a new message from his campaign advisers: Mocking climate science could imperil his reelection.

"I don’t think the language we hear helps Trump win over new voters, but it’s been fairly clear that’s not a strategy of the campaign," Heye said. "At a certain point, it becomes an existential political challenge for Republicans as younger voters become not so young, which would correspond with them voting more, and that’s something they need to be concerned about."

Climate change has long been a fascination of the former host of "The Apprentice."

Over the years, Trump has tweeted at least 150 times about global warming and climate change, calling it a "hoax" and claiming that scientists are lying fame-seekers and that cold weather outside his window means NASA and NOAA are wrong to conclude that humans are warming the Earth at an unprecedented pace.

For comparison, Trump’s tweets about climate change are on pace with his complaints about CNN, which earned 180 mentions since he took office. And they surpass the 117 times he used Twitter to call a political opponent a "dope" or "dopey," according to the Trump Twitter Archive, founded by Boston-based programmer Brendan Brown.

A common Trump sentiment is that "dollar-sucking wiseguys" changed the name of global warming to climate change to deceive the public.

"The weather has been so cold for so long that the global warming HOAXSTERS were forced to change the name to climate change to keep $ flow!" Trump tweeted in January 2014.

But lately, at least on Twitter, he’s been quiet.

The last time Trump mocked climate science was on March 12, 2019, when he quoted Patrick Moore, who rejected mainstream research while appearing on "Fox and Friends." "The whole climate crisis is not only Fake News, it’s Fake Science," Moore said, according to the president’s tweet.

A few weeks earlier, Trump used his Twitter account to raise personal objections about climate science. The tweet, on Feb. 10, 2019, marked the last time Trump used Twitter to malign climate change in his own words. He was commenting on Sen. Amy Klobuchar’s (D-Minn.) entrance into the presidential race. She made the announcement during a snowstorm.

"Well, it happened again. Amy Klobuchar announced that she is running for President, talking proudly of fighting global warming while standing in a virtual blizzard of snow, ice and freezing temperatures. Bad timing. By the end of her speech she looked like a Snowman(woman)!" Trump tweeted.

His attacks on science aside, Trump has used Twitter to object to climate-related policies in the past year. He defended his decision to pull out of the Paris Agreement, which he said "protects the polluters," and he retweeted a campaign staffer who said that Democrats’ "plan for climate change is to eliminate more than 1 million jobs."

The nearly yearlong gap without climate science criticism is notable, considering that Trump has ridiculed and misrepresented climate science since he opened his Twitter account in 2009.

And yet, the silence is not without precedent.

In 2015, Trump abruptly stopped mocking climate science on Twitter after he announced his presidential campaign. The Twitter silence lasted through the election. His criticism started again after he won the presidency, though at a far reduced pace compared with the dozens of times each year that Trump mocked climate science on his Twitter account in the years leading up to his candidacy.

"I think most likely his attention has been on other things, like impeachment. I would not put it past him to continue making some very silly, misleading comments on climate change," he said. "I would be surprised if he can hold himself back."

Polling shows more Americans want the government to address climate change than when Trump was inaugurated in 2017. About 40% of Republicans think the government is not doing enough to address the issue, including more than half of GOP voters under 40, according to a Pew Research Center report released last year. Yet major partisan divides remain on prioritizing climate policy, with 78% of Democrats saying it should be a top issue for Trump and Congress, while only 21% of Republicans feel that way.

Still, Republicans have noticed that young voters want more from them.

House Republicans introduced a measure earlier this month to plant a trillion trees to mitigate carbon emissions along with other measures, which marks one of the party’s most significant efforts in years. A survey of right-leaning voters under 35 released this month from the American Conservation Coalition, a group of young conservatives who push for climate action, found that more than half of respondents said it would affect their vote this cycle, and 77% said it was important to them.

Trump might see those changes. In January, he said that climate change was not a hoax but a "very serious subject." In December, he said, "Climate change is very important to me."

But his pronouncements have whipsawed from the realm of acceptance to the domain of denial. He has said the climate will "change back," he dismissed the National Climate Assessment, and he claimed that sea levels might rise by less than an inch over two centuries. That level was surpassed years ago (Climatewire, Dec. 12, 2019).

One of Trump’s allies would encourage the president to keep rejecting the science. Steve Milloy, a member of Trump’s EPA transition team and a longtime opponent of climate policy, said Trump’s Twitter account, fueled by 70 million followers, has brought more publicity to criticizing climate change than he ever dreamed.

"I never thought this would happen, not in a million years," he said. "I thought it would actually take the reality of a climate regime for people to get it. I’m loving every second of it."