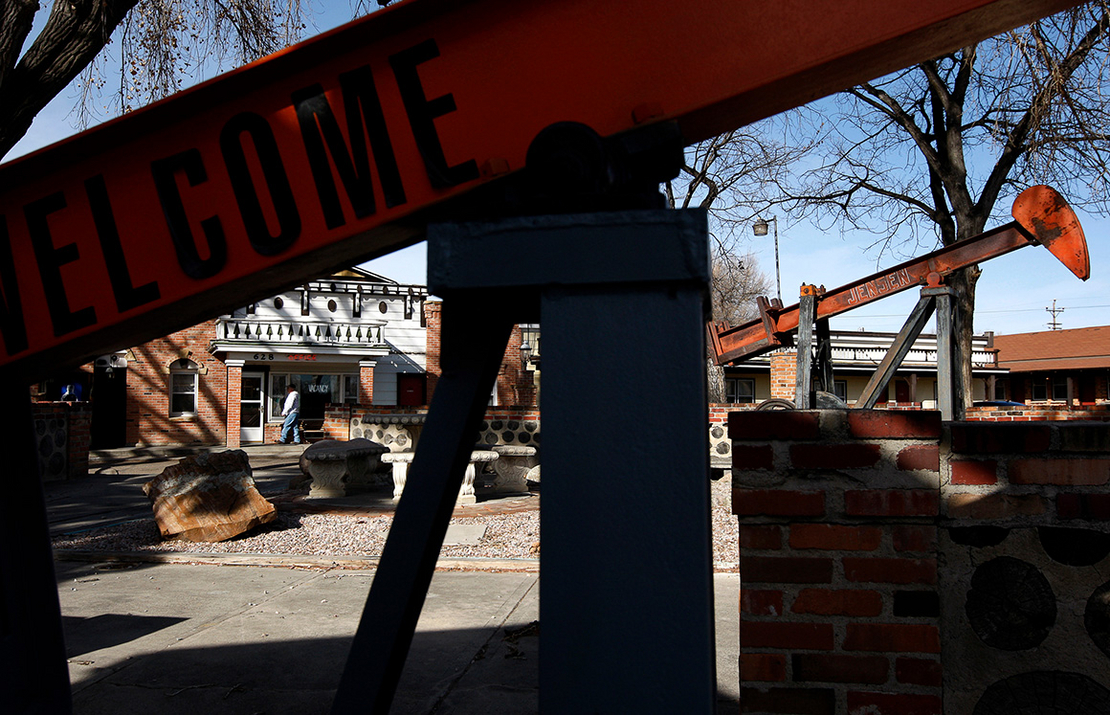 Two pumpjacks, one with the word "Welcome" written across its neck, decorate the area in front of the Plains Motel in 2013 in Douglas, Wyo. Leah Millis/Star-Tribune/AP Photo

A senior Bureau of Land Management official has become embroiled in a whistleblower case that some observers say could test the Biden administration’s commitment to improve relations with BLM career employees after a turbulent four years of the Trump presidency.

At issue is the Trump-era case of Walter Loewen, a former BLM planning and environmental specialist who was disciplined in November 2019. He argues it was in retaliation for raising concerns to his superiors about the impacts to migratory birds from a massive Converse County oil and gas drilling project in Wyoming that was a top priority for the Trump administration. He was ultimately fired in November 2021.

Nada Culver, BLM’s deputy director of policy and programs, is scheduled to testify Tuesday at a Merit Systems Protection Board hearing regarding Loewen’s appeal of his firing.

Culver’s testimony at the hearing could place her in an uncomfortable situation: She actively opposed the Converse County Oil and Gas Project while serving as a senior official with the National Audubon Society prior to joining BLM in March 2021. Culver co-wrote a formal comment letter in July 2019 that mirrored the concerns raised by Loewen when he was working on the bureau’s analysis of the project.

Interior’s argument is simple: Culver was not employed at BLM when Loewen was first disciplined, and does not have any firsthand insight into these personnel matters.

“Appellant has not articulated any reason why the testimony of Nada Culver … is relevant or necessary for this proceeding,” the motion states. “Indeed, Appellant has failed to identify any information that he believes Ms. Culver alone possesses that is relevant to this case.”

Interior said in its motion that Loewen was fired in November 2021 “based on his unacceptable performance and failure to follow instructions.”

But lawyers for the government watchdog group Public Employees for Environmental Responsibility (PEER), which is representing Loewen, counter that Culver’s testimony will corroborate Loewen’s concerns about the oil and gas drilling project, and BLM’s questionable analysis of it.

Loewen has long argued that he was removed from the environmental impact statement (EIS) of the Converse County project, and later disciplined, because he raised concerns over the potential for widespread mortality of raptors and other wildlife from the project, violating the Migratory Bird Treaty Act, the National Environmental Policy Act and other federal laws.

The record of decision approving the 5,000-well project does not include timing restrictions on drilling operations during bird mating seasons and other measures that could protect birds, as Loewen recommended.

So did Culver, in formal comments to BLM on a supplemental draft EIS on the project that she co-authored while at the National Audubon Society with John Rader, a conservation advocate with the Wyoming Outdoor Council.

Culver and Rader recommended that the bureau require the project applicants to work with BLM and the Fish and Wildlife Service on developing a Migratory Bird Conservation Plan that “would establish and evaluate conservation measures for raptors, require monitoring, and establish adaptive management protocols,” they wrote.

The National Audubon Society and the Wyoming Outdoor Council, they wrote, opposed BLM’s proposed alternative “because of the increased adverse impacts to raptors it would allow.”

They also bemoaned the lack of timing restrictions “without justification” for doing so.

“Those same legal vulnerabilities were what our client Walter Loewen was stressing to his BLM bosses during the ‘drilling-crazy’ Trump era,” Jenkins added. “The fact that Ms. Culver stated them in formal comments against the project completely bolsters that Walter Loewen was disclosing legal violations.”

Jenkins said PEER will file a formal motion of opposition later today against Interior’s motion to preclude Culver from testifying.

“BLM’s attempt to block her from testifying is a self-serving obstacle to Walter Loewen’s whistleblower case,” he said.

A BLM spokesperson said the bureau had no comment on the appeals hearing set for next week, or on the motion opposed to Culver being compelled to testify.

The hubbub over the appeals hearing is the latest development in a complicated case that underscores the sometimes enormous differences between the Trump and Biden administrations on conservation and energy development.

Indeed, the record of decision approving the project came amid the Trump administration’s efforts to revise the Migratory Bird Treaty Act to, among other things, exempt oil and gas companies if birds were accidentally killed during the process of normal operations.

In addition, some bureau observers say the case is notable in the context of recent efforts by the Biden administration to improve communication and relationships with career officials at BLM, which during the Trump administration endured a national headquarters move to Grand Junction, Colo. that resulted in at least 135 employees retiring or leaving the bureau.

Interior Secretary Deb Haaland, along with BLM Director Tracy Stone-Manning, has made this a top priority. Stone-Manning has frequently issued all-staff emails updating employees on the ongoing effort to move the headquarters back to Washington, as well as other possible changes to the headquarters structure.

Haaland told Senate leaders during her confirmation hearings last year that she “values the dedication of our career employees” and that one of her top priorities, if confirmed, would be to ensure they “feel appreciated” and are involved in major bureau decisions.