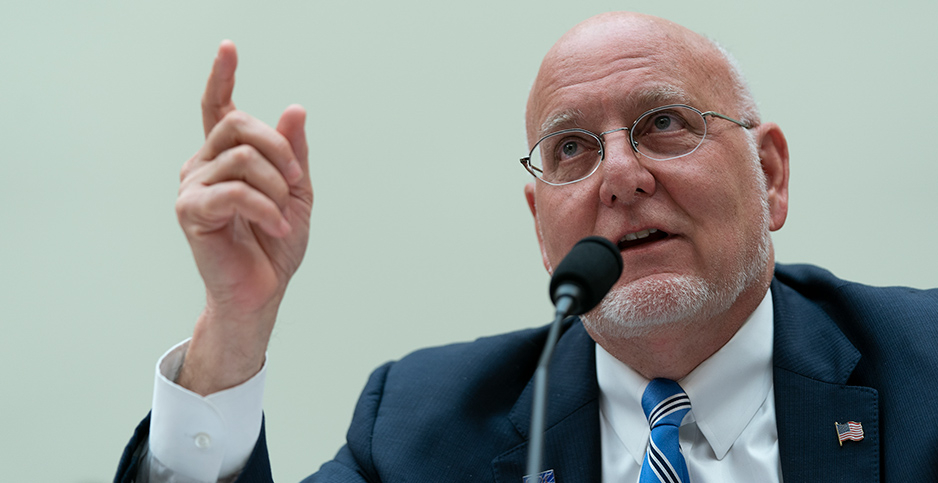 Robert Redfield, director of the Centers for Disease Control and Prevention, testifying at a June hearing on Capitol Hill. Under President Trump, the CDC has stepped away from climate work. Chris Kleponis/CNP/AdMedia/Newscom

An expected whistleblower complaint is the latest escalation in a fight between the Centers for Disease Control and Prevention and its former head of climate work.

George Luber, who led the CDC’s Climate and Health Program, plans to file his complaint this week, E&E News has learned. It will allege that the agency retaliated against him for speaking out on climate change and will raise concerns that the CDC is shifting climate funds to other programs.

Public Employees for Environmental Responsibility had previously prepared to take Luber’s case to the U.S. Office of Special Counsel last year after he was barred from his office. In an account posted online in December, PEER said Luber has been "gagged, reassigned, had his program dismantled, and has been subjected to a welter of seemingly farcical charges."

Environmentalists and public health experts say the turmoil at the CDC points to a larger effort by the Trump administration to silence climate scientists.

The administration’s actions represent an "all-out assault on our health and safety," said Juanita Constible, senior advocate for climate and health at the Natural Resources Defense Council.

"They’re pretending like we don’t have a problem when we very much do," she said.

The Climate and Health Program launched in 2009 under the wing of the National Center for Environmental Health (NCEH). The goal of the program was to help states and local health agencies respond to the public health impacts of climate change.

Some of the efforts include helping North Carolina identify communities at risk due to sea-level rise and educating New Hampshire camp counselors on tick exposure. Constible said such programs help prevent harm before it happens.

"This funding is a critical prevention measure to keep people healthy and out of hospitals and doctor’s offices," she said.

Yet shortly after Trump took office, the CDC canceled a long-planned conference on climate change, a move that Luber opposed. The summit scheduled for February 2017 was later revived through a privately funded effort (E&E News PM, Jan. 26, 2017).

CDC officials did not say why it was canceled, only that they were "exploring options" so the summit could be held later in the year.

That same year, the Climate and Health Program was folded into the asthma branch of the NCEH. The CDC said plans for reorganization began in 2016 as a way to "streamline critical activities and allow greater collaboration between subject matter experts."

But Luber raised concerns at the time that the move would inevitably cause the $10 million set aside by Congress for the climate program to be used instead for asthma activities. NCEH administrators did not respond, according to PEER, which is representing Luber.

In 2018, Luber was briefly named the acting branch chief of the newly formed Asthma and Community Health Branch. He held that position for less than a month before he was placed on administrative leave due to "troubling allegations."

The allegations included charges of improper timekeeping and failing to get approval for teaching a class at Emory University. Luber’s boss had proposed firing him but later backed down after receiving Luber’s response.

In an anonymous response to a survey conducted by the Union of Concerned Scientists, a CDC official said that in areas where the administration has a specific agenda, there is "noticeable top-down control."

"Anything to do with the ACA [Affordable Care Act], abortion, effects of climate change on health, are tightly controlled by the administration’s political appointees," the official said in the 2018 survey. "Other topics, though, are generally left alone."

Jacob Carter, a research scientist with the UCS’s Center for Science and Democracy, said that when experts are not allowed to speak to the public, the public has no information to adapt to the effects of climate change.

Lauren Kurtz, executive director of the Climate Science Legal Defense Fund, said what is happening at the CDC is part of a larger trend of Trump officials telling scientists and nonscientists that they shouldn’t refer to climate change.

The CDC did not respond to requests for comment on the censoring allegations.

Along with allegedly stifling Luber’s work, the Trump administration has also tried to use the budget process to get rid of the CDC climate program.

In its latest budget, the White House proposed giving the NCEH a $52.4 million decrease and eliminating the Climate and Health Program.

The White House said that erasing the program would "end direct funding to states regarding the health effects of climate change."

The House Appropriations Committee, however, has bucked the administration’s request to eliminate the program. Instead, its 2020 appropriations bill recommends giving the environmental health center an additional $34 million and the climate program an additional $5 million.

Democratic Rep. Lauren Underwood of Illinois introduced H.R. 3819, the "Climate and Health Protection Act," which would explicitly authorize the program, authorize $15 million in annual appropriations and prohibit the transfer of funds or reprogramming.

"It is essential that Congress works to support and protect programs like the Climate and Health Program to continue to address emerging health threats brought on by climate change," Underwood said in a press release.

The bill has been referred to the House Energy and Commerce Committee for consideration.

Energy and Commerce Chairman Frank Pallone sent a letter in July requesting a CDC briefing by Aug. 12 on why the climate program was folded into the asthma branch. In the letter, the New Jersey Democrat expressed concern that the action could "undermine the program’s important mission to counter the public health effects of climate change."

The committee’s press office said yesterday the chairman has yet to receive a formal response.

As for Luber, he’s still employed at the CDC and holds his official title, according to PEER staff counsel Kevin Bell.

However, he is not allowed at his former office unsupervised, and he works from home five days a week. Bell said that when Luber does go to the office, he is accompanied by an armed escort.

"He was one of the world’s leading experts of the public health impacts of climate change," Bell said. "He has essentially been gagged at the agency."