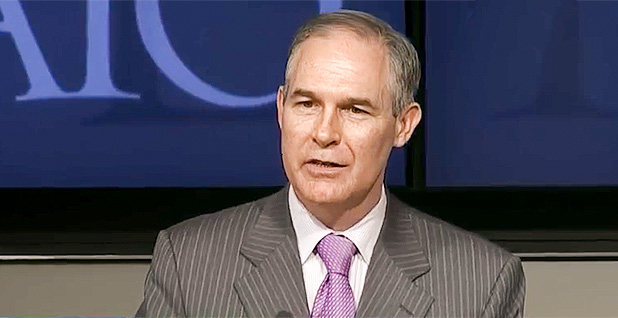 Lawyers working for Oklahoma Attorney General Scott Pruitt battled for months against a whistleblower lawsuit seeking to claw back money from ConocoPhillips Co. for "double dipping" from a state cleanup fund.

But in 2013, Pruitt changed his tune. He filed his own suit against the company, alleging the same double dipping, and potentially pushing aside the former state employees who had been pressing the case for nine years. In September, he quietly settled with the company for $3.8 million.

Now that President-elect Donald Trump has named Pruitt to run U.S. EPA, his allies are touting his involvement in such cases as evidence that he will stand up to oil companies. An advocacy group supporting Pruitt’s nomination noted a similar case in which Pruitt sued BP PLC, seeking to counter Pruitt’s reputation as an ally of oil and gas companies.

"Mr. Pruitt demonstrated that he will take on industry when they overstep," the group, America Rising Squared, stated on its website ConfirmPruitt.com.

But the attorneys for the former state employees who have been pressing the case since 2004 say Pruitt fought them harder than he did the oil company.

"I never saw him do anything to really take on ConocoPhillips," said Thomas Millington, one of the lawyers in the taxpayers’ suit. "I did see him actively opposing people who were taking on ConocoPhillips."

ConocoPhillips in 2012 spun off Phillips 66, which is the company that settled with Pruitt.

Pruitt filed the similar double-dipping case against BP in 2012 but has left it dormant ever since. Court records show BP hasn’t responded, and nothing has been filed since January 2013.

And Pruitt, who has issued more than 60 press releases about federal overreach and his suits against federal agencies, never issued a news release about the ConocoPhillips or BP cases.

About 40 states have established funds to pay for the thousands of leaking underground storage tanks below gas stations. Many were installed in the 1950s or earlier. When they corroded, the gasoline and diesel they leaked became a serious threat to underground drinking water supplies all over the country.

Oklahoma’s fund gets money from a penny-a-gallon gasoline tax approved by the state Legislature in 1989.

Several states have alleged that Phillips, BP and other oil majors "double dipped" by getting insurance money to clean up the sites, then demanding reimbursement from the state cleanup funds.

In Oklahoma, the fund is administered by the staff of the state Corporation Commission. In 2004, two former commission attorneys, Rachel Lawrence Mor and Charles Wright, filed suit saying that ConocoPhillips had unjustly received $3.6 million in reimbursement for tank cleanups.

Their claim alleged ConocoPhillips was reimbursed for expenses the state fund didn’t cover, such as litigation and landscaping.

The legal term for the type of suit is "qui tam." They’re more often referred to as "whistleblower," "false claim" or "taxpayer" suits. If they prove fraud, Oklahoma whistleblowers can get half of any money recovered as a reward.

In 2012, the former state employees added a new claim alleging ConocoPhillips had received insurance payments for tank cleanup, then billed the state. They asked for nearly $4 million.

In April 2012, one of Pruitt’s assistant attorneys general, Nancy Zerr, filed a motion, representing the Corporation Commission, to dismiss the case. She said the former state employees had missed the statute of limitations and couldn’t recover in a whistleblower case since they’d contacted the FBI about it.

"This action should be dismissed, because the plaintiffs lack the capacity to represent the commission in this matter," Zerr wrote.

The motion was denied. In September 2013, Pruitt filed suit, alleging "a bad-faith, deceptive and fraudulent scheme" to drain the cleanup fund. The suit named ConocoPhillips, Phillips 66 and other companies.

Pruitt’s office and Phillips fought efforts by Millington’s clients to intervene. And Pruitt and Phillips jointly sought an order keeping documents from the case secret.

Pruitt handed the case to attorney Phillip McCallum of the Birmingham, Ala., law firm McCallum, Methvin & Terrell. Pruitt also brought McCallum into the BP case. When the case was settled last year, according to the Oklahoman newspaper in Oklahoma City, the McCallum firm got $942,000.

The whistleblowers lost before an Oklahoma County jury in February 2016 but are appealing to the Oklahoma Supreme Court.

Lincoln Ferguson, Pruitt’s spokesman in the attorney general’s office, cited the BP double-dipping case when asked to provide support for his statement that listed among Pruitt’s accomplishments "holding accountable oil and gas companies that were profiting off pollution and defrauding taxpayers." On Friday, Ferguson referred further questions about the cases to the Trump transition team, which did not respond to emails seeking comment.

But the political advocacy group running the "Confirm Pruitt" campaign responded to questions with a general statement that Pruitt acted properly and diligently (Greenwire, Jan. 12).

"Pruitt held these companies accountable and got results, balancing the need for clean air and water against the interests of his constituents and the rule of law," said Jeremy Adler, spokesman for America Rising Squared.

America Rising Squared is a political organization staffed by veterans of past Republican presidential campaigns (Energywire, Jan. 10). It is allowed to keep its donors’ names secret.

Its affiliated super political action committee has been largely underwritten by hedge fund manager Paul Singer and other investors.