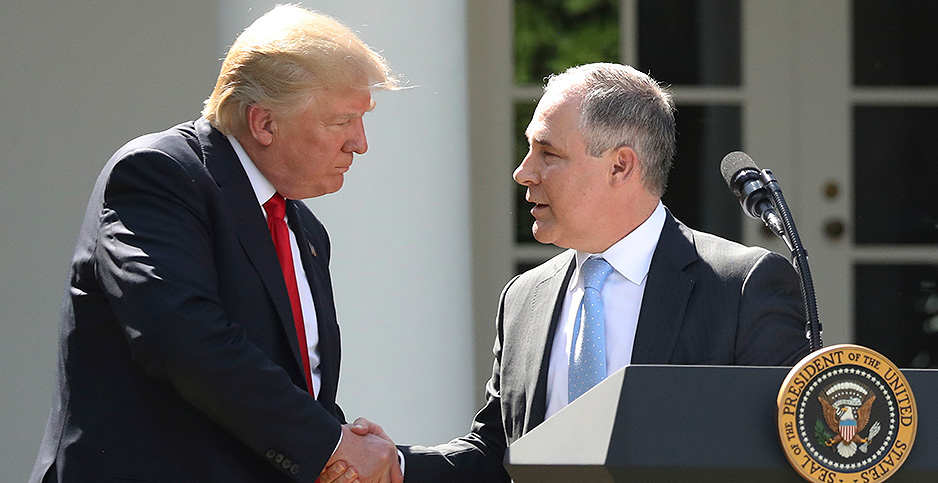 "There are a lot of reports about EPA’s planning on this," Catanzaro wrote July 25. "None of it is being run by us. This seems to be getting out of control."

That exchange is included in a batch of EPA emails released last week to E&E News and other organizations under the Freedom of Information Act. The emails — released as a result of a lawsuit filed by the Natural Resources Defense Council — offer new details about how EPA planned to scrutinize climate science using a national climate report and about how the White House intervened to shut it down.

Pruitt’s planned debate remains in limbo, and the scientist recruited by EPA to lead the exercise has abandoned hope that the Trump team will follow through (Climatewire, June 13).

The plan was to critique the Fourth National Climate Assessment, a congressionally mandated science report issued every four years.

"This report presents an opportunity to evaluate the science around climate change with an open, public ‘Red Team/Blue Team’ exercise," Pruitt said in the draft release. "It is essential that certainties and uncertainties in the science are accurately presented to the public and to decision makers."

EPA would assemble a red team to review the report. The "blue team" defending the study would consist of the authors and supporting scientists.

The news release was slated to come out days after an update to the National Climate Assessment — the "Climate Science Special Report" — was issued by federal agencies, including EPA. The assessment concluded, "Based on extensive evidence, that it is extremely likely that human activities, especially emissions of greenhouse gases, are the dominant cause of the observed warming since the mid-20th century."

"I think that measuring with precision human activity on the climate is something very challenging to do and there’s tremendous disagreement about the degree of impact, so no, I would not agree that it’s a primary contributor to the global warming that we see," he told CNBC’s "Squawk Box" in March 2017.

EPA officials did not respond to a request for comment for this story.

With the red-team approach, Pruitt’s intention "was to really attack the science behind the endangerment finding," a former administration official told E&E News last week.

The endangerment finding on greenhouse gases is a scientific determination that underpins EPA’s climate regulations, and many conservatives hope a red-team exercise will be used to unravel that finding. "Pruitt really believed that a red-team, blue-team exercise would go to the heart of challenging the science behind all this," the former official said.

First he’d have to get past the White House.

There was a constant "push and pull" between EPA and the White House last year over the red team, the former official said. The White House was "just trying to stall it."

After Pruitt’s aides circulated the draft release on Nov. 4 last year, Pruitt’s chief of staff, Ryan Jackson, sent it in the body of an email saying, "I think we are set. Good?"

But the next day, Jackson received an email from [email protected] — an address reportedly used by Pruitt. "Let’s discuss. Needs revision," the email said.

The New York Times reported that Trump’s chief of staff, John Kelly, learned about the planned news release and demanded that the red-team debate be delayed until top officials could discuss the issue.

"White House officials saw the draft press release from EPA and shut it down," someone familiar with the red-team process told E&E News last week.

In early December, EPA officials were still discussing the red-team effort behind the scenes. "We have two ways ahead to announce this and get this underway," Jackson wrote to several agency officials, including EPA air chief Bill Wehrum, on Dec. 5. President Trump had privately told Pruitt he supported the approach (Climatewire, Dec. 11, 2017).

It appears as though there was a plan for Wehrum to announce the effort in December.

"Ideally we will get [Pruitt’s] final edits and okay on this before he leaves for Morocco so Bill can make the official RTBT announcement on Tuesday," she wrote.

But the next week, Wehrum and other EPA aides were summoned to the White House, where they were told by Catanzaro, deputy chief of staff Rick Dearborn and others that the red team was "on hold" (Climatewire, Dec. 15, 2017). Catanzaro and Dearborn have since left the administration.

The emails also show how EPA staffers were working to publicize the red-team effort and control some of the negative press that came with it.

Jackson asked Steven Koonin — a former Obama administration official who was helping to organize the exercise — and Princeton University physicist William Happer to add supportive quotes to their press release.

"What is most helpful are a couple of quotes or a joint quote from you both about the importance of doing red team blue team," Jackson wrote.

Happer, who argues that more carbon dioxide is good for the planet, said in an interview last week that Koonin asked him to put together the red team for the review. He said he had assembled candidates for a "blue-ribbon team," although he declined to share his roster.

Over half of them were members of the National Academy of Sciences, he said, and some were foreign members who knew a lot about climate.

Last October, EPA officials were flustered by reports that a convicted sex offender had been included in a list of potential red-team members submitted by a conservative think tank.

HuffPost reporter Alexander Kaufman asked the agency whether officials were aware that Oliver Manuel, one of the names proposed for the team by the conservative Heartland Institute, had been convicted for abusing his daughter. (After Kaufman’s story ran, Heartland disputed that it was recommending Manuel for the red team and said he was just included on a mailing list.)

After receiving Kaufman’s request, EPA communications official Liz Bowman emailed her colleagues, saying of Manuel, "This guy CANNOT be on our red team or even IN THIS BUILDING."

Both Koonin and Happer said they haven’t heard much from EPA lately about progress on the red team.

In April, Happer was invited to EPA headquarters to hear Pruitt announce his plans to restrict which science the agency can use in regulations.

Pruitt "did say, ‘I’d like it to happen, but we’re stuck right now,’ something like that," Happer said.