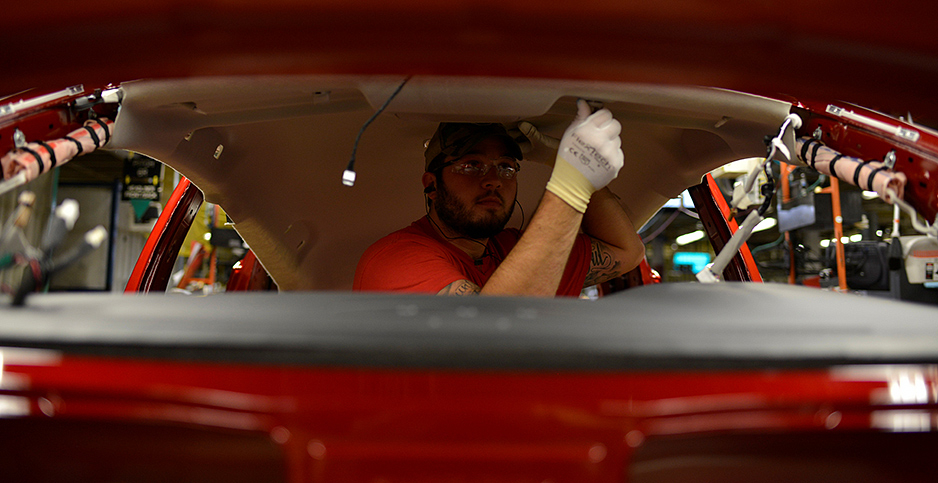 The White House contradicted EPA last week when it said that loosening economy standards would create jobs. A worker is seen at Nissan’s plant in Smyrna, Tenn. William DeShazer/Reuters/Newscom

The White House is claiming that its rollback of Obama-era clean car standards will lead to more jobs in the auto industry, contradicting an earlier finding by the administration that loosening the rules could lead to the loss of 60,000 positions.

The reversal came in response to a report released last week by the BlueGreen Alliance, a coalition of labor and environmental groups. The report found that the rollback threatens hundreds of thousands of auto manufacturing jobs in swing states that voted for President Trump in 2016 (Climatewire, Aug. 2).

The White House strongly pushed back on those findings. Spokesman Judd Deere said in an emailed statement to E&E News last week that the rollback "could increase new vehicle sales by 1 million through [model year] 2029, and will lead to more jobs for Americans."

Asked yesterday for data to support his assertion, Deere sent a list of talking points that promoted the rule change. The document didn’t mention new jobs.

The administration estimated in an analysis last summer that the rollback would lead to the loss of 60,000 jobs (Climatewire, Aug. 7, 2018).

Dave Cooke, a senior vehicles analyst at the Union of Concerned Scientists, said he thinks the White House press shop fired back at the BlueGreen Alliance report without looking at research on fuel economy and employment.

"I think this spokesman doesn’t know what he’s talking about. But that’s not his fault," Cooke said. "This is just the latest example of how the administration doesn’t actually understand how the auto industry works."

The White House wasn’t alone in asserting that weaker car rules could add jobs to the economy. A spokesman for the National Highway Traffic Safety Administration also weighed in last week.

EPA and the NHTSA sent a draft of the final rule to the White House Office of Information and Regulatory Affairs for review Friday. The review is expected to take about a month, and the final rule could be released around Labor Day.

The agencies are proposing to freeze fuel economy requirements at 2020 levels through 2026. That would allow cars to travel on average about 35 mpg rather than the 50 mpg mandated by President Obama.

Just as consequentially, the agencies are proposing to revoke California’s Clean Air Act waiver for greenhouse gases, which allows the state to set tougher tailpipe pollution rules than the federal government.

The BlueGreen Alliance report looked at what would happen if the Obama-era standards were left in place through 2025. It forecast that the standards would spur automakers to deploy a host of new technologies aimed at improving fuel efficiency. It also projected that thousands of workers would be hired and retained to build those new technologies.

For comparison, the report looked at what could happen if the Trump administration gutted the standards through 2025. It estimated that automakers and suppliers would cut back on their operations and up to 202,000 additional jobs would not materialize.

Zoe Lipman, director of the Vehicles and Advanced Transportation Program at the BlueGreen Alliance, said it’s no accident that the White House disputed the report about a month before the final rule’s release.

"We are seeing comment now because the agencies are realizing that they will soon have to defend a greatly weakened final rule that would have — should it be implemented — real, visible, negative impacts on American workers, manufacturing and competitiveness," she said.

Lipman added that the report was "directionally consistent with nearly a dozen studies since 2010 that show that strong standards drive dramatically increased investment in advanced technology, and therefore increase manufacturing jobs."

A report commissioned by the Union of Concerned Scientists last year looked at the economywide implications of the rollback, not just the impact on the auto industry. It found that 126,000 jobs could be lost by 2035, despite modest employment gains in the oil and gas industry as a result of consumers paying more at the gas pump.

John DeCicco, a professor at the University of Michigan Energy Institute, suggested the White House is anxious to defend its high-profile rollbacks of environmental regulations heading into the 2020 presidential election.

"As we move into the higher-pitched election season … it’s no surprise that this administration would make claims that lack a factual basis," he said.

Still, DeCicco said his research has led him to believe that clean car standards only have a modest impact on employment compared with broader economic policies.

"I think in this case, it’s difficult for me to agree with either side on this issue," DeCicco said. "And to be clear, I did some of the earliest studies on that topic over 20 years ago."

He added: "Jobs in this country largely depend on broader economic policy, trade policy and so on. The bottom line is that environmental regulations don’t kill jobs, but they don’t necessarily create jobs either."