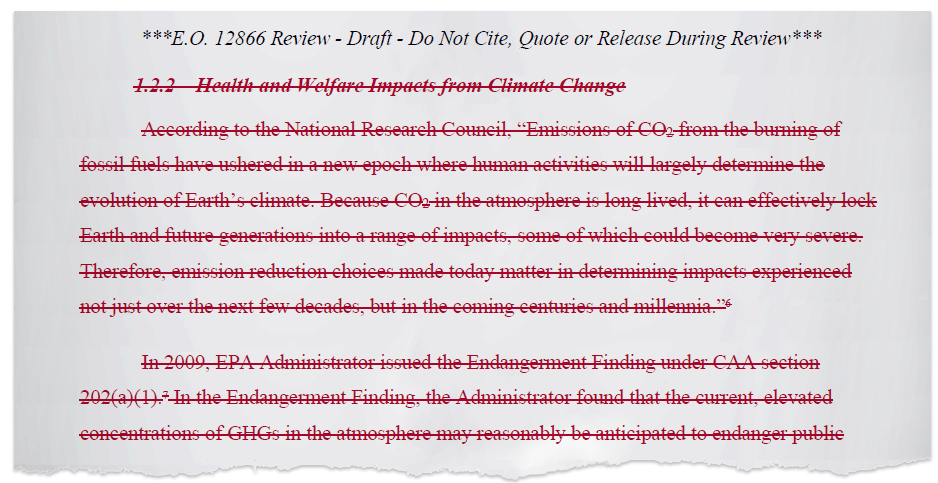 A draft of EPA’s Affordable Clean Energy proposal referenced the overwhelming scientific consensus that greenhouse gas emissions were worsening climate change and endangering public health, according to documents released on the site Regulations.gov. Those statements were nixed during an interagency review led by the White House.

The deleted language represents a stark admission by the Trump administration that its own proposal would have an adverse effect on human health and the environment — the two arenas that EPA is tasked with protecting.

An earlier draft of the plan’s regulatory impact analysis devoted more than 500 words to the consequences of a warming planet.

Since EPA’s 2009 ruling that greenhouse gases pose a threat to public health, "the climate has continued to change, with new records being set for a number of climate indicators such as global average surface temperatures, Arctic sea ice retreat, CO2 concentrations and sea level rise," said the draft language, which was first reported by Bloomberg.

"Additionally, a number of major scientific assessments have been released that improve understanding of the climate system and strengthen the case that GHGs endanger public health and welfare both for current and future generations," the draft said.

Another draft of the regulatory impact analysis contained similar language on the threats posed by elevated levels of greenhouse gases in the atmosphere.

"For health, the projected impacts include the increased likelihood of heat waves, negative impacts on air quality, more intense hurricanes, more frequent and intense storms and heavy precipitation and impacts on infectious and waterborne diseases," the draft said.

"For welfare, the projected impacts include reduced water supplies in some regions, increased water pollution, increased occurrences of floods and droughts, rising sea levels and damage to coastal infrastructure, increased peak electricity demand, changes in ecosystems and effects on indigenous communities," it said.

EPA spokesman John Konkus said the language was removed as part of the standard interagency review process at the White House Office of Management and Budget.

"As a result of the interagency review process, a number of changes were made to the proposed ACE rule and its accompanying materials," Konkus said in an email. "EPA looks forward to receiving comment on a variety of these issues during the public comment period."

Some of the deleted language appeared in the Obama administration’s regulatory impact analysis for the Clean Power Plan, which the ACE rule would replace.

The ACE proposal narrows how EPA would regulate the power sector compared with the Clean Power Plan, which never went into effect after being stayed by the Supreme Court. It would focus regulation on individual power plants, rather than the broader electricity grid.

The Trump proposal does not wade into challenging the endangerment finding, which provides the legal underpinning for EPA’s climate regulations. Far-right conservatives have urged the administration to upend the finding. Many experts, however, think the finding would be impossible to overturn because it would require refuting established climate science.