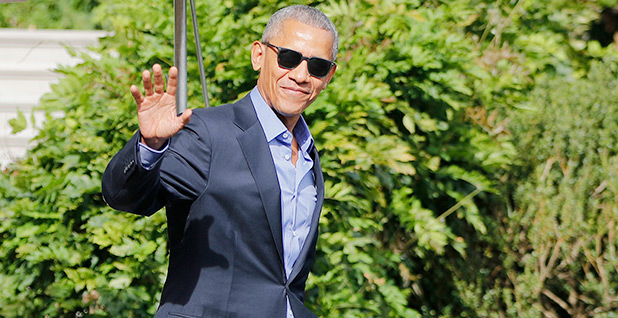 President Obama waves as he walks across the South Lawn of the White House. The Obama White House was engaged in the "messaging" for last year's rollout of U.S. EPA's big study on the safety of hydraulic fracturing, records show. Photo courtesy of AP Images.

The Obama White House was engaged in the "messaging" for last year’s rollout of U.S. EPA’s big study on the safety of hydraulic fracturing, records show.

The message of the study — that there are no "widespread, systemic" drinking water problems from fracturing — has cheered the oil and gas industry and angered green groups.

And it’s been criticized by EPA science advisers who say the language isn’t supported by the research in the study.

EPA documents obtained by EnergyWire under the Freedom of Information Act do not indicate what role, if any, White House officials played in developing the "widespread, systemic" language. EPA withheld drafts of messaging materials such as the press release and executive summary, and heavily redacted the documents that were provided.

But the emails and other records do show that the White House was interested and involved in the rollout of the study in June 2015.

The EPA team working on the study met several times at the White House with top aides on domestic and environmental issues. And as EPA prepared to release the fracking study, White House aides kept tabs on what the "topline messages" would be.

The team met in February and March 2015 with Candace Vahlsing, a senior policy analyst at the White House Domestic Policy Council, according to White House visitor records. Vahlsing had also been an energy and environment policy adviser to President Obama’s 2012 re-election campaign.

On May 4, 2015, a month before the study was released, the EPA team visited the White House again. Along with top staffers from Interior and Energy, they met with Dan Utech, Obama’s top aide on energy and climate issues.

Utech’s discussion with the study team focused on "messaging," according to minutes of a meeting held shortly after the White House session.

"The nature of the questions asked mostly focused around being clear on messaging," said the memo, circulated that evening among the EPA team working on the study.

The White House officials wanted a briefing and a copy of the agency’s talking points on the study before EPA officials previewed the report to state officials in mid-May, according to an email from EPA’s Jeff Frithsen. Frithsen, an associate director in EPA’s Office of Research and Development, guided the study and attended the White House meeting.

Three days after that meeting, an EPA official from the administrator’s office promised to Vahlsing that she would soon send wording of the "topline messages" EPA was proposing to use. The email to Vahlsing indicated she had requested the information, though it did not say when.

Vahlsing checked in the following Monday to renew her request. The next day, the EPA official sent an attachment with the top-line messages. In their release of documents to EnergyWire, EPA officials redacted the attachment.

At the same time, emails show the team overseeing the study was revising the press release, executive summary and other messaging items ahead of the rollout.

"Messaging for the assessment — please read — need your feedback by COB today," was the subject of a May 7 email to Frithsen from Dayna Gibbons, who led the communications effort on the study. Adding to the urgency, it was sent at 4:30 p.m.

EPA also sent Vahlsing an advance copy of its press release for the study the day before the June 4 rollout. It was also sent to Frank Benenati, who was a White House communications aide for energy and environmental matters. Benenati is now EPA’s associate administrator for the Office of Public Affairs.

Because of EPA’s redactions, it is unclear where the "widespread, systemic" language was first used.

The phrase "widespread, systemic" appears in four places in the 1,000-page report — twice in the executive summary and twice in the "synthesis" chapter. It also appears in the body of the press release announcing the study and in the second sentence of its headline.

The executive summary of the report stated that EPA researchers "did not find evidence" that fracturing had led to "widespread, systemic" problems with drinking water. The message was stronger in the press release, which said "hydraulic fracturing activities in the U.S. are carried out in a way that have [sic] not led to widespread, systemic" problems.

White House officials did not respond to a request for comment and a question about what role the White House had in developing the "widespread, systemic" phrase. EPA referred questions to the White House.

Obama has lauded the shale gas drilling boom, which was made possible by advances in hydraulic fracturing, for helping to reduce carbon dioxide emissions from power plants. In 2012, with oil and gas companies complaining about a haphazard regulatory approach to shale drilling, the administration tapped the brakes on several regulatory efforts.

His support has won him faint praise from industry but some measure of scorn from environmentalists. And the kinder, gentler approach has faded in the past year and a half as the administration has gotten increasingly tough on methane emissions from petroleum production.

It’s not wrong for political appointees at the White House to get involved in the rollout of a major EPA study, said Hugh MacMillan, senior researcher at the environmental group Food & Water Watch. But they shouldn’t inject politics into the science, and MacMillan suspects they did.

"In this case, the top-line messaging papered over where the science ends and where political considerations begin," MacMillan said. "We feel the EPA and the Obama administration owe the public an explanation."

But Katie Brown of the industry group Energy in Depth said the science of the report is clear and unaltered by politics.

"The data are what the data are," Brown said. "You can’t change that with messaging."

The study was requested in 2009 by congressional Democrats, who asked EPA to look into whether hydraulic fracturing harms drinking water.

The process was contentious from the beginning. Early on, drilling critics packed hearing halls for the "scoping" process, while environmental groups and industry lobbied to get their favored scientists on the peer review panel. The agency tangled with Halliburton Co. about what information the company should hand over, even issuing a subpoena at one point.

Years of research went into the draft that was released June 4, 2015. Though it noted that drilling activities had contaminated groundwater, it delivered a message that fracking is safe because it hadn’t caused "widespread, systemic" problems with drinking water (Greenwire, June 4, 2015).

Environmentalists fumed about language, saying EPA had turned a lack of data into proof that oil and gas drilling is safe. Oil and gas companies cast it as a long-awaited clean bill of health.

The report said the language needs "clarification and additional explanation." But a dissent by four science advisers with industry ties said the language was "accurate" and "supportable with the facts EPA has reviewed."

Click here for some of the documents cited in this story.