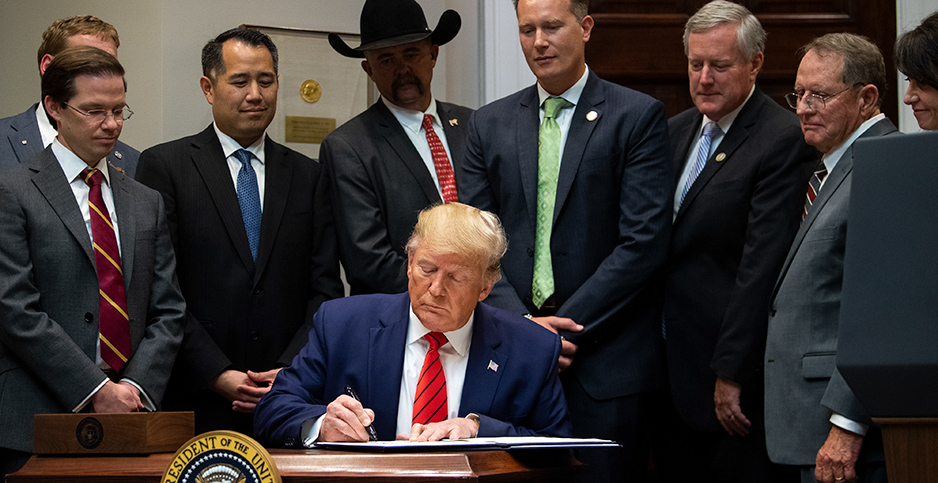 President Trump signing a pair of executive orders on regulations and agency enforcement last month. The Office of Information and Regulatory Affairs' acting administrator, Paul Ray (far left), was one of the officials present. Kevin Dietsch/UPI/Newscom

The Office of Management and Budget sent Gregory Conley, president of the American Vaping Association, an email Tuesday in the middle of the night to say his Friday meeting would not happen.

The White House regulatory shop —- known as the Office of Information and Regulatory Affairs —- has canceled meetings on reviews from health to environmental rules, leading some observers to suspect political meddling.

The trend, observers say, fits into the narrative that OIRA has been weaponized by the Trump administration’s deregulatory agenda.

"I don’t know if it’s deliberate or a chaotic environment over there," said Paul Billings, national senior vice president of the American Lung Association. "It is extraordinary."

On Tuesday, OIRA canceled 23 meetings that were scheduled through late November. The office held three meetings before canceling the rest, said Billings.

OIRA rebutted the notion that anything unusual was happening.

"OIRA handles all responsibilities and requests in the same manner as previous administrations. There is nothing abnormal here," a senior administration official wrote in an email.

The official added, "We look forward to not reading the next OIRA hit piece from E&E News."

The office oversees the regulatory process, and the length of the final review varies. Mandated by a Clinton-era executive order, the review includes a cost-benefit analysis of all regulations produced by federal agencies.

The office also meets with all requesting individuals or organizations — from companies subject to regulation to public interest advocacy groups.

E&E News reached out to a dozen or so industry sources and environmental organizations that have had meetings with the office.

Some expressed gripes about meetings being rescheduled or canceled or that the OIRA duty officer for the rule did not show up until the tail end of the meeting.

Others said that although it’s not unprecedented for OIRA to cancel meetings, the office generally is less powerful under the Trump administration.

"Rollbacks at EPA and other agencies and departments run the show; their schedules and demands dictate what happens with rules and OIRA reviews," said John Walke, clean air advocate for the Natural Resources Defense Council, who has had several meetings at the office.

"OIRA appears to be more like an afterthought than I have seen in any prior administration," said Walke. "This has resulted in OIRA reviews being short-circuited when longer reviews would interfere with the agencies’ rush to roll back safeguards."

Other advocates said their experiences were unusual but not necessarily bad. The office recently switched to an automated system that has helped track meetings in real time, Billings said.

Christopher Guith, senior vice president of the U.S. Chamber of Commerce’s Global Energy Institute, said the Chamber has not noticed any differences in access or professionalism at the Trump OIRA.

"OIRA serves a critical role in the regulatory process and we continue to enjoy working with the quality professionals, career and appointees alike," he wrote in an email.

But public interest groups argue environmentalists have been disadvantaged as the Trump OIRA has deviated from past administrations.

The "Trump administration has abandoned all of these preexisting norms of how Washington works," said James Goodwin, who tracks regulatory issues for the Center for Progressive Reform.

Yesterday, Earthjustice was scheduled to have a meeting on one of the EPA coal ash rules. But last week Lisa Evans, a senior attorney for the group, caught wind that EPA was planning to unveil the rule Monday — before her meeting. So she emailed the office and was able to reschedule.

"However, if we had not been proactive in rescheduling, we would have missed the window and the opportunity to meet with OIRA," she said.

"Part of the problem is the black box that OIRA is," Evans said. "I’ve been doing this for a long time, so I have some emails for people. A lot of people don’t even know that you have an opportunity to meet with OIRA prior to a rule being proposed."

Last month, OMB denied meeting requests from the California Air Resources Board and the National Association of Clean Air Agencies regarding its rollback of clean car standards (Greenwire, Oct. 2).

And in 2017, Thomas Cmar, an Earthjustice attorney, said he received an email from OIRA that simply said the agency "concluded review of the rule last night so we won’t be able to have a meeting now."

Cmar said OIRA finished its review the day final briefs were due on motions in litigation challenging the legality of EPA’s stay of the power plant effluent rule (E&E News PM, Sept. 21, 2017).

"So in this case, OIRA short-circuited its review process in order to allow EPA to issue a rule that would moot our lawsuit before a court could rule on its illegal stay of the effluent rule," Cmar said.

Amit Narang, who focused on regulations for Public Citizen, said he does remember the Obama OIRA on occasion canceled meetings. "But I know they were very sensitive to being viewed as ignoring business interests on regulations," he said.

Diane Katz, a regulatory policy senior fellow at the Heritage Foundation, said she didn’t know why the recent meetings were canceled.

In general, conservatives like OIRA because it provides oversight for the rulemaking process — and can at times delay new mandates.

"It’s not uncommon that a review at OIRA may delay a rule, but sometimes there are very good reasons for delaying a rule," she said.

Heritage has long advocated for OIRA to beef up its 50-person staff. That staff, Katz noted, is tasked with overseeing regulations that are drafted by some 5,000 bureaucrats.