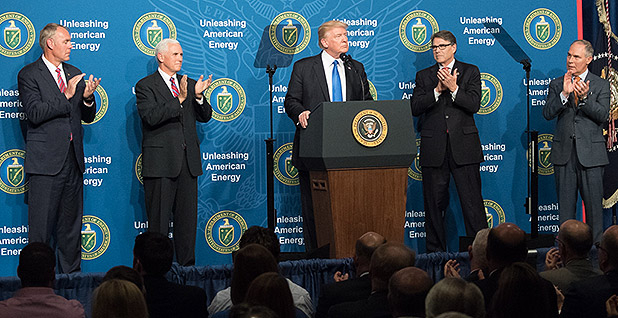 The White House’s $4.4 trillion budget request aims to shore up an "energy dominance" policy that in President Trump’s first year emphasized oil, gas and coal development and tried to sweep away environmental regulations.

The White House’s fiscal 2019 budget request rolled out yesterday slashed dollars for the Interior Department, U.S. EPA and parts of the Energy Department but, like last year, kept funding intact or even expanded it for programs that support expansion of fossil fuels.

"To accompany our efforts to cut spending and implement massive tax cuts and reforms for American families, workers and businesses, we will continue to relentlessly target unnecessary regulations for elimination," the budget blueprint says. "We will also continue driving America toward energy dominance and making the United States a net energy exporter by 2026."

References to renewables were sparsely distributed throughout the document, despite promises by some members of the administration that the federal government is taking an "all of the above" approach to energy development.

Interior’s $11.7 billion budget request includes $73 million to go toward permitting renewable energy on public land to "keep pace" with anticipated interest in solar and wind power, according to a department news release. For fiscal 2018, Interior requested $78.1 million to reflect expected demand (Energywire, May 24, 2017).

The White House blueprint also touted the administration’s wide-reaching deregulatory strategy, the effects of which will ultimately pack a stronger punch than proposed spending cuts that are unlikely to find traction on Capitol Hill.

"We regard these proposed top-line cuts as largely symbolic (they have little chance of surviving a 51-49 Senate when overriding a filibuster requires 60 votes)," ClearView Energy Partners LLC wrote in a note yesterday. "In any case, Congressional appropriators have yet to finalize their FY 2018 spending packages."

"Both the budget and infrastructure plans include new ideas to address infrastructure and maintenance challenges on public lands," House Natural Resources Chairman Rob Bishop (R-Utah) said in a statement. "The Committee looks forward to reviewing these proposals, along with other concepts within the budget, to expand access and improve management of federal lands and resources."

Bishop’s Democratic counterpart dismissed attempts by the administration to use energy revenues to pay for national park maintenance and other Interior Department priorities.

The proposal marries the "future of national parks to the fate of Trump’s unserious ‘energy dominance’ agenda," according to an email from Arizona Rep. Raúl Grijalva’s office.

Interior Secretary Ryan Zinke told reporters yesterday that his department is "done" focusing on its energy portfolio and is turning to another top priority: reorganization.

But the numbers and priorities laid out in the White House budget blueprint, which proposes a 16 percent cut for Interior, suggest energy development remains a driver.

The department’s offshore permitting and safety bureaus received a collective $51 million bump, which includes a $9 million increase to update the Bureau of Ocean Energy Management’s five-year plan for energy production on the outer continental shelf. The draft strategy would open more than 90 percent of federal waters to development (Greenwire, Jan. 4).

But the plan goes beyond oil and gas extraction, Zinke said during a conference call yesterday. It’s about offshore wind, too.

Zinke said he will be relying on local voices to tell him where the ocean’s wind energy potential lies. He said he maintains that the best opportunity for solar installations remains "on the roof of a house," rather than on public lands.

Interior also set aside $18 million for a departmentwide reorganization, which could include the recombination of BOEM and its sister agency, the Bureau of Safety and Environmental Enforcement.

"We’re still looking at it pretty hard," Zinke said yesterday, adding that he and his staff are still assessing the "unintended consequences" of re-merging the offices.

The department should have a decision in 90 days, he said.

As Interior expands onshore and offshore energy development, the department expects to raise $18 billion over a decade to fund a parks infrastructure backlog totaling more than $11 billion, according to the budget document.

Zinke has pointed to BOEM’s proposed expansion of its offshore energy program as a critical offset for the shortfall. He often cites offshore drilling revenues from 2008, a banner year for the industry, as an example of an opportunity for Interior to pull in more funding for parks (Climatewire, June 26, 2017).

"The framework is a win-win for America," Randall Luthi, president of the National Ocean Industries Association, said in a statement yesterday. "Offshore energy is an investment, not an ATM, and this budget recognizes that distinction."

"Energy dominance" prominently features in the Trump administration’s descriptions of budget priorities for DOE, which would receive $30.6 billion under the president’s budget proposal, on par with its fiscal 2018 funding — although before the congressional budget deal passed last week, the department would have seen a 3 percent haircut under the president’s proposal (Greenwire, Feb. 12).

"The United States has among the most abundant and diverse energy resources in the world, including oil, gas, coal, nuclear, and renewables," according to the budget proposal. "The ability of entrepreneurs and businesses to commercialize technologies that take full advantage of those resources is paramount to promoting U.S. economic growth, security, and competitiveness."

The proposal is attempting to balance the administration’s preference for using federal dollars on basic science and early-stage research with the priorities of U.S. industry and push for U.S. technological advancement.

"The Budget focuses resources on early-stage research and development (R&D) of energy technologies and reflects an increased reliance on the private sector to fund later-stage demonstration and commercialization activities," the White House said in describing that balance. "In so doing, the budget emphasizes energy technologies best positioned to enable American energy independence and domestic job-growth in the near- to mid-term."

The president’s budget would significantly boost funding for research and development activities in fossil energy, in part through an injection of $200 million for "clean coal technologies" secured through last week’s congressional budget deal. That would bring fiscal 2019 fossil energy R&D to $502 million, up from $425 million in fiscal 2018.

Part of that office’s funding goes to the National Energy Technology Laboratory, which works on "the extraction, processing, use, and disposal of mineral substances without objectionable social and environmental costs." Noting that NETL has labs in West Virginia, Pennsylvania and Oregon, the budget request "initiates an effort to consolidate NETL’s multi-site footprint to the extent beneficial to a single operational complex," the document says.

After two years of funding at $221 million, the president’s budget request proposes to trim funding for the Strategic Petroleum Reserve to $180 million. Congress last week agreed to sell off 100 million barrels of crude from the SPR, while also laying the groundwork to fund some maintenance and repair needs from oil sales (E&E Daily, Feb. 9).

The president proposed to "disestablish" the Northeast Gasoline Supply Reserve in fiscal 2019, as it did last year, noting that "the NGSR has not been utilized and has issues surrounding cost efficiency and operational functionality." The NGSR was established in 2014 in response to the chaos that followed Superstorm Sandy, when dozens of ports and refineries that supply New England with gasoline were shut down, leading to prolonged fuel shortages in the region.

The budget also proposes to "reexamine" the need for the Northeast Home Heating Oil Reserve, which provides short-term emergency supplements to heating oil supplies in the Northeast.

At EPA, the administration is proposing an 18 percent cut in the enforcement division.

The idea is to offer on-site walk-throughs of facilities within one year of a request. The agency would offer reports to the facilities to help them comply with regulations.

The budget also proposes a $3.4 million cut to the grants that EPA provides to states to implement the underground injection and control program. The program regulates injection wells, such as oil field wastewater disposal wells, to protect drinking water.

It also proposes a $159,000 cut to a study of the performance of oil dispersants in deep waters and Arctic spills.

"Wealthy polluters win, families lose — that’s Trump’s budget in a nutshell," Earthjustice President Trip Van Noppen said in a statement yesterday. "He has once again thrown down a damaging, backward-looking plan of extreme cuts that threaten the water we drink, the air we breathe, the parks and wildlife we treasure, and the communities where we live and work."

Van Noppen called on lawmakers and governors to resist the White House plan.

Mick Mulvaney, director of the Office of Management and Budget, is scheduled to appear before the Senate Budget Committee this morning. He will testify in the House tomorrow.