White House plans to ‘close out’ Energy Star, other programs 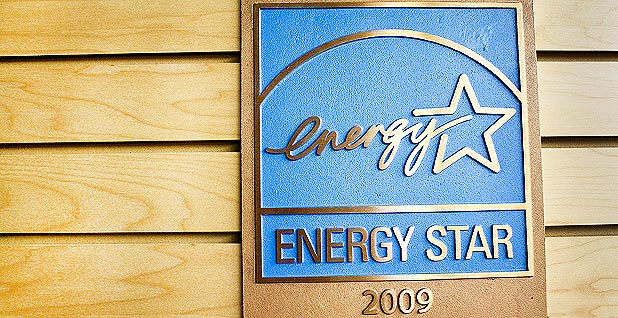 The White House is said to be considering cuts to the Energy Star program, a popular efficiency standard used on a large number of products. Photo by MoneyBlogNewz, courtesy of Flickr.

A preliminary budget proposal from the White House would eliminate federal leadership of Energy Star, a popular voluntary program for companies to seek labels for energy-efficient consumer products and appliances.

A spending blueprint would slash Energy Star and related programs, leaving $5 million "for the closeout or transfer of all the climate protection voluntary partnership programs," noting that achieving that might require changes to authorizing legislation from Congress.

"EPA should begin developing legislative options and associated groundwork for transferring ownership and implementation of Energy Star to a non-governmental entity," the draft reads, according to a source who has viewed the document. "EPA should also explore similar transfer opportunities for the remaining partnership programs as well."

The White House and U.S. EPA are still passing the budget back and forth, although President Trump wants to cut the agency’s $8.2 billion spending by about a quarter to help increase defense spending. Congress will also have to sign off on those levels.

Energy efficiency advocates and state regulators say Energy Star is one of the programs that it doesn’t make any sense to cut, because it saves people money while benefiting the environment.

"Some of the most successful programs, mandatory and voluntary, like [the Diesel Emissions Reduction Act] and Energy Star, are slated for elimination notwithstanding their bipartisan and significant support among stakeholders," said Bill Becker, head of the National Association of Clean Air Agencies.

Energy savings experts say a nongovernmental Energy Star program, perhaps one run by industry, would not be as trusted or effective.

"An internal industry label is not going to be as effective, is not going to be as reliable," said Lowell Ungar, senior policy adviser at the American Council for an Energy-Efficient Economy (ACEEE). "The consumers aren’t going to know whether that really is representing energy savings and savings in their wallet."

Ungar called Energy Star the "most successful voluntary energy efficiency program in the world." He noted that in surveys, 90 percent of consumers recognize the Energy Star brand. More than 5.5 billion products have carried the label since the program began in 1992, he said. Buildings also can be Energy Star-certified.

Energy Star spends about $50 million through EPA and $7 million through the Department of Energy, according to ACEEE. The Obama administration said it saved consumers and businesses $34 billion in electricity costs and prevented more than about 300 million metric tons of greenhouse gas emissions in one year while improving ambient air quality.

Industry trade groups that use the Energy Star label don’t want to jeopardize the brand, although they have recommended changes to the program over the years.

Doug Johnson, vice president of technology policy at the Consumer Technology Association, said he was "not surprised to see it presented as something that could go away."

CTA has supported and promoted Energy Star over the years as the "premier public policy for advancing energy efficiency in electronics," Johnson said.

But he noted that aside from government-mandated regulations and labeling programs, voluntary agreements can also promote energy efficiency.

Talking to ‘everyone’ in White House

Johnson argues that regulations aren’t a good fit for tech products. He said that while voluntary labeling systems like Energy Star and EnergyGuide have been the public policy for years, voluntary agreements are "growing in importance in North America and overseas."

Johnson said the Energy Star "brand could still exist without the formal program, potentially as something that is licensed, perhaps."

He said consumers would know if companies fudge their numbers.

"Competitors are constantly testing and checking each other’s products, that’s for sure," he said.

Ungar countered, however, that "having an independent agency in charge of this provides some reliability that the criteria are set at a level that is actually efficient as opposed to what products are normally."

"Typically, Energy Star tries to set the label at a level that about 25 percent of products meet for a given item, and you then can see over the next few years that level increases because companies want to achieve and want their products to have the Energy Star [because] it helps sell products," Ungar said.

While CTA generally supports Energy Star, Johnson argues that manufacturers have faced increasing costs to participate in the program.

CTA represents makers of electronic products, like computers, monitors and set-top boxes, which account for about 60 percent of electricity savings under Energy Star, according to Johnson.

A 2010 Government Accountability Office report showed Energy Star’s certification process was vulnerable to fraud and abuse. GAO was able to get certifications for 15 bogus products.

After that, Energy Star began requiring third-party certification of energy savings. Johnson says the requirement is meant more for appliance manufacturers, though. CTA supported a provision in last year’s Senate-passed energy bill that would have addressed the requirement.

The Department of Energy had a bigger role with the program before the Obama administration shifted authority mostly to EPA, said Kevin Messner, senior vice president of policy and government relations with the home appliance group.

Messner said the association’s "main and only push right now" is to move Energy Star back to DOE.

DOE already handles federal minimum standards that makers of refrigerators, washers and dryers must meet, including under EnergyGuide requirements where they must disclose energy use, Messner explained. EPA also has been using Energy Star to encourage other kinds of environmental improvements outside energy efficiency, Messner argued.

Messner said AHAM members have had problems because the program is split between two agencies that don’t coordinate enough.

"We have been talking to anyone and everyone in the Trump administration," Messner said last week.