White House plots next step in battle over Yazoo Pumps 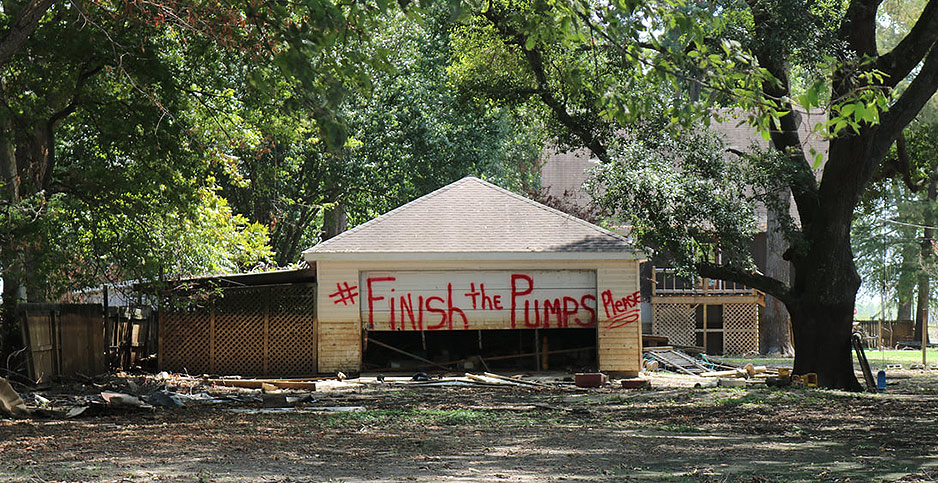 Graffiti promoting a campaign to "#Finish the Pumps." Opponents have campaigned to "#Dump the Pumps." @usaricenews/Twitter

A controversial flood control and drainage project in Mississippi that EPA vetoed more than a decade ago is aggravating old tensions among environmental groups, lawmakers and agricultural groups in the Magnolia State as the Trump administration plans its next move.

Today marks the last day the Army Corps of Engineers is accepting public comment on its proposal to revive the World War II-era Yazoo Pumps project, which EPA in a rare move killed in 2008 under the George W. Bush administration.

The Trump administration maintains the project is very much alive despite that veto.

The Army Corps says the project is needed to address historic flooding on the Mississippi River that claimed two lives last year and caused hundreds of millions of dollars in damage. The agency also maintains the pumping project has been "extensively reformulated" over the past six decades to balance reducing floods with environmental protection.

Consumer advocates and environmental groups opposed to the project rallied allies ahead of the public comment period’s end. They say the $440 million pumping station is unnecessary, costly and possibly illegal given it’s already been vetoed. Proponents including Republican Sen. Roger Wicker of Mississippi and other lawmakers, state officials and agricultural groups counter that the pumps are critical for controlling the volatile Mississippi River to protect farmland across the Mississippi Delta, Arkansas and Louisiana.

"Join the campaign to Finish the Pumps!" tweeted one agricultural group in favor. "Dump the Pumps," reads a countermessage from the Sierra Club.

The pump station, first proposed by the Army Corps in 1941, would be located in the Yazoo Backwater Area, a 630,000-acre area between the Mississippi and Yazoo rivers in west-central Mississippi plagued with flooding.

Although the Yazoo Backwater Levee was built at the site in 1978 to reduce flooding risks, the Army Corps says the levee traps water from the 4,093-square-mile drainage area and creates an artificial lake containing agricultural runoff and organic matter from nearby forests that’s "uninhabitable by nearly all species."

During peak flood events, the pumps would move floodwater from semidrained uplands into the Mississippi River (Greenwire, April 17).

But critics like Louie Miller, director of the Sierra Club’s Mississippi chapter, say according to the Army Corps’ own data, 68% of the area would still continue to flood even if the pumps are built.

Miller, along with groups like the Audubon Society and American Rivers, is pushing for alternative flood control practices, including elevating homes and compensating farmers to restore crops back to wetlands.

He also maintains EPA’s 2008 veto is defensible in court.

"This is settled case law," Miller said. "My question is, how did the corps decide, other than political pressure, to reopen a supplemental EIS … on a project the EPA vetoed? How are we back here right now?"

EPA originally vetoed the Yazoo Pumps in 2008, finding the benefits of protecting 1,000 homes, businesses and farms near the confluence of the Yazoo and Mississippi rivers from flooding weren’t worth the destruction of between 67,000 and 200,000 acres of floodplain wetlands critical to migratory birds’ habitat.

EPA’s decision was later upheld by the 5th U.S. Circuit Court of Appeals.

But in April, the Army Corps’ Vicksburg District issued a notice of intent to prepare a supplemental environmental impact statement to the 2007 final EIS. The Army Corps said new data showing the danger to wetlands and aquatic life from current flooding is reason enough to take another look at the need for the pumps.

That new data, the Army Corps added, indicates the effect on wetlands and aquatic resources caused by a pumping plant would have been less than originally calculated in a 2007 reformulation study and the final EIS that EPA rejected.

Brandi Jenkins, director of outreach and external engagement for EPA’s Region 4 office in Atlanta, said in an email that EPA recognizes the disruptive impacts of flooding along the lower Mississippi River and the Yazoo Backwater Area on the day-to-day lives of Mississippians and the economy of the area.

"We have heard first-hand from residents as well as local, state and federal elected officials about the urgent need for flood control," Jenkins said, adding that EPA is a cooperating agency on the proposed project.

"We remain committed to working actively and cooperatively with the USACE on the potential flood control options they are considering as they relate to our National Environmental Policy Act and Clean Water Act programs," Jenkins wrote. "Our shared goal is to support a long-term, viable solution."

The Army Corps’ reconsideration has ginned up discussion about the fate of those wetlands.

On Friday, the Board of Mississippi Levee Commissioners sent a report to the Vicksburg District of the Army Corps, which found removal of floodwater helps, rather than hurts, environmental resources.

The board urged the Army Corps to complete the pumps, arguing that the structures would have prevented $372 million in agricultural damages had they been in place from 2008 to 2018. The board commissioned the report from Georgia-based engineering firm Pond, which based its findings on available scientific literature and data.

Wicker has also emerged as a vocal supporter, and in a letter to District Commander Col. Robert Hilliard last week he reiterated his support for the Yazoo Pumps project, writing that repeated, damaging backwater floods during the past decade have harmed the people, economy and environment of the South Mississippi Delta.

The senator wrote that the pumps would also protect wetlands, which currently face long periods of stagnant backwater conditions when floodwaters are retained by the Yazoo Backwater Levee but then are unable to wash out without the pumping station.

"As designed, the feature would turn on at 87 feet, an elevation that leaves over 200,000 acres in wetland conditions," he wrote. "If USACE completes this project, these wetlands would be retained and even improved."

But Miller said conducting an environmental analysis on a project that has already been vetoed would violate the Clean Water Act and the National Environmental Policy Act, adding that the courts have already backed EPA’s veto.

Miller and other groups also say there are other methods for controlling flooding in the delta, including programs that are currently funded and accepting proposals at the Department of Agriculture, Department of Housing and Urban Development, and Federal Emergency Management Agency.

As for the board’s research, Miller said it’s a "red herring" and not based on new or peer-reviewed information. The pumps, he added, would drain 200,000 square miles of wetlands to mainly benefit agricultural interests.