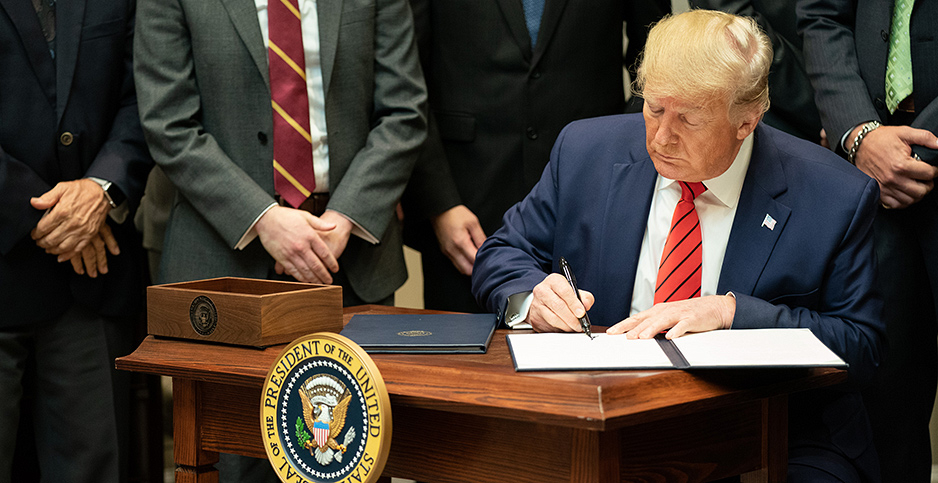 Dozens of people are using a public comment period on a White House memo to praise President Trump, underscoring the lack of rules surrounding the way agencies collect citizen input.

Some people who have submitted comments talk about "bureaucratic bullying." Several shame "the Democrats." Others simply offer blanket support for Trump.

Victoria Simmerson wrote, "I WHOLEHEARTEDLY support President Trump’s efforts to ‘Drain the Swamp’ & I believe this is a good beginning."

The memo could lay the groundwork for significantly weaker enforcement should Trump win a second term. It’s part of the president’s deregulatory agenda.

During a Fox News town hall event last night, Trump said his EPA was "very tough, but we get things done, and we’re taking regulations off like nobody’s ever seen."

Few of the roughly 150 comments filed so far to the White House enforcement memo have offered substantive input.

Several people equated enforcement with "bullying." "Boy, If there’s anybody, in this country, that has a better understanding and personal working knowledge of the term ‘bullied’ than President Donald John Trump, I’m not aware of their existence," said one.

A commenter identifying as Tho. Jeff. Cuppett IV Cuppett asked: "What would Thomas Jefferson Do about the FISA Court and DC Democrats Spying and bullying President Trump???"

Many comments tangentially hit on the libertarian-esque notion that the government frequently abuses hardworking Americans.

"We should not be punished for failure to know rules that a Washington bureaucrat has intentionally made obscure," said a commenter.

Another wrote: "We need to have cameras in ALL Federal (and State and local too) courts."

At first glance, James Goodwin, a regulatory expert at the Center for Progressive Reform, thought the comments appeared "boty."

"Hard to say because that’s how my uncle’s pro-Trump emails read, too," he said. "But it does strike me as weird that just regular folks would be commenting on a notice that hyper-technical and specific."

Richard Pierce, a regulatory professor at George Washington University who submitted several pages of comments on the memo, thought Trump would use the comments as the basis for an upcoming executive order that would make it "extremely difficult and time consuming to conduct any enforcement proceedings."

"He will also order agencies to limit their investigations in both number and duration," he wrote via email.

The Regulations.gov comment process is a bit of a Wild West. There are no requirements forcing people to identify themselves, and commenters can post as many times as they like.

Generally, the issue of comments in rulemaking has caught the attention of Sens. Rob Portman (R-Ohio) and Tom Carper (D-Del.), who lead the Senate Homeland Security and Governmental Affairs Subcommittee on Investigations.

Last fall, the subcommittee launched an investigation into fake comments. It surveyed 14 agencies and found that none of them, in administrations from both parties, has taken sufficient action to prevent posting fake comments.

The panel also noted that the Regulations.gov website plays host "to a significant amount of profane and abusive content."

In January, the General Services Administration hosted a public meeting to improve transparency and public access in public comments. It’s unclear what came of that effort, and the agency did not return a request for comment.